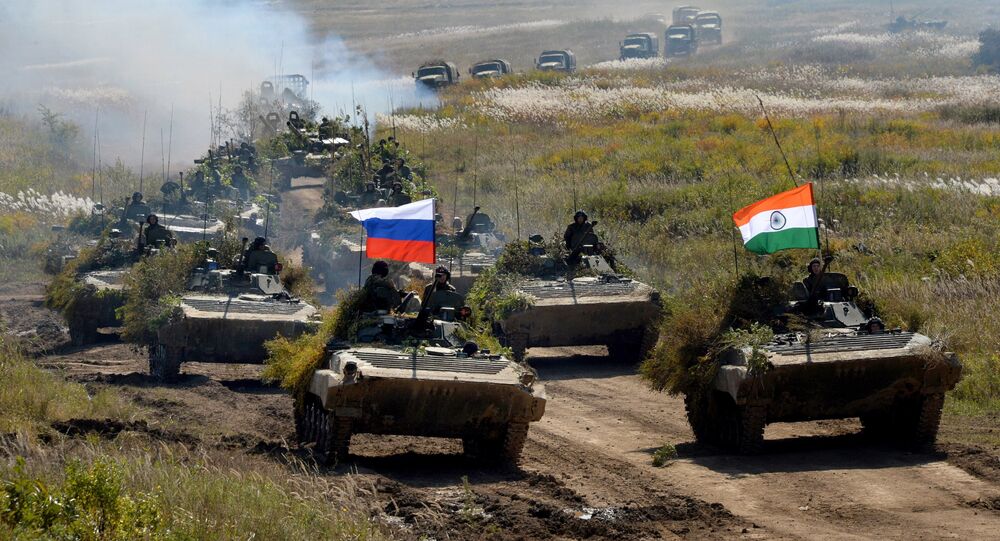 "Last year, we successfully conducted anti-terror and naval exercises. This fall we plan to conduct the first joint interspecific military exercises ‘Indra-2017’ in the Eastern Military District," Shoigu said during a meeting of the India-Russia Intergovernmental Commission on Military-Technical Cooperation.

"The military partnership is an important element and a pillar in Russian-Indian strategic cooperation. Joint military exercises are an especially important aspect of the cooperation," Shoigu explained.

Between late September 2016 and early October 2016, Russia and India held military drills in Primorsky Territory in the Russian Far East. Over 500 servicemen and up to 50 military vehicles participated in the exercise.

"We are determined for further strengthening of the cooperation aimed at increasing the combat readiness of our countries' armed forces, the exchange of experience in various spheres of military affairs," Shoigu said after signing a road map for the development of military cooperation between the two states.

He added that the road map would be the fundamental document on which the planning of bilateral relations would be based.

India is the foremost importer of Russian military equipment, reportedly accounting for up to 70 percent of the country's Armed Forces equipment.

The intergovernmental commission was created in 2000 for the purpose of coordinating military and technical applications between Moscow and New Delhi. Partnership activities have been carried out between Russia and India from 2011, and will continue until 2020, based on the decisions established at the intergovernmental agreement of 2009.

The program stipulates the implementation of nearly 200 joint projects, including the supply by Russia of its Sukhoi Su and Mikoyan MiG aircraft. As for joint production collaborations, under the BrahMos Aerospace Russian-Indian joint venture, BrahMos cruise missiles are manufactured by both countries.