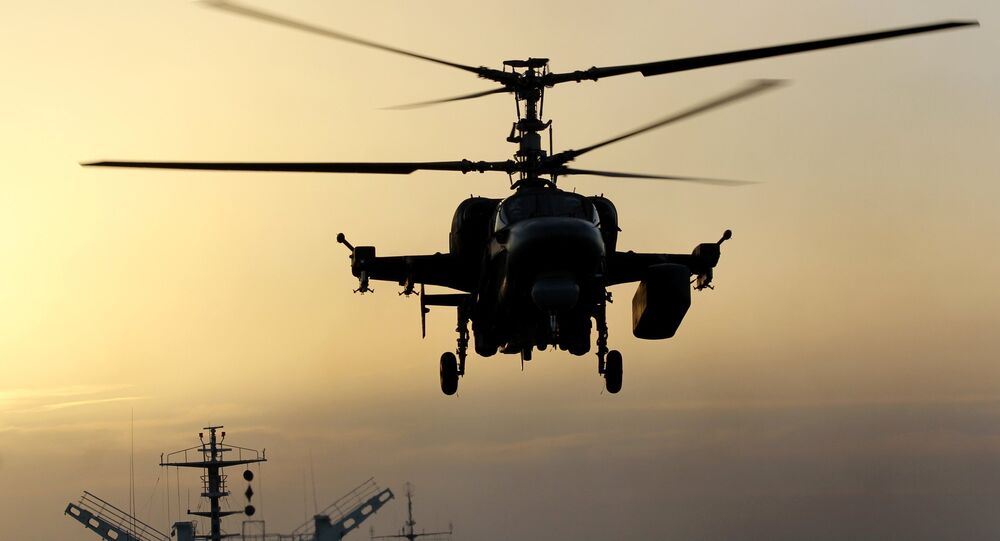 Commenting on Russia winning the bid to supply its ship-based helicopters to Egypt, Russian military expert Viktor Litovkin said that the supply of the Ka-52Ks is part of Russia's large-scale return to the Egyptian market for military orders.

"Russia won that tender. It is important now to agree on the technical configuration Shugaev told reporters about at the 2017 International Paris Air Show at Le Bourget.

In August 2015, Paris and Moscow formally terminated the 1.2-billion-euro deal on the construction and delivery of two Mistral-class helicopter carriers, as France had refused to transfer them to Russia over its alleged role in the Ukrainian conflict.

Shortly afterwards, then-French President Francois Hollande confirmed that a deal had been reached with Egypt on the delivery of the two Mistrals.

The Ka-52K is a naval modification of the Ka-52 Alligator reconnaissance and combat helicopter, which is designed to destroy armored vehicles, perform fire support operations, and conduct patrol and escort missions.

Speaking to Sputnik, Russian military expert Viktor Litovkin said that it is only natural that Russia won the bid to deliver the Ka-52K helicopters to Egypt because they were originally designed to be used on the Mistral-class ships.

"The tender is not yet a contract, but given that as our 'Katran' does not have competitors, there is 95-percent certainty that we will clinch a contract with Egypt for the supply of these helicopters… That is, we will capitalize on these Mistrals ships after France thoughtlessly gave up sending them to us, yielding to US pressure," Litovkin said.

He added that "Americans, as our competitors, are doing their best to push Russia back and impose their own equipment on partners in order to help the US military and industrial complex to make a profit."

"We are currently returning to Egypt with our own military equipment. Apart from helicopters, we will supply air defense systems like the S-300, the S-400, the Tor and the Buk. In other words, we are cutting off a large piece of the Egyptian market from the Americans. This is a great success for our defense industry, our [state arms export agency] Rosoboronexport, which is actively operating in the Middle East market," Litovkin said.

He also touted the Ka-52's unique characteristics, recalling that the helicopter features a coaxial rotor system which allows for superior maneuverability.

"This is a very formidable weapon, and there is no such class of 'copters in the US, France, Italy or Germany. The Ka-52K is a unique helicopter which is only in service in Russia," Litovkin said, adding that the Egyptian Armed Forces will most likely also use the helicopter.