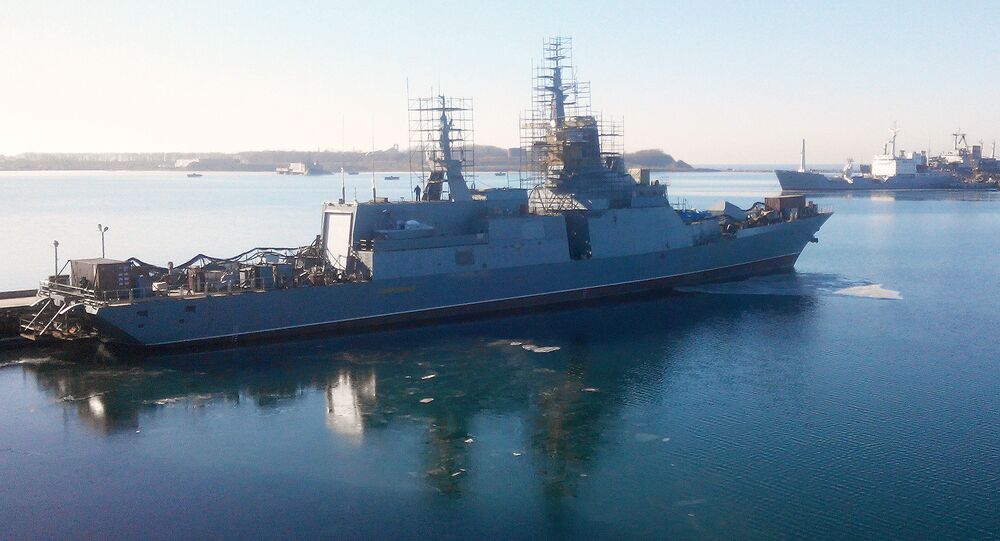 The newest Steregushchy-class corvette, the Sovershenny ('Unbeatable') has begun sea trials, the Russian Pacific Fleet reported on Monday. Armed with the latest missile technology and fitted with advanced radar, stealth and electronic warfare systems, the warship is expected to significantly improve the Pacific Fleet's defensive capabilities.

Laid down at the Amur Shipyard in 2006 and launched in 2015, the Sovershenny will be the fifth Steregushchy ('Vigilant') class, Project 20380 corvette to be commissioned into the Russian Navy, and the first to join the Pacific Fleet. The Steregushchy class is Russia's newest corvette design, and with a displacement of 2,200 metric tons, is designated by NATO as a frigate.

The vessel will undergo testing of its power plant, steering systems, auxiliary equipment, communications, detection and navigation equipment, as well as anchoring mechanisms. In addition, according to Vladimir Matveyev, a spokesman for the Russian Pacific Fleet, "high-speed movement, maneuvering and vibration testing will also be carried out."

© Sputnik
If Admiral Kuznetsov is So Insignificant, Why Did the UK Go Ballistic About it?
Together with ordinary sailors, the ship's trial crew includes specialists from various departments of the Amur Shipyard, as well as various contractors, who are tasked with assisting and monitoring the tests.

"The manufacturers' sea trials are an essential stage in completing the process of construction of any ship," Matveyev noted.

The Sovershenny, a 104.5-meter long, diesel-powered vessel with a crew of 90-100 officers and able sailors, is classified by the Navy as a multi-purpose vessel designed for coastal defense. The warship is armed with the latest guided missile systems, which are designed to engage surface ships and submarines, but also to provide shore bombardment support for amphibious assaults.

© Photo : Amur Shipyards
Profile view of the Sovershenny, expected to be delivered to the Pacific Fleet in the near future.

© Wikipedia
Russia's Admiral Gorshkov-Class Frigate Tests to Begin in February, Handover in July
With a range of 4,000 nautical miles and a top speed of 26 knots, Sovershennyy and its sister ships are capable of remaining at sea for 15 days before requiring refueling and/or replenishment.

The vessels are equipped with a powerful arsenal of modern air and surface-search radar and electronic equipment, including electronic warfare systems and stealth technology, aimed at reducing the ship's radar signature.

At the stern of the ship there is a helipad for the Ka-27 anti-submarine warfare helicopter.

© Sputnik / Ildus Gilyazutdinov
Amur Shipyards workers and the vessel's crew gather for the launch the Sovershenny corvette, built for Russian Navy's Pacific Fleet. 2015.
© Wikipedia / US Navy
Russia to Send Specialists to Syria to Assist in Overhaul of Local Warships
The first Steregushchy-class ship, the Steregushchy, was commissioned into the Baltic Fleet in 2007. Since then, three more vessels of the class were commissioned, all of them for the Baltic Fleet. The Sovershennyy will be the first heavy corvette to be introduced into the Pacific Navy, with the Gromky expected to follow soon after. In all four Steregushchy-class vessels are under construction, with another 12 planned. In total, the Navy hopes to receive at least 30 ships. Steregushchy-class corvettes are designed to replace the Grisha-class, built for the Soviet Navy between 1970 and 1990.

Foreign buyers have also shown interest in the Steregushchy-class corvette, with two ships under construction for the Algerian Navy, with up to four more planned. The export version, known as Project 20382 Tigr, has an estimated price tag of between $120-150 million US per ship. These vessels are expected to be equipped with P-800 Oniks anti-ship supersonic missiles in addition to their compliment of 3M24 Uran missiles.