Russia's 21300C "Dolphin" search and rescue ship has interested the Vietnamese military because it boasts a range of capabilities not found in its foreign counterparts, the ship's head constructor Alexander Forst told Sputnik.

Early last month, the Vietnamese military asked Russian diplomats for information about the price of the rescue ship and its equipment; India has also expressed an interest.

The 21300C is constructed at the Almaz Central Marine Design Bureau in St. Petersburg, which has so far provided one of the ships to the Russian Navy, named "Igor Belousov" in honor of the outstanding shipbuilding engineer.

The ship's primary purpose is search and rescue, and it boasts advanced equipment for finding ships and submarines in distress, as well as hydrographic equipment for studying the physical features of oceans and coastal areas.

The Igor Belousov search and rescue ship during sea trials.

The head constructor of the 21300C Dolphin, Alexander Forst, told Sputnik that years of experience enabled the Almaz shipyard to produce the sought-after ship.

"In the 1960s the Soviet search and rescue fleet was recognized as the best in the world. It is true that these traditions became a little lost, but the rich traditions accumulated over decades and sea rescue experiences are embodied in this ship," Forst said.

The ship can carry out a full range of rescue operations, and is fitted with radar, sonar and aerial technology, enabling it to find missing accident victims, navigational instruments and communications.

© Sputnik / Vitaliy Ankov
The operation panel of the altitude chamber at the Igor Belousov search and rescue vessel during a submarine crew rescue drill by the sea rescue service of the Pacific Fleet in the Peter the Great Gulf
"Here Dolphin's capabilities are similar to analogous foreign models from Italy, Japan, Korea, Sweden and China. However, it also has some unique characteristics. Firstly, its deep-water apparatus gives it increased seaworthiness during operations. The second feature of Dolphin is the stationary decompression station, which provides a safe descent for divers and effective decompression for rescued submariners."

© Sputnik / Vitaliy Ankov
The Igor Belousov search and rescue vessel lifting on board a Bester-1 deep submergence vehicle during a submarine crew rescue drill by the sea rescue service of the Pacific Fleet in the Peter the Great Gulf
Two Katran fast rescue boats are also on board the 21300C, whose engines are powerful enough to tow life rafts from the emergency vessel. The Katran are fitted with special devices to pull stricken sailors out of the water, even if they have lost consciousness.

The 21300C is also equipped with the "Bester" standalone deepwater rescue apparatus, which is capable of diving to a depth of 720 meters and docking with a distressed submarine, even at an angle of 45 degrees. During one dive, the unit is capable of saving up to 22 people. 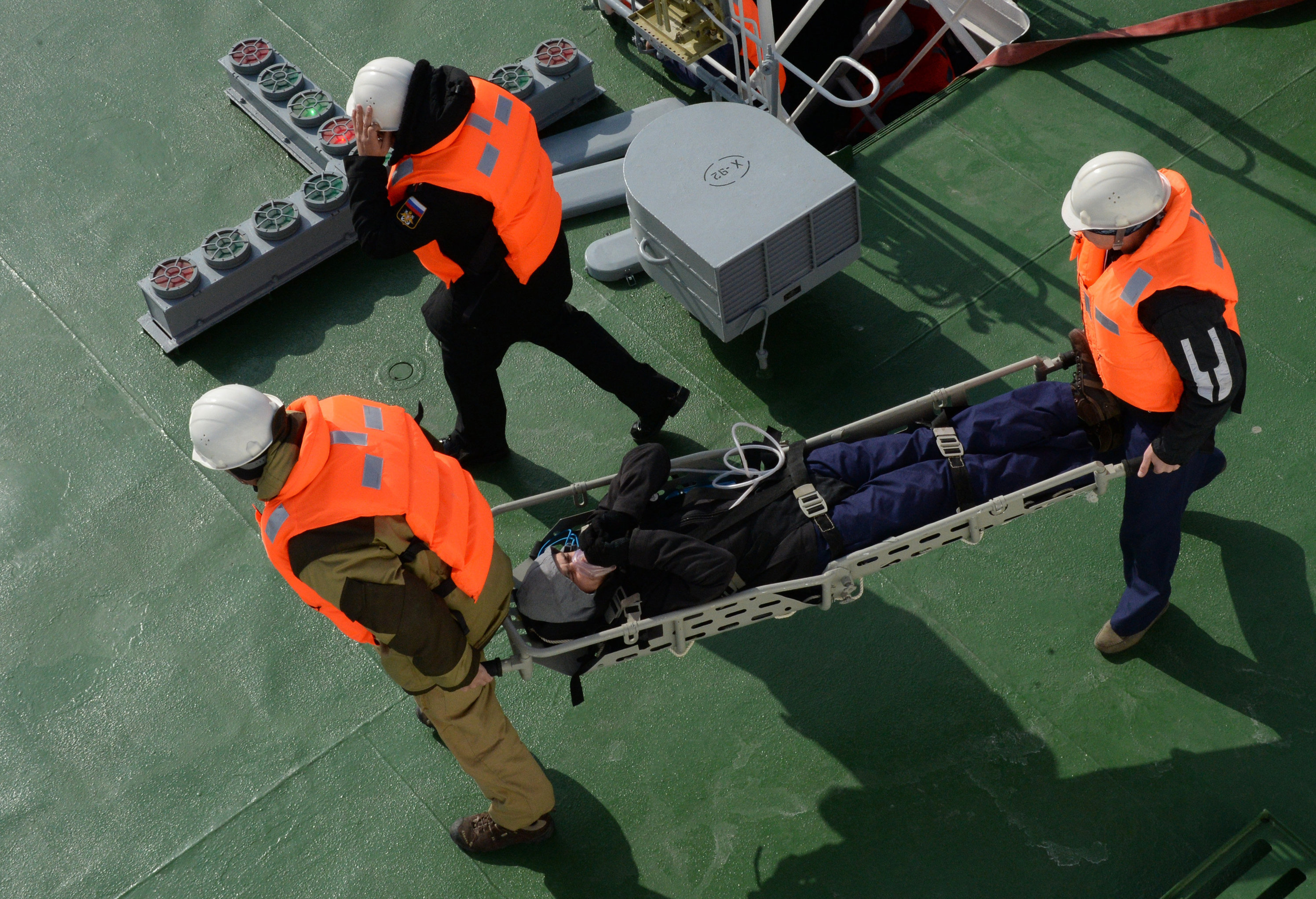 © Sputnik / Vitaliy Ankov
Transporting a submariner from the board of the Igor Belousov vessel during a submarine crew rescue drill by the sea rescue service of the Pacific Fleet in the Peter the Great Gulf
"This apparatus was designed by the Lazurit design bureau in Nizhniy Novgorod; Dolphin only releases it into the water and lifts it back up. The device is immersed, carries out a search for the stricken submarine, docks, and literally pulls itself to the rescue compartment. By unfolding the hatches, the Bester crew help the submariners climb into it."

"Then, the device floats to the surface. Incidentally, Dolphin also has all the necessary equipment to provide medical care, including surgery," Forst said. 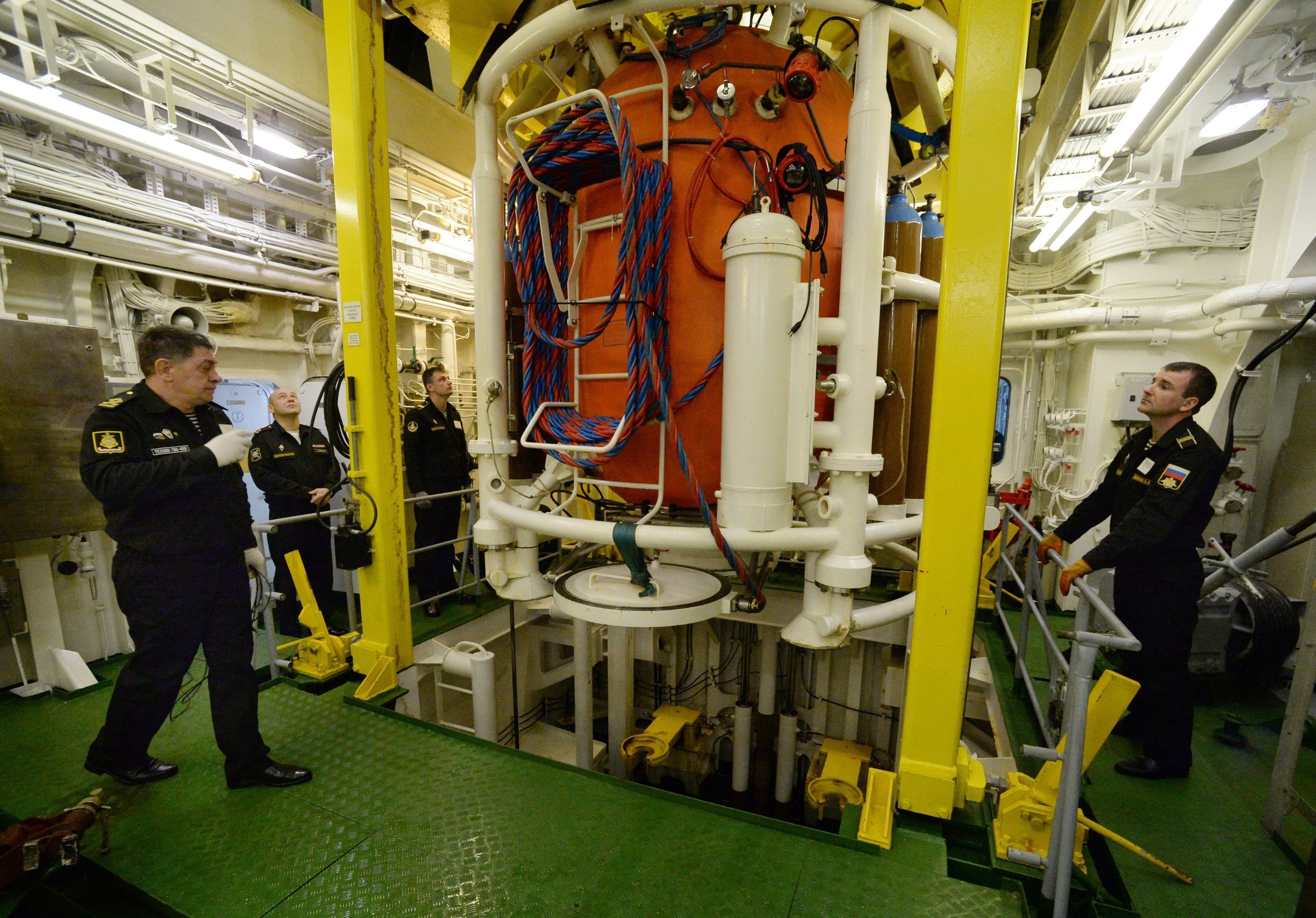 © Sputnik / Vitaliy Ankov
Lowering a diving bell at the Igor Belousov search and rescue vessel during a submarine crew rescue drill by the sea rescue service of the Pacific Fleet in the Peter the Great Gulf
A helipad, fire-fighting equipment, remote-control operated diving vehicle, special suits for divers and rescuers and the latest diving bell can all be provided on board the 21300C, too.

The Russian navy's Igor Belousov arrived in the port of Vladivostok on September 4. On the way, the ship called at ports in Europe, North Africa and Asia, including India and Vietnam, where its capabilities earned the admiration of the local navy.

© Sputnik / Georgiy Zimarev
Watch Out, NATO: New Russian Warship Gun Second to None
As part of the Russian Navy's Pacific Fleet, the ship has already taken part in navy drills which demonstrated its superiority over foreign search and rescue ships, Forst said.

"The results of the exercise confirmed the complete compliance of the ship' design characteristics with the requirements for the vessel. A training dive with the Bester apparatus was carried out, which brought some "injured" sailors to the surface, transferred them to a decompression station and imitated decompression. It was proven that according to a range of criteria, Dolphin is superior to all foreign analogues," Forst concluded.