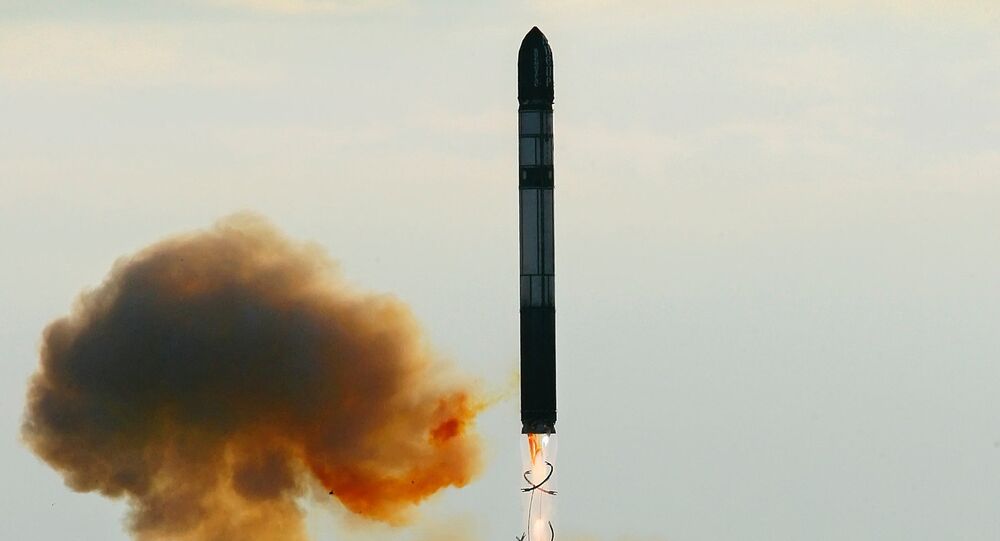 The Sarmat, undergoing development at the Makeyev Rocket Design Bureau in the city of Miass, just east of the Ural Mountains, is Russia's answer to the threat of missile defense systems designed to undermine the global strategic balance.

On Sunday, Makeyev released an illustration of how the new secretive weapon, expected to go into production as soon as 2018, actually looks.

© Photo : makeyev.ru
Screenshot of the Makeyev Rocket Design Bureau website, showing an illustration of what appears to be the RS-28 Sarmat

The image is accompanied by a short text: "In accordance with the Decree of the Russian Government 'On the State Defense Order for 2010 and the planning period 2012-2013', the Makeyev Rocket Design Bureau was instructed to start design and development work on the Sarmat. In June 2011, the Russian Ministry of Defense signed a state contract for the Sarmat's development. The prospective strategic missile system is being developed in order to create an assured and effective nuclear deterrent for Russia's strategic forces."

The text is signed by chief designers V. Degtar and Y. Kaverin.

© Sputnik / Sergey Mamontov
Russia's 'US Missile Defense-Killing' Hypersonic Rockets Arriving Sooner Than You Imagine
The Sarmat is set to replace the RS-36, a family of ICBMs and space launch vehicles that entered service in the 1970s and 1980s. Featuring a large payload capacity, the multi warhead missile is expected to carry up to 10 heavy warheads, or 16 lighter ones, or a combination of warheads and countermeasures to overwhelm enemy missile defenses.

In anticipation of the new missile's appearance, what many foreign defense specialists have found most disconcerting is the prospect of the RS-28 being armed with Project 4202, a Russian hypersonic glider warhead carrier which, after separating from its ICBM launch vehicle, would be able to accelerate to speeds between Mach 7 and Mach 12, acting like a hypersonic cruise missile. The glider, expected to come online between 2020 and 2025, would be capable of maneuvering to overcome any existing or prospective missile defenses to reach its target.

The Sarmat is expected to serve as an effective response to US missile defense deployments near Russia's borders, as well as projects such as Prompt Global Strike, a Pentagon initiative meant to overcome a prospective enemy's strategic deterrent using the massed launch of conventional cruise missiles.