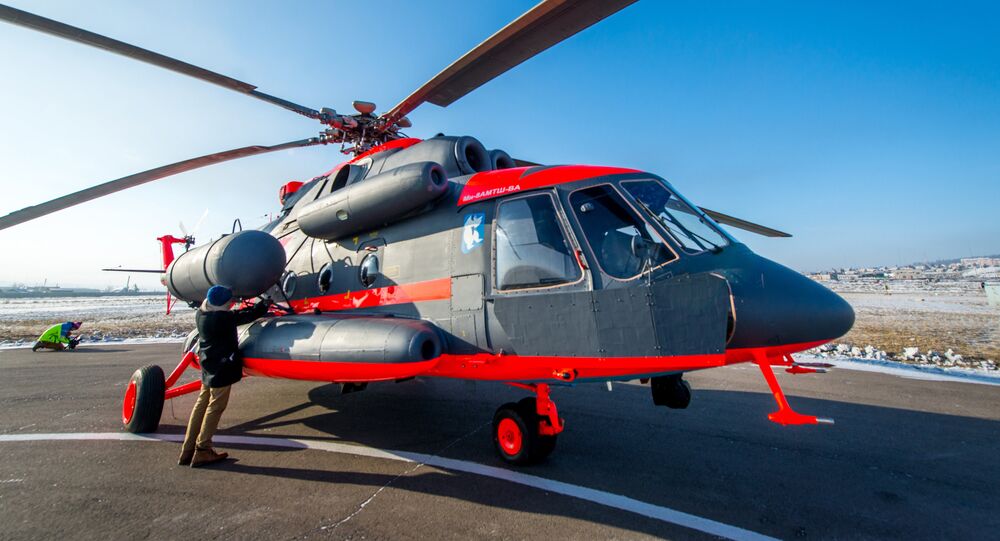 The Mi-8AMTSh-VA Arctic military transport helicopters might be of interest to companies whose activities are related to the Arctic and northern latitudes, particularly, oil and gas, exploration and transport companies, according to the statement of Russian Helicopters holding.

Mi-8AMTSh-VA is an adapted version of the Mi-8AMTSh helicopter in order to operate in sub-zero conditions. Among its main features is the presence of a unique oil and transmission units heating system, which allows the engine to start at temperatures as low as —76 Fahrenheit.

"Technical solutions implemented in the Arctic helicopter Mi-8AMTSh-VA can be applied not only to Defense Ministry uses but also for civil projects. These helicopters might be of interest to companies whose activities are related to the Arctic and northern latitudes, particularly, oil and gas, exploration and transport companies," it was noted in the press release.

© Photo : Emergencies Ministry RF
Portugal Uses Russian-Made Helicopters in Tackling Madeira Wildfire Blaze
The Mi-8AMTSh is an armored assault version of the Mi-8 helicopter. It features new Klimov VK-2500-03 turboshaft engines, a more powerful TA-14 auxiliary power plant and upgraded avionics. It can handle high-altitude navigation, as well as being capable of performing day and night flights in adverse weather conditions. The main role of this version is to carry cargo and troops and support them with firepower if necessary. The Mi-8AMTSh can also perform evacuation and combat search and rescue missions.

Russian Helicopters is a leading player in the global helicopter industry and one of the few companies worldwide with the capability of designing, manufacturing, servicing and testing modern civilian and military helicopters, according to the company's website.

The second international military and technical forum Army-2016, organized by the Russian Defense Ministry, kicked off on Tuesday in Kubinka, a western suburb of Moscow, bringing together over 1,000 representatives from the Russian defense industry, research institutes, universities, as well as 80 foreign delegations.

Russian Helicopters in Talks to Deliver 60 Ka-226T, Ansat to Iran