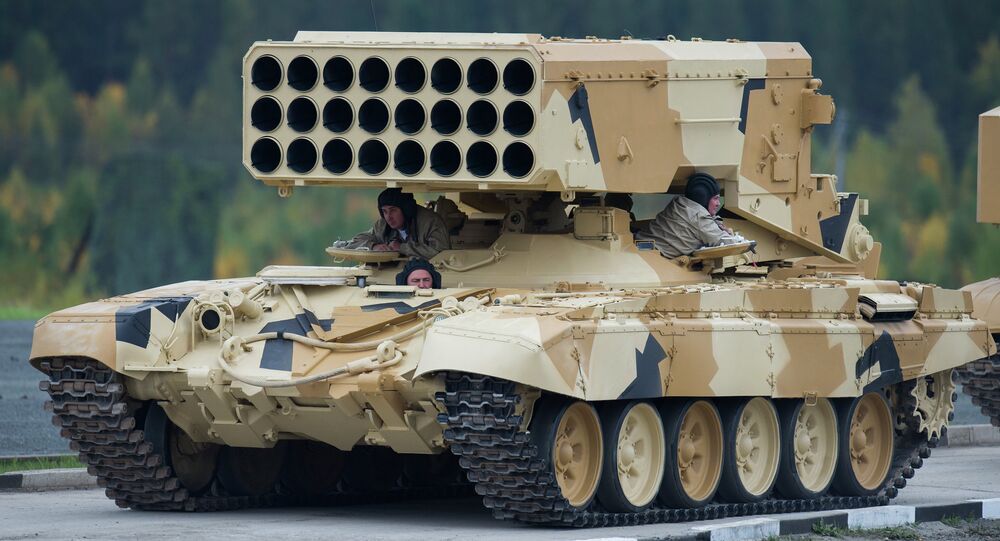 The most powerful non-nuclear weapon in Russia's arsenal, the TOS-1 multiple rocket launcher, has no equals in the world, defense analyst Sebastien Roblin wrote for the National Interest.

"The TOS-1 vehicle has no real counterpart in use by Western militaries," he noted. While there are all kinds of multiple-rocket launch systems in use, such as the M142 HIMARS in use by the US Army to bombard [Daesh] in Iraq, they are all lightly armored weapons intended for long-range indirect fire."

The TOS stands for the heavy flamethrower system which is available in two versions, known as TOS-1 nicknamed Buratino and TOS-1A Solntsepyok (Scorching Sun).

Roblin described the launcher as one of "the most devastating explosive weapons short of tactical nuclear weapons."

This is how this system works:

"A fuel-air explosive detonates the very air itself: a small explosive inside the FAE munition spreads a chemical cloud in the air through an aerosol effect. The gaseous cloud seeps effortlessly into buildings and caves and down into slit trenches. A secondary explosive then ignites the cloud, causing a massive and long-lasting explosion," the analyst said.

Russia has utilized the system since the late 1990s, with TOS-1's baptism of fire taking place in Afghanistan during the Soviet–Afghan War.
The TOS-1A was first used in combat in Iraq in 2014 during Operation Ashura which was meant to free the Daesh-held town of Jurf al-Sakhar. Baghdad has four such systems.

"The TOS-1As were also given to the Syrian Arab Army, which deployed them against various Syrian rebels. Most of the footage released appears to depict the bombardment of rural areas such as the mountains around Latakia, rather than inner-city locations," the analyst detailed.