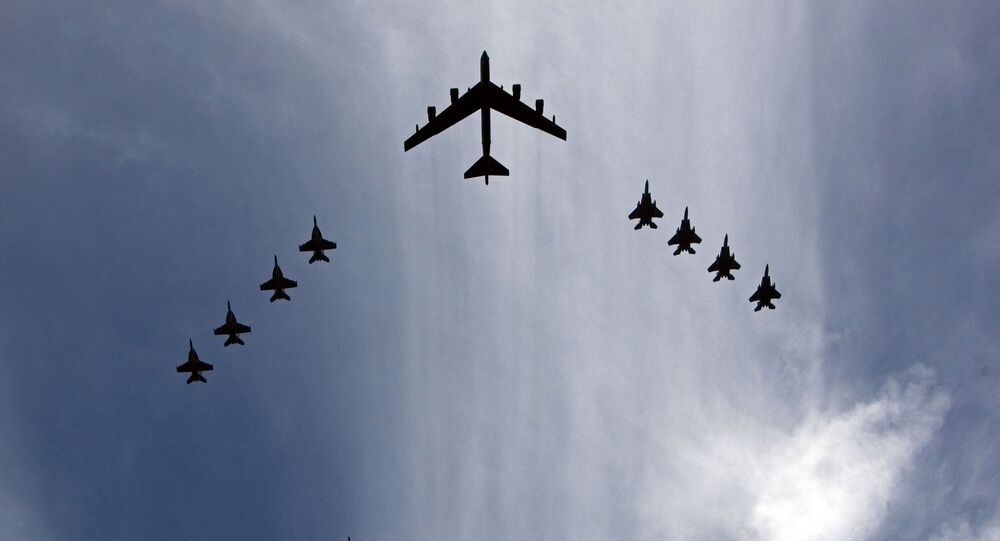 Citing the Russian fighter jet maneuvers that warded off US ships and aircraft near Russia's border in the Baltic Sea earlier this month, lawmakers from the US House Armed Services Committee said that there will be plenty of money devoted to "to deter Russia" in the finalized 2017 defense budget, The Hill reports.

Lawmakers, the political newspaper writes, are fired up about supporting President Barack Obama's military budget proposal, particularly the section devoted to quadrupling US military expenditures in Europe. The spending would allow the Pentagon to station more troops and weapons in Central and Eastern Europe.

"We do have money to station troops in various parts of Eastern Europe, and that's the main thing, to have a presence in the region and to show support for our allies," Democratic Congressman Adam Smith, the ranking member of the committee, told The Hill.

© REUTERS / US Navy/Handout via Reuters
Potential NATO Commander Threatens Russian Jets That Buzz US Warships
The House Armed Services Committee's marathon markup session to prepare the 2017 defense budget is set to start Wednesday. It has been preceded by a rare show of bipartisan unity among lawmakers, with both Republicans and Democrats saying that they are committed to "stronger deterrence measures" against Russia. Officials from both sides have blamed Russia for the Ukrainian crisis which started in 2014, when that country's legitimate government was overthrown in a EU and US-financed coup.

The events in the Baltic Sea involving the USS Donald Cook, where a pair of Russian jets were reported to have repeatedly buzzed the US ship, and a separate incident later involving a Su-27 multirole fighter performing a barrel-roll maneuver over a US spy plane flying in the same region, appear to have given lawmakers the extra motivation they needed, "put[ting] the spotlight back on Russia."

"At the top of lawmakers' measures against Russia in the National Defense Authorization Act is the European Reassurance Initiative, which is designed to provide aid to the militaries of European allies worried about Moscow's moves," The Hill said. "The bill would authorize $3.4 billion for the initiative, the same amount the administration requested, and quadruple what the initiative got this year."

© AP Photo / Ted S. Warren
US Military to Conduct Large-Scale Drills to Counter 'Strategic Threats'
"The bill also supports the National Commission on the Future of the Army's recommendation to permanently station an armored brigade combat team in Europe, staffers said this week. The Army already plans to send one brigade, but on a continuous rotation. A permanently stationed brigade, supporters say, would be a stronger deterrence."

Earlier, NATO had committed itself not to station significant forces in Eastern Europe, ostensibly to try to stay within the spirit of the 1997 NATO-Russia Treaty, which promised Moscow no new bases near Russia's borders.

"The bill," The Hill notes, "would also authorize $150 million for the Ukraine Security Assistance Initiative, which would help train and equip that country's military."

Finally, in addition to funds directed explicitly against Russia, committee members are also pushing to simplify the Pentagon's purchasing process, and "touting the additional aircraft, ships and other equipment the bill would authorize spending on as necessary to deter Russia."

© AP Photo / Alik Keplicz
NATO Must Stop Expansion in E Europe if Seeks Dialogue With Moscow – Envoy
Randy Forbes, the chairman of the Seapower and Projection Forces subcommittee, said that his subcommittee's portion of the bill, which would boost outlays for shipbuilding to their highest levels since the 1980s, would also help to 'deter aggression'.

The spending, the Republican congressman told the newspaper, would allow the Navy to increase its 272 ship fleet to 350, and "is going to be vitally important to have the kind of presence we need so that we can start actually deterring some of this kind of aggression from happening."

Russia, for its part, has maintained that the 'aggression' may actually be coming from the side that's sending its troops, ships and aircraft thousands of miles across the oceans to Russia's borders, not the other way around.

Obama to Announce Deployment of Additional Troops to Syria

US Military to Conduct Large-Scale Drills to Counter 'Strategic Threats'

It’s Not About Money: Pentagon Needs Reforming, Not More Dollars