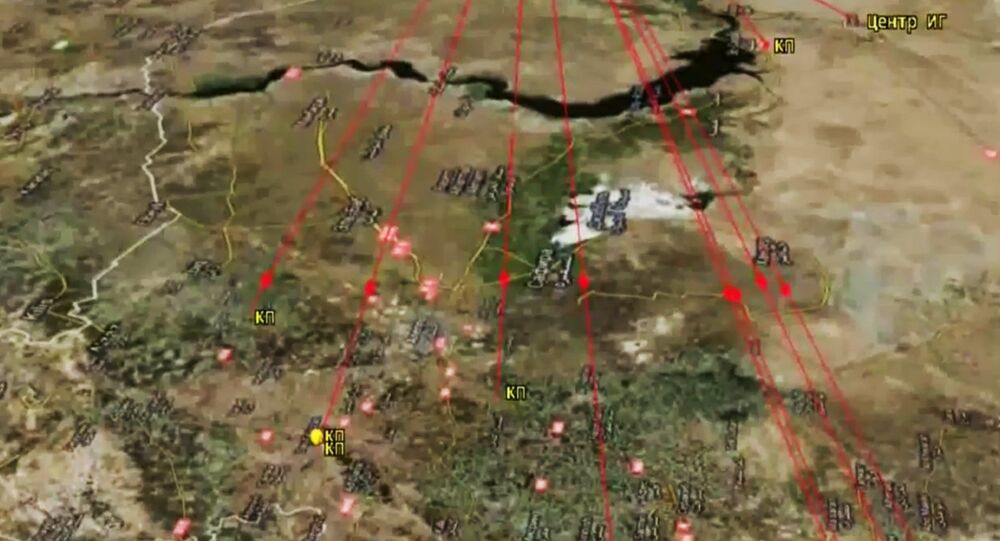 With the world focused on the Russian military's surgical strikes against terrorist targets in Syria, officials and media must be asking themselves how it is exactly that Russia collects the intelligence it needs to pick its targets; the US-based international affairs magazine The National Interest suggests that it may have found the answers.

With the Russian Air Force's campaign against ISIL militants in Syria entering its second week, reinforced Wednesday by naval-based cruise missile strikes on militant targets from the Caspian Sea Fleet, military officials are always sure to emphasize that their targets are chosen based on an extensive process of intelligence gathering, including air surveillance and reconnaissance info, meticulously sorted and verified by both the Russian and Syrian militaries.

But where, from the Russian side at least, is that intel coming from? Russian journalists on the ground in Latakia recently shed light on at least a part of the process, reporting that at least some of the intel is gathered using drones, which scout ISIL positions and hardware prior to aircraft taking off. However, there has to be more to it than that.

According to TNI, "while Moscow has not identified its [mobile] reconnaissance platforms, pictures of [a] Russian Il-20M Coot flying over the battlefield have popped up on social media."

"Based on the Ilyushin Il-18 turboprop airliner, these four-engined planes are rough equivalents to the US Air Force's family of RC-135 aerial spies," TNI explains.

TNI cites journalist and military aviation blogger David Cenciotti, who reported on the plane and its capabilities last month, citing a source which suggested that at least one Il-20M had "already arrived in Syria to reinforce the Russian contingent."

"The Il-20 is an ELINT (Electronic Intelligence) platform," Cenciotti explained. "It is equipped with a wide array of antennas, AR (Infrared) and Optical sensors, a SLAR (Side-Looking Airborne Radar) and satellite communications equipment for real-time data sharing. The aircraft," according to the expert, "is the Russian Air Force's premiere spyplane."

According to Cenciotti, the Coot will be used to "perform intelligence gathering missions, eavesdropping into IS militants communications, detecting their systems' emissions to build an Electronic Order of Battle of ISIS in the region, and pinpointing their positions."

"But flying spooks aren't the only spy gear Russia is sending to the region," The National Interest noted.

On Monday, Russian media reported that the Baltic Fleet reconnaissance ship Vasily Tatishchev, a Vishnya-class ship designed for signal intelligence and communications intelligence-gathering via a bristling array of onboard sensors, is sailing to the conflict zone. The ship transmits its data to shore via satellite uplink antennas located on its two large radomes, and was reported to have already passed through Denmark's Baltic Sea strait over the weekend.

With officials telling Russian media that the ship will be involved in "monitoring the situation on the airwaves both in Syria and all neighboring countries, including their territorial waters," TNI emphasized that the ship's "appearance in the area seems anything but routine…With Moscow highlighting the use of signals intelligence, it's unlikely the 3,400-ton" ship will be "there to simply monitor the situation."

© Sputnik / Dmitriy Vinogradov
Russia Reportedly Uses Infrared-Guided Smart Bombs Against ISIL in Syria
The magazine noted that Russia already has "a long history of supporting the Syrian government with signals snooping," recollecting a video uploaded by Syrian rebels last year purporting to show the capture of an evacuated "shared Russian-Syrian intelligence facility identified as Center S" at Al-Harra, in the country's southwest. The facility was reported to have been jointly operated by Russian GRU and Syrian intelligence services.

With the suspected ground-based intel facility at Al-Harra presently believed to remain under the control of rebel forces, TNI suggests that the deployment of the Il-20 Coots and the Vasiliy Tatischev mobile spy platforms "will perhaps make up for the loss of land-based outposts."

"Whatever the case," the magazine notes, "Moscow's electronic spies will no doubt be busy for the foreseeable future."