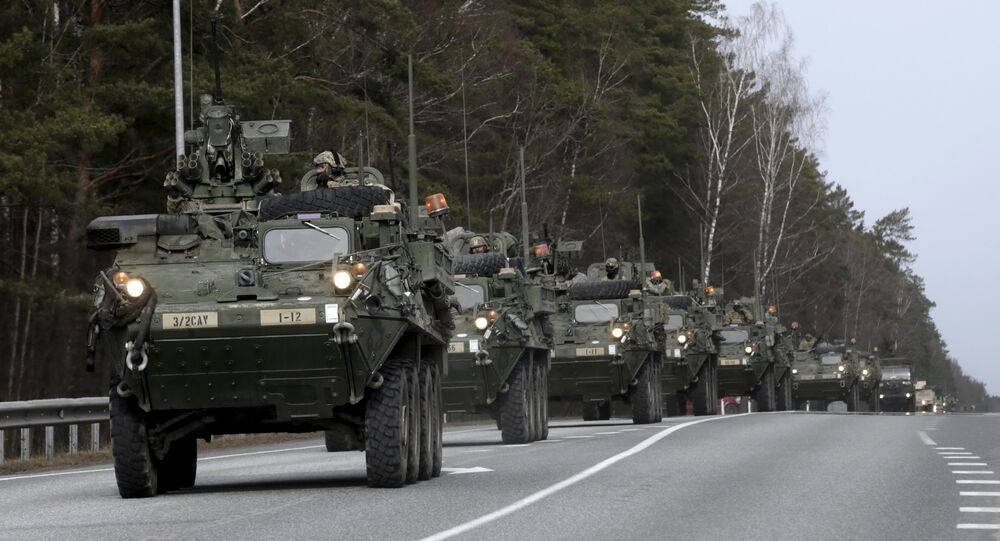 Commenting on the Polish Defense Ministry's recent statements that it is holding talks with the US on the stationing of military warehouses in Poland, Vice Admiral and politician Marek Toczek told Sputnik that such a move would not increase Polish national security, and would result only in a further escalation of tensions between NATO and Russia.

© AP Photo / Marek Lis
Warsaw in Talks on Stationing US Military Warehouses in Poland
On Sunday, Polish media reported that Warsaw was in talks with the US Defense Department about setting up military supply depots for US equipment and heavy weapons on Polish territory and elsewhere in Eastern Europe. Defense Minister Tomasz Siemoniak had noted that "it's been our longtime wish to have maximum US military presence in Poland and NATO's entire eastern flank as a whole."

Commenting on the possibility of an arms buildup in the region, Toczek told Sputnik that "this is another step toward the sharpening of tensions, which could lead to a great tragedy. In no way does this step serve in normalizing relations." The Polish navy veteran turned-politician added that in his view, the move "will not increase Poland's national security."

"I do not see any concrete actions on the part of Russia or other countries located to the east of Poland which would justify such a step. In my view, this type of action creates the basis for an escalation, via similar actions [by the other side]. I believe that this step would be contrary to the interests of Poland and of other countries in the region."

Referring to NATO Secretary General Jens Stoltenberg's statement earlier this month that Russia poses no immediate threat to NATO, Toczek noted that he does "not know why the statements by politicians contradict one another," emphasizing only that such a decision would "not contribute to a constructive resolution of the problems which exist in Ukraine.  If we focus on the imaginary threat from Russia in relation to Poland and other countries in the region, we can expect to see an increase in tensions, and this is not something in the interests of the Poles."

© Sputnik / Alexei Danichev
US Deploys Heavy Weaponry in Europe; Russia to 'Answer Adequately'
Toczek noted that he expects a measured response from the Russian Foreign Ministry or the president, stating that "there will be statements and, possibly, actions aimed at cooling any overly heated declarations." The veteran Polish Navy commander emphasized that over the last period, "Russian diplomacy has showed its professionalism…At the same time that the West has shown its irresponsibility, which is dangerous in and of itself, Russian [foreign policy] is being conducted from the standpoint of reason and will allow, hopefully, for a reduction in tensions, which do not benefit anyone. I think it would be difficult to speak of something else, because Russia is a serious state, having at its disposal certain military capabilities."

Toczek noted that making policy "based on emotions is an irresponsible thing to do." He noted that he remains "confident that Russia will continue the political line we have seen in recent years, and that it will not allow itself to be drawn into hazardous games."