Ninety percent of all declared chemical weapons in the world have been verified as destroyed by the Organization for the Prohibition of Chemical Weapons (OPCW), the OPCW said in a statement Thursday.

UNITED NATIONS (Sputnik) — The OPCW added that the process to complete the elimination of Cold War-era stockpiles in Russia and the United States is well underway and is scheduled to be completed before the end of 2020 and 2023, respectively.

“OPCW Director-General, Ambassador Ahmet Uzumcu, today announced that 90 percent of declared chemical weapons had been verified by the OPCW as destroyed. This includes stocks of unitary weapons, such as sulfur mustard, and primary precursor chemicals for producing deadly nerve agents, like sarin." 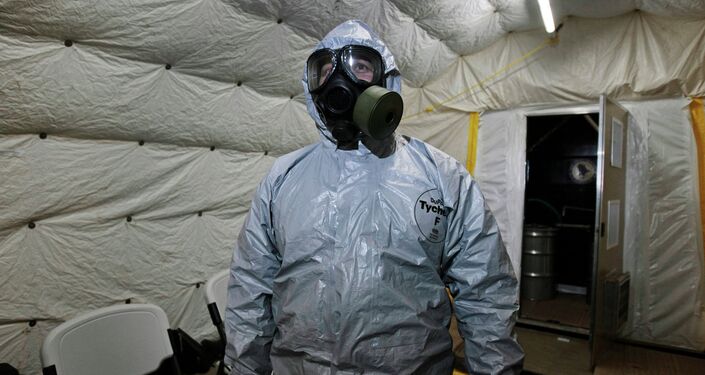 © AP Photo / Alfonso Perez
The Executive Council of the Organization for the Prohibition of Chemical Weapons (OPCW) has condemned any use of chemical weapons, referring specifically to the OPCW Fact-Finding Mission findings

According to the statement, the Convention on the Prohibition of the Development, Production, Stockpiling and Use of Chemical Weapons and on their Destruction (CWC), administrated by the OPCW, comprises 190 member-states, with six states – Angola, Egypt, Israel, Myanmar, North Korea and South Sudan – still outside the CWC.

Angola and Myanmar’s parliaments recently approved joining the Convention, and both countries are expected to become the CWC state-partners in the near future, the OPCW statement added.

In April, OPCW Director General Ahmet Uzumcu said that all declared chemical weapons in the world are expected to be destroyed within a period of eight years.

All Declared Chemical Weapons to be Destroyed Within 8 Years - OPCW

OPCW to Observe Syrian Province Amid Reports of Chemical Warfare Use