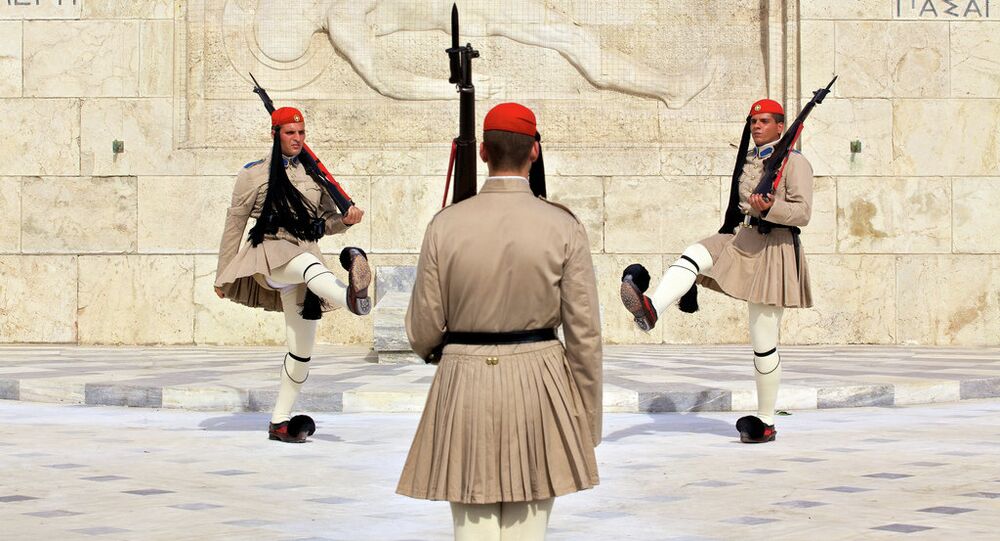 In an interview for Russia's RIA Novosti, Greek defense analyst Ilias Iliopoulos noted that in the interests of closer military-technical cooperation with Russia, Greece could allow the country to use of its military bases, and that this possibility may well be discussed during the Greek Defense Minister's visit to Moscow later this week.

© Flickr / Chris Hutchison
Could Greece Be Key to Restoring Ties Between EU, Russia?
Greek Defense Minister Panos Kammenos is set to arrive in Moscow for a two day visit starting Wednesday. The visit will include a meeting with Russian Defense Minister Sergei Shoigu. Russian experts believe that Kammenos's meeting with his Russian counterpart might include the provision of spare parts for Russian weapons systems, including the S-300 air defense system, Kornet anti-tank missiles, and Zubr-class hovercraft. Last December, the Greek Defense Ministry signed contracts with Russia on the purchase of spare parts for the Top-M1 and Osa-AKM mobile air defense systems.

Iliopoulos, a lecturer at Hellenic National Defence College, welcomes Kammenos's visit, noting that in a time of growing tensions between Russia and the West, "contacts, visits, and communication between members of the European Union and NATO with Russia can help to reduce tensions."

The analyst recalls that the event, which "has great political and symbolic significance," comes on the heels of Prime Minister Alexis Tsipras' "historic" visit to Moscow last week.

"The Tsipras visit held a great political importance. As for defense matters and Kammenos's visit, I believe that Greece must do everything it can to move closer to Russia on issues of defense, defense policy, technology, cooperation and defense diplomacy. Greece, as you know, is the only NATO country to which several advanced Russian defense systems were exported several years ago. The country's air defense is very largely based on Russian systems."

Iliopoulos believes that Kammenos may attempt to reach an agreement with Russia on the technical maintenance and modernization of the Russian weapons systems Greece possesses. The analyst notes that "this must be done urgently. These systems presently have serious issues, and not because of [any error from] the Russian side, but because the previous government simply used them and, under Western pressure, underestimated the importance of maintenance and modernization."

© AP Photo
Eurozone Countries See No Progress in Reform Talks With Greece
The defense expert also believes that while Greece's options are presently limited by the economic crisis, the country should do everything it can to avoid "closing this window [on defense cooperation with Russia] for good. On the contrary, the Greek side must bear in mind that Russian defense systems are Greece's best and most reliable option. And not only technically, but politically as well."

Regarding Russia's possible use of Greek military bases, Iliopoulos is optimistic.  "And why not? 25 years have passed since the fall of communism. We must discuss seriously, rationally, and realistically the issue of Greece providing Russia with an opportunity to use Greek ground, sea and air bases, on the Aegean Sea and in the Dodecanese Islands, as well as the Ionian Sea and Corfu, the seven islands liberated by Admiral Fyodor Ushakov [during the Second World War]."

© Flickr / Sky Slicer
The Trojan Horse
The expert notes that such an agreement would not break any of Greece's agreements with NATO, or any other international treaties. "No international statute prohibits the cooperation of two countries."  In fact, Iliopoulos notes, Russian-Greek defense cooperation would assist in the maintenance of global stability, including the fight against terrorism and Islamic extremism in Syria and elsewhere in the Middle East. "I do not think that anyone in the West would have a problem with this," the expert notes.

Ilias Iliopoulos is a lecturer at Hellenic National Defence College, the country's highest defense educational institution, and a former analyst at the Greek Ministry of Defense. He is also the former Chair of the Political and Strategic Studies Department at the Baltic Defense College in Tartu, Estonia.

Eurozone Countries See No Progress in Reform Talks With Greece