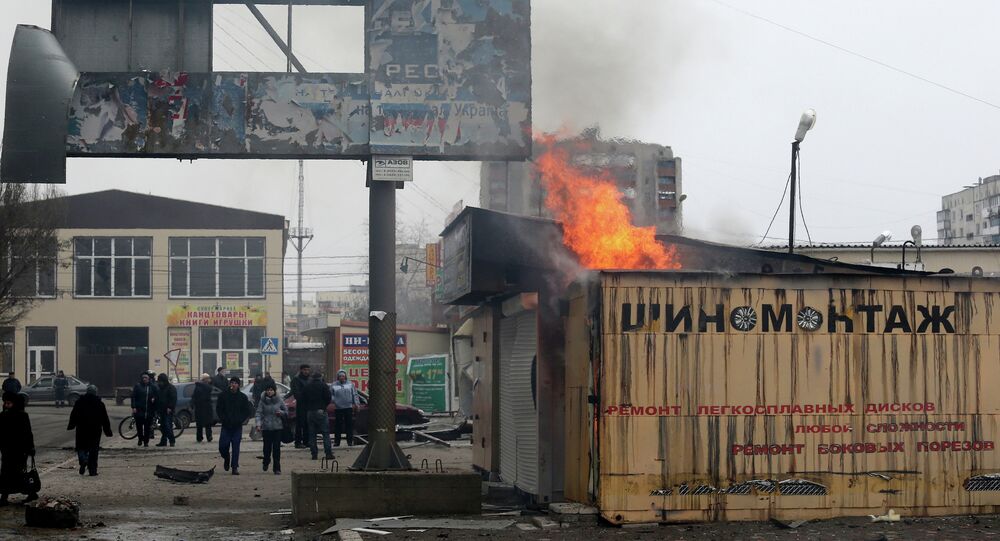 Russia's Permanent Representative to the United Nations Vitaly Churkin told the UN Security Council that Russia called for an objective investigation of Mariupol and Donetsk, and before that of Maidan and Odessa.

© AFP 2021 / ANATOLII BOIKO
Putin Blames Kiev for New Violence in East Ukraine
UNITED NATIONS, January 27 (Sputnik) – Russia is calling for an objective investigation into recent shelling in southeastern Ukraine, particularly of the cities of Mariupol and Donetsk, Russia's Permanent Representative to the United Nations has told the UN Security Council.

"We call for [an] objective investigation of Mariupol and Donetsk, and before that of Maidan and Odessa," Vitaly Churkin told the Security Council Monday, during an emergency meeting on Ukraine.

According to Churkin, beyond the January 24 rocket attack on Mariupol that killed at least 30 people and left over 90 injured many "cities in Southeast Ukraine are subjected for many days now to indiscriminate shelling from heavy weapons as a result of which there [are] hundreds of casualties".

© AFP 2021 / SERGEI SUPINSKY
Kiev Requests Additional Military Aid From NATO in East Ukraine Standoff
The Russian envoy told the Security Council that last week in Donetsk "at the very least 27 civilians died, 71 people have been injured, 105 residential houses have been destroyed". Hospitals and kindergartens have been hit by rockets as well.

Churkin stressed that Russia will continue to urge the two sides of the Ukrainian conflict (Kiev and the self-proclaimed people's republics of Donetsk and Luhansk, or DPR and LPR) to start a direct dialogue.

On Saturday, the Russian Mission to the United Nations said that the Security Council had failed to agree on a press statement, following the attack on Mariupol, because the United Kingdom "insisted on condemnation of some of the self-defense forces' statements".

© REUTERS / Nikolai Ryabchenko
Mariupol Mayor Declares January 26, 27 Additional Days of Mourning for Attack Victims
According to Churkin, representatives of the United States and Lithuania had "insisted" that a "condemnation of one event taken out of context, the statement by the leader of the self-proclaimed Donetsk People's Republic" be included in the Security Council statement.

Mariupol, located just outside the main conflict zone in the Donetsk region, was shelled on Saturday. DPR head Alexander Zakharchenko said that Kiev had gathered its forces near Mariupol, with militia's positions, having being constantly attacked with Grad missiles and artillery.

Kiev forces have recently intensified shelling in the southeastern region of Donetsk, having officially acknowledged that a major security operation was being carried out at the Donetsk airport.

On Monday, Russian President Vladimir Putin stressed that the deteriorating situation in southeastern Ukraine is caused by Kiev's desire to forcibly suppress the people living in the region.

Kiev started military action in southeastern Ukraine in mid-April, 2014, in response to local residents' refusal to recognize the new government, which came to power as a result of a coup in February.