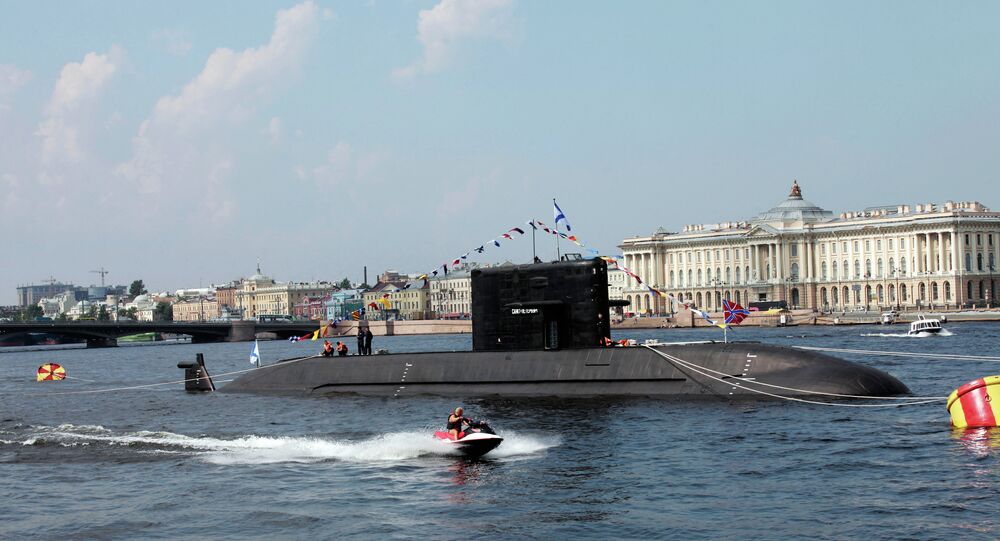 Anaerobic or air-independent submarines, which usually use hydrogen-oxygen fuel cells, are quieter than conventional diesel-electric boats and do not have to surface or use snorkel tubes to breathe air, thereby exposing themselves to detection by radar and other sensors.

"The Russian side is ready to supply a foreign client with a submarine refitted to meet any requests for a different exterior and equipment as formulated by the client," the source told RIA Novosti.

In 2007, New Delhi said it was considering expanding its fleet of submarines with diesel-electric subs. One of the key requirements was for the boats to have so-called anaerobic engines.

Air-independent (closed cycle) submarines, which usually use hydrogen-oxygen fuel cells, are quieter than conventional diesel-electric boats and do not have to surface or use snorkel tubes to breathe air, thereby exposing themselves to detection by radar and other sensors.

© Sputnik / Kirill Braga
Russia Proposes India to Increase Scale of Joint Military Drills
A Russian design bureau, Rubin, is currently running tests on AIP systems to be installed on the Russian Navy's Lada-class diesel-electric submarines (Project 677) in 2015, with a new class of non-nuclear submarines with AIP engines to enter the construction phase in two years.

This comes as Russian Defense Minister Sergei Shoigu arrived in New Delhi earlier in the day to talk over the countries' joint military-technical ventures with his counterpart, Manohar Parrikar. The ministers have agreed to "fast-track" a host of joint projects, including work on a fifth-generation fighter jet they are building together.

India is Russia's largest military-technical cooperation partner. According to estimates by Russia's Federal Service for Military-Technical Cooperation, the country supplied India with $4.78 billion worth of weapons and military equipment in 2013. India also leases Russian hardware, such as the nuclear-powered Akula-class Chakra submarine.