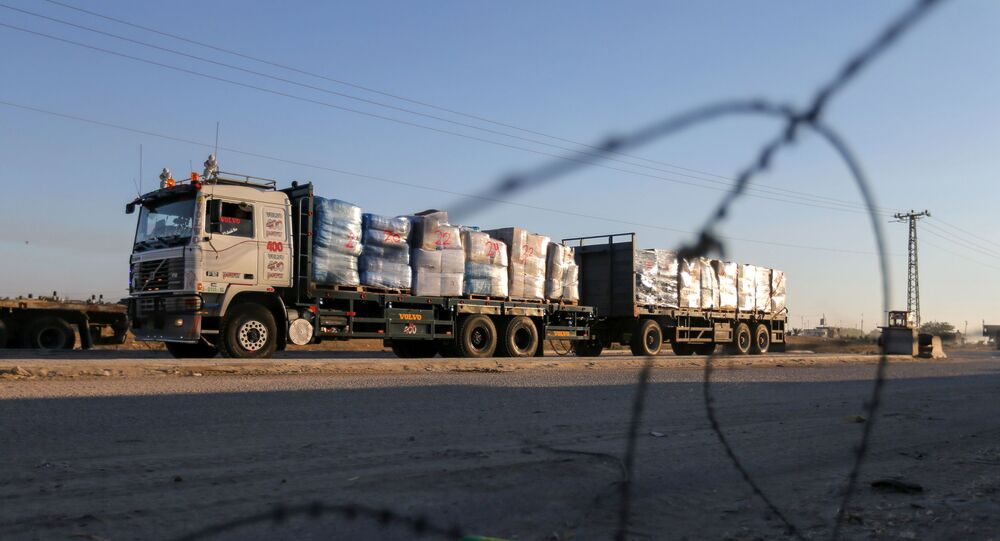 Before the eruption of the hostilities between Israel and Gaza-based militant groups on 10 May, the Kerem Shalom crossing was open for the transit of goods. Back then, 700 trucks had been departing the Strip every day. Now, however, their number is barely 300, a month after tensions subdued.

On Monday, when Israel announced it would open the Kerem Shalom crossing that links the Gaza Strip to Israel, Nayef al-Omour, a 40-year-old truck driver from Rafah, located in the south of the Gaza Strip, breathed a sigh of relief.

For him, the opening of the crossing and the decision to let clothes and agricultural products in meant he was back to work again.

"I was happy to hear about the news. It meant that I could earn a living after 21 days of closure."

Israeli authorities closed down Gaza's only link to Israel used for the transportation of goods on 10 May, after the enclave's military groups opened fire on the Jewish state, launching a barrage of rockets.

In addition, during the 11 days of fighting that resulted in 13 Israeli deaths and cost the lives of more than 250 Palestinians, Israel introduced a number of restrictions on the Gaza Strip. These included a ban on fishermen venturing beyond their fishing zone, limitations on the number of patients seeking treatment outside of the enclave and the curtailment of raw materials that could enter or leave the area.

© AP Photo / Nariman El-Mofty
Egyptian FM Urges Israel to Refrain From Actions That Could Lead to Escalation in Gaza
Those are still in place despite the fact that the fighting ended more than a month ago. Imports of agricultural products and textiles are permitted but their volume is half of what it was before the eruption of the fighting, when the number of trucks leaving Gaza stood at 700 per day.

Nevertheless, al-Omour says he is "lucky" to be one of those who are back into the work cycle, despite its relatively low scope.

Working as a truck driver earns al-Omour 70 NIS a day, or roughly $21. Sustaining a family of seven with such a low salary is difficult, but in an enclave where more than half of the residents are unemployed and where many others live in severe poverty, beggars cannot be choosers.

Al-Omour still remembers the days when he was unemployed for months, during various rounds of tensions between Israel and Gaza-based militant groups. He has been working in the field of transportation since 2010 and has felt the repercussions of the military operations in 2012 and 2014 on his own skin.

Along with more than a thousand other truck drivers, al-Omour feels that he is being used as a bargaining chip in the hands of the Israeli government, that puts Gazans through an ordeal every time there is a confrontation with Hamas, an Islamic group that's been deemed a terrorist organisation by Israel.

But the truck driver says he doesn't have any other choice but to swallow that bitter pill.

"I have been working in this field for years and I cannot just change my profession. I know this source of income is unreliable. I know it depends on Israel but what can I do? This is my only way to stay afloat."

For now, as the crossing is still open, al-Omour will leave Gaza early in the morning, going through thorough checks by the Israelis who want to make sure the trucks are filled with textile or agricultural produce, not materials or items that can put the security of the Jewish state at risk.

Yet, the truck driver says the Israeli authorities have known him for years, which makes the process of entry to Israel easier. But either way, he is ready for the challenge.