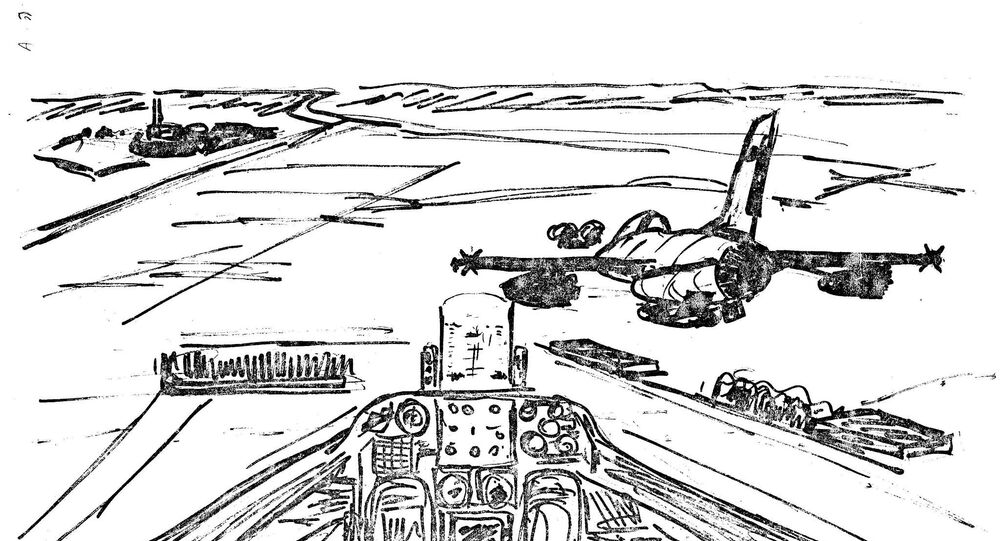 Israel has established a reputation for carrying out daring operations far from its borders, including the 1976 hostage rescue operation at Entebbe Airport in Uganda and Operation Solomon in 1991, which secretly airlifted 14,000 Ethiopian Jews to Israel. However, the most notorious has always been Operation Babylon.

The archive of the Israeli Defense Forces (IDF) published on Tuesday a set of documents related to the 1981 air raid on Iraq’s Osirak nuclear reactor, including several sketches of the site. The attack is variously known as Operation Opera and Operation Babylon.

June 7 was the 40th anniversary of the daring operation in which a group of 14 Israeli fighter jets flew more than 2,000 miles to bomb an unfinished French-Iraqi nuclear reactor being built outside Baghdad. Israeli intelligence had judged that the plant would soon be operational and both the Israelis and the Iranians - with whom Iraq was at war - feared the reactor would be used to produce fuel for a nuclear bomb.

The documents released on Tuesday, some of which were reprinted by the Times of Israel, include detailed sketches of the power plant, as well as the flight path the Israeli Air Force F-16A Falcons would have to take on their approach to strike the facility.

Israeli Ministry of Defense, via Times of Israel
A color schematic of the Osirak nuclear facility in Iraq, from an Israeli intelligence file, released on June 22, 2021

According to the outlet, the release is connected with a digitization project by the IDF Archive. The release also included a video from 2001 featuring Col. Ilan Ramon, the F-16 pilot who led the strike force and later became Israel’s first astronaut. He died in 2003, when the Space Shuttle Columbia broke up during atmospheric reentry, killing all aboard.

The Osirak reactor, bought from France in the 1970s, was being constructed at the Al Tuwaitha Nuclear Center about 11 miles south of the Iraqi capital. Expected to produce 40 megawatts, the light-water reactor was also feared as a potential source of weapons-grade plutonium, even though that type of reactor produces only small amounts of the fissile material.

Iran, which had been invaded by Iraq the year prior, also feared the Osirak reactor and more than a year before the Israeli raid, Iranian aircraft attempted to destroy it. While their raid damaged other facilities and delayed its opening, they failed to destroy the reactor itself.

Israeli Ministry of Defense, via Times of Israel
A sketch of the flight path toward the Osirak nuclear facility in Iraq, from an Israeli intelligence file, released on June 22, 2021

According to the British magazine Air Enthusiast, Iranian and Israeli authorities secretly coordinated this airstrike and two subsequent operations that prepared the ground for the IDF’s June 1981 strike. In November, an Iranian F-4E Phantom II snapped close-up photographs of the Osirak site that were passed to Israeli intelligence. Then, in April 1981, another daring Iranian attack destroyed much of Iraq’s strategic bomber fleet at the H-3 airbase in western Iraq, which could have been used to retaliate against Israel.

The Israeli strike two months later consisted of eight brand-new F-16 Falcons and six F-15 Eagle escorts, which disguised themselves varyingly as Jordanian or Saudi aircraft to sneak to the Iraqi border, where they dropped to just 150 feet above the desert sands to slip in underneath Iraqi radar. As they closed on their target, the jets popped up to several thousand feet and began a high-speed dive, dropping two delayed-fuse bombs each over the reactor’s protective dome, destroying their target. Not a single aircraft was lost in the operation, since the Iraqi air defense crews were caught at dinner, totally unprepared for an attack. Ten Iraqis and one French person were killed by the Israeli bombs.

However, the international reaction to the strikes was almost universally negative, with the United Nations issuing several condemnatory resolutions, and diplomats and the press slamming Israel’s actions as provocative and even terroristic.

While the strike might have set Iraqi President Saddam Hussein’s nuclear power ambitions back by many years, it also sent them underground. During the US’ 1991 war with Iraq, US aircraft repeatedly bombed the Osirak site, destroying everything that remained.