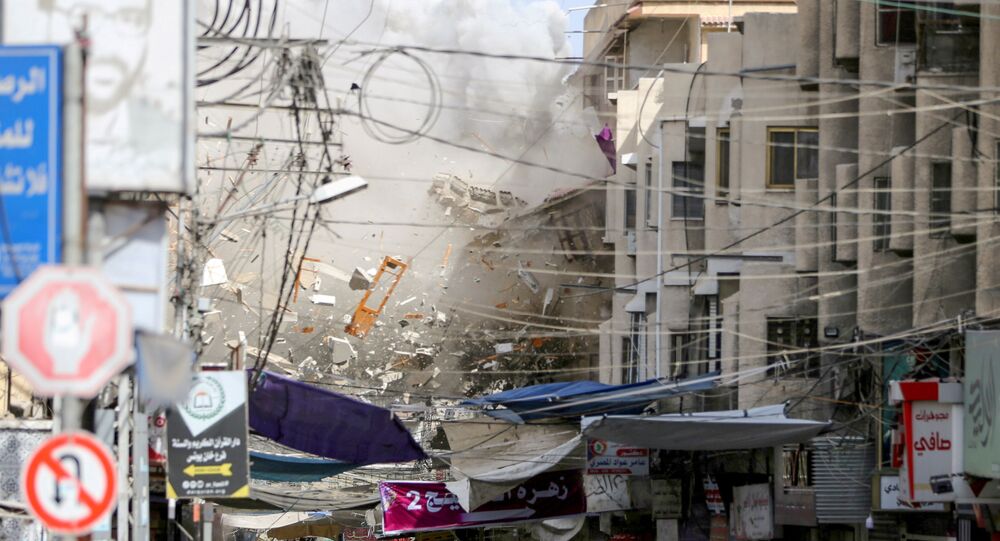 According to estimates, there are several hundred millionaires in the Gaza Strip, an enclave where over half of its two million residents live below the poverty line. But a local businessman says the wealthy in the area always make sure to assist the impoverished population.

One month after the end of Israel's military operation in the Gaza Strip, international efforts to rebuild the devastated enclave continue.

Egypt has already sent equipment and professionals to assist in the reconstruction efforts. It also pledged half a billion dollars to repair what had been damaged during the eleven days of fighting between Israel and Hamas, an Islamic group that controls the Strip.

Similar measures have also been taken by other regional players like Qatar that vowed to invest another half a billion dollars into the coastal enclave, or the United Arab Emirates that sent tonnes of urgent food and medical supplies to Gaza.

Millionaires to the Rescue

But it's not only international efforts keeping Gaza afloat. Within the Palestinian enclave itself there are also those coming to the rescue of the area's economy and its impoverished population.

Jawdat al-Khodary, a 52-year-old Palestinian millionaire from Gaza, says he is doing his best to help his people.

"Every rich person, whether in Gaza or the West Bank, should fulfill their responsibility towards their community and help wherever is possible. I personally try to assist in the most urgent cases, primarily to families, who lost their houses, factories, and shops".

"Operation Guardian of the Walls" dealt a severe blow to the Gaza Strip. According to reports, the IDF destroyed at least 2,000 residences, four mosques, and dozens of police stations. Roads, medical institutions, schools, and other facilities have also been partially or fully devastated.

Yet, even before the recent round of hostilities, life was challenging in the Gaza Strip, where more than half of its two million residents live below the poverty line. But al-Khodary says the rich have always made sure to help the poor.

"We are in solidarity with each other. The rich assist impoverished families not only through special projects but also through adopting people, giving out donations, and providing them with their basic needs".

Reports suggest that there are several hundred millionaires in the Gaza Strip. Some have made their money by assisting Hamas, be it in digging tunnels or smuggling goods and weapons. The wealth of others came from inheritance, as was the case with al-Khodary, who comes from a well-established family of traders.

Al-Khodary carried on the tradition of his ancestors, trading in the Arab world and importing goods into the Gaza Strip, but with time he expanded his businesses and opened up hotels and restaurants that enjoy popularity among the masses.

The coronavirus that erupted in the area in February 2020 has taken a toll on him too. Shortly following the outbreak of the virus, Hamas imposed a lockdown on the Palestinian enclave, shutting down public institutions and private businesses.

As a result, tens of thousands of Gazans have lost their jobs. Many businesses have suffered losses, including those of al-Khodary.

© AFP 2021 / MOHAMMED ABED
Years to Restore: How Coronavirus Pandemic Knocked Down Gaza Strip's Education System
"Due to the outbreak of the coronavirus, the tourism sector has almost completely stopped functioning, foreigners ceased arriving and that led to the drop in our daily investments. In addition, the pandemic has also caused poverty so people, who lost their jobs, didn't want to spend on hotels and restaurants. All they wanted was to put food on the table".

Many, however, also wanted to flee. Over the years, hundreds of Gazans have succeeded in fulfilling that goal, escaping from poverty and dire economic conditions, heading to the US and Europe. Many have also exchanged Gaza for Lesbos, Leros, and other Greek islands where they reside in refugee camps provided by international bodies.

But al-Khodary says the majority of Gazans don't consider relocation an option.

"Life in Gaza is beautiful despite our difficult situation. It is our home, and this is why it is important to build and develop it, and to prevent its potential collapse".

For that to happen, al-Khodary believes Hamas should invest in the younger generation, while youngsters should be "quick in spotting and seizing opportunities thrown their way".