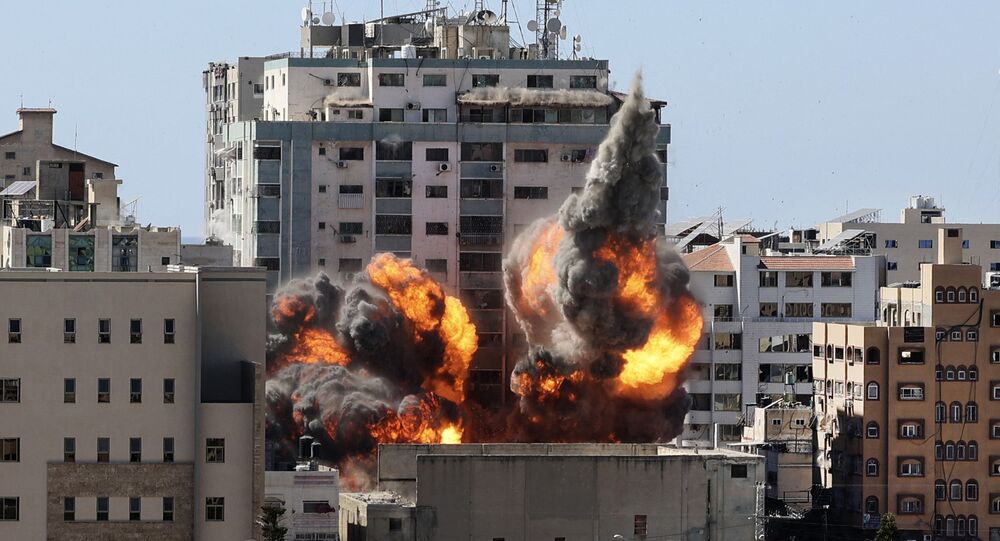 Israeli jets leveled a 12-story housing complex containing the media offices of the Associated Press and Al-Jazeera in Gaza last month amid the IDF’s campaign against Hamas militants firing rockets into Israel. The tower was one of an estimated 1,000 housing units destroyed, and 1,800 made unfit for living, in 11 days of fighting.

“Yesterday, I visited AP HQ in New York to explain to top executives that the building housing their Gaza operation was being used by Hamas terrorists to jam the Iron Dome – that is why it was prioritize[d] by the IDF during last month’s operation,” Erdan wrote in a tweet on Tuesday.

Yesterday, I visited the @AP HQ in New York to explain to top executives that the building housing their Gaza operation was being used by Hamas terrorists trying to jam the Iron Dome - that is why it was prioritize by the IDF during last month’s operation. 1/4 pic.twitter.com/3lO3SpBSTN

The ambassador went on to praise the Associated Press (AP), which fired a Jewish journalist over her pro-Palestinian tweets last month, and said Israel did not suspect AP journalists of being aware of the Gaza building’s alleged use by Hamas engineers.

“Israel did everything to ensure no employees or civilians were hurt during this operation,” Erdan continued, going on to call Hamas a “genocidal terrorist organisation that purposely places its terror machine in civilian areas, including in buildings being used by international media outlets.” The diplomat added that Israel was “willing to assist” AP in rebuilding its Gaza offices.

Erdan did not provide any evidence publicly about Hamas’s alleged advanced developments in Iron Dome jamming technologies. Israel spent several billion dollars building the system over the past decade, and is expected to ask the US for $1 billion in assistance to "replenish" the air defence equipment – more than the size of the entire Gaza economy, in the wake of last month’s conflict.

© REUTERS / AMIR COHEN
Streaks of light are seen as Israel's Iron Dome anti-missile system intercept rockets launched from the Gaza Strip towards Israel, as seen from Ashkelon May 19, 2021

Israeli planes demolished the media tower during the escalation of tensions between Israel and Palestinians in Gaza into a full-scale military confrontation last month, with an IDF officer calling the building’s owner and giving him 10 minutes to evacuate the tower before the attack.

The IDF previously claimed that Hamas militants had used the Gaza tower as a military intelligence outpost, and Tel Aviv reportedly informed Washington that they had provided the White House with “smoking gun” proof of Hamas’s operations inside the building.

AP, Al-Jazeera, International Federation of Journalists, and Committee to Protect Journalists and Reporters Without Borders all condemned the strike, with AP saying in a statement that it was “shocked and horrified” by the building’s destruction and adding that Israel had “long known the location of our bureau and knew journalists were there.”

The media tower was one of hundreds of buildings in Gaza bombed by Israel during last month’s fighting, with the office of the Qatar Red Crescent also hit by an Israeli airstrike, with no prior notice given in that incident.

Late last month, unnamed Israeli officials speaking to the New York Times expressed regret over the media tower strike, saying that the perceived benefits of destroying the alleged Hamas outpost were outweighed by the damage done to Israel’s reputation.

© AP Photo / AMIR COHEN
Israeli General Says 11-Day Gaza War Just ‘First Stage’ of Wider Campaign
However, the Israeli military has remained defiant, with IDF chief Aviv Kochavi saying recently that he didn’t have “a gram of regret” about the bombing, and insisting that he had “privately” shared with journalists that whether they knew it or not, they were "enjoying morning coffee with Hamas operatives" in the tower. AP called the “morning coffee” claims a hoax, saying there “was not even a cafeteria in the building,” and demanding an independent investigation into the destruction of their offices.

Hamas and Israel agreed to an Egyptian-mediated ceasefire on 20 May after 11 days of violence which killed over 250 people, including 64 children, in Gaza, and 13 people inside Israel. Twenty-seven Palestinians were also killed in the West Bank.