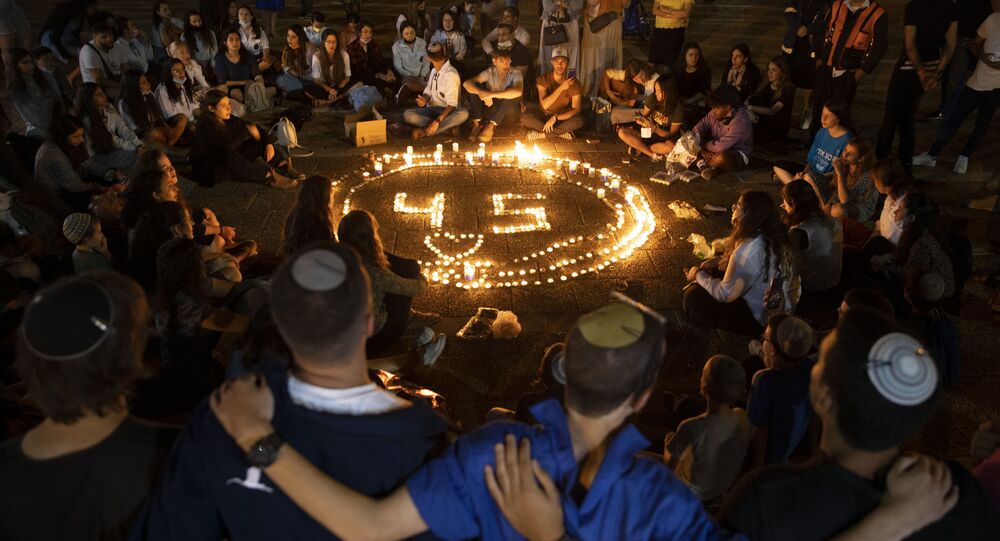 A Month After Deadly Stampede on Israel's Mount Meron, Bereaved Families Receive Cash But No Answers

The Israeli government ruled that each family would get $30,000 per person who lost their life in the stampede, which killed 45 people. But for many, this is definitely not enough and they're demanding that the state bring those responsible for the incident to justice.

It's been a month since the Mount Meron disaster, where 45 people lost their lives in a stampede at the tomb of Rabbi Shimon Bar Yochai during the Jewish holiday of Lag BaOmer.

The Jewish state has already decided to compensate the families of each victim with $30,000 per person, but many of those who have lost their relatives in the tragedy want answers, not cash.

The police know what happened during that night. In the early morning on 30 April, crowds of worshippers rushed through a narrow corridor and down the stairs after an alleged collapse of parts of the ceiling inside the tomb.

© REUTERS / Ishay Yerushalmi/Behadrei Haredim
Rescue and medical personnel are seen next to covered dead bodies on Mount Meron where fatalities were reported among the thousands of ultra-Orthodox Jews gathered at the tomb of a 2nd-century sage for annual commemorations that include all-night prayer and dance, April 30, 2021

Hot weather prompted some worshippers to pour water on themselves. The stairs that became slippery turned into a trap. But for the families of victims, this explanation is far from being enough. They're demanding a probe into the incident, and want to know who will be held accountable for their loss.

Will Police Be Held Accountable?

Initially, the blame fell on the police. They were accused of not securing the site properly, allowing too many people in, setting up barricades that prevented the worshippers from leaving the place, and not being fast enough in responding to the evacuation of those injured.

But police were not ready to take the blame. As time went by and the picture got clearer, Israel realised that the problem was much deeper.

© REUTERS / Ronen Zvulun
Israeli Prime Minister Benjamin Netanyahu visits Mount Meron, northern Israel, where fatalities were reported among the thousands of ultra-Orthodox Jews gathered at the tomb of a 2nd-century sage for annual commemorations that include all-night prayer and dance, April 30, 2021

Prior to the disaster, various government bodies were aware of the site's poor conditions. In 2008 and 2011, Israel's state comptroller alerted that the place was under-maintained and that it was unable to receive the hundreds of thousands of people that attend it on a yearly basis.

Those warnings were largely ignored. So were other alerts from the following years. Meanwhile, the site continued to accept large crowds without improving its infrastructure.

2020 was the only exception. With the coronavirus pandemic raging in Israel, authorities banned all public gatherings. Mass prayers were also prohibited and the usual rituals of crowds on Mount Meron were spared.

When the vaccine drive proved efficient and life started to gradually go back to normal, religious gatherings resumed under the pressure of Ultra-Orthodox parties.

At the beginning of April, there were reports that a number of politicians vowed to allow all worshippers to attend sacred sites, and Prime Minister Benjamin Netanyahu had no power to stop them from making that happen.

Back then, the mandate was still in the hands of Netanyahu. He needed 61 signatures for him to be able to form a government, including those of the Ultra-Orthodox parties, and he could not afford losing their support and objecting to their attempts to let crowds gather at synagogues or attend religious rituals on Mount Meron.

© REUTERS / RONEN ZVULUN
Ultra Orthodox Jews look at stairs with waste on it in Mount Meron, northern Israel, where fatalities were reported among the thousands of ultra-Orthodox Jews gathered at the tomb of a 2nd-century sage for annual commemorations that include all-night prayer and dance, April 30, 2021

Now, a month after the disaster, politicians will need to give answers. Israel is already going ahead with setting up a special committee that would investigate the causes that led to the tragedy. It is also supposed to name those who were responsible for the incident and hold them accountable.

Ultra-Orthodox parties are reportedly against such a committee, but as the pressure keeps mounting, they might not have an option and they will need to cooperate with the panel.