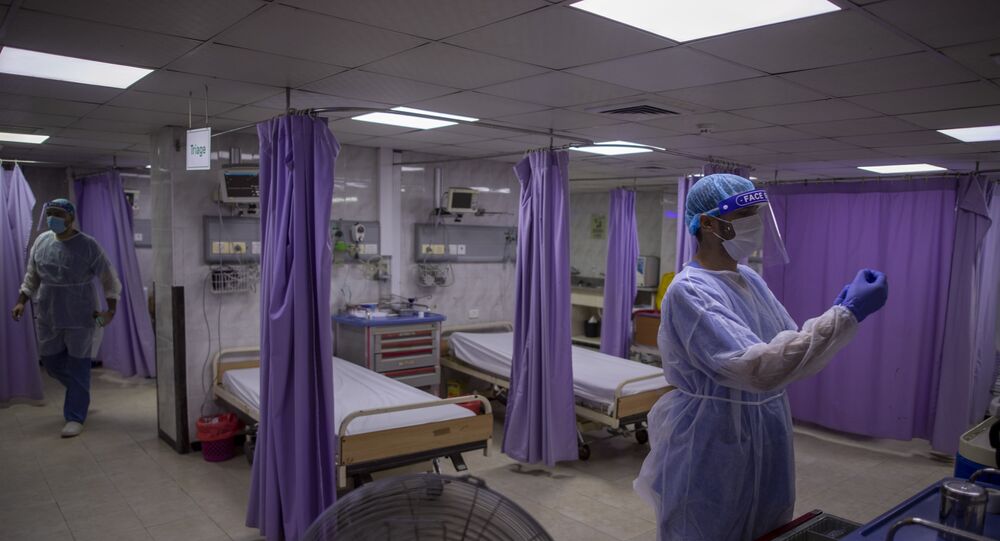 The pandemic that has already claimed the lives of more than 1,800 Palestinians in the West Bank and the Gaza Strip has also impacted cancer patients' access to medication and treatment. Now, almost one year into the crisis, some are saying they're losing hope.

Palestinians are expected to receive 5,000 doses of Sputnik V, the world's first vaccine against coronavirus, soon as Russia is set to finalise the delivery of the first batch.

Apart from the Russian inoculation, Palestinians will also receive AstraZeneca's COVID-19 vaccine in March and the American-German Pfizer-BioNTech vaccine.

Since the outbreak of the novel coronavirus in March 2020, Palestinian territories in the West Bank and the Gaza Strip have registered nearly 200,000 coronavirus cases.

More than 1,800 people have died from the disease and over 90 are in critical condition in hospitals across the PA and Gaza.

Masshaer Qudaih, a 36-year-old Palestinian from Gaza looks at the current situation with despair.

Aside from the pandemic worsening her economic situation, it has also damaged her health and general feeling of well-being.

Three years ago, Qudaih, a mother of five, discovered she had breast cancer. After she was diagnosed with the disease, she went through a long and painful process of treatment in both the Palestinian coastal enclave and Israel, forking out "tens of thousands of dollars" to pay for the procedures.

"I even came to a point, where I was forced to sell my jewelry to be able to afford the medical treatments. But later on, the Palestinian Authority came to my rescue and covered my expenses at an Israeli hospital", she recalls.

Several NGOs have also tried to help, providing Qudaih and other patients like her, with expensive medicines and other essentials but the outbreak of the virus brought that process of recovery to a halt.

Now, almost a year into the pandemic, Qudaih says she cannot continue her treatment, neither in Gaza, nor in Israel, and she is close to losing her hope.

"In Gaza, the administration of the hospital told me that they could no longer receive me because they were fearing the spread of the virus".

On a normal day, the A-Rantisi oncology hospital in Gaza, one of just two in the Strip, admits up to 150 cancer patients daily. This is in addition to their family and friends, who visit them at the facility.

The hospital's wards are relatively small yet they house four to six patients in the same room, who are also supposed to share the same toilet, something that can increase the risk of contracting COVID-19, and hurting these patients' already fragile health.

Israel, for its part, doesn't offer a solution either. Even before the outbreak of the pandemic, it only admitted a low number of cancer patients into its hospitals but after the country's government decided to seal its borders in a bid to contain the spread of the disease, it stopped letting Palestinians in altogether, unless it was an absolute emergency.

© Photo : Pixabay
COVID-19 'Delays' Lifesaving Early Breast Cancer Detection in UK
NGOs have also experienced hardships, primarily because of the closed borders and the inability to move doctors and medications inside the Strip.

And the problem, says Qudaih, is that the future still looks bleak for her and many other cancer patients like her.

"The state of my health has seriously deteriorated during the pandemic and it also affected my daily life. My immunity is weak, I cannot go out fearing that I could contract the virus and I constantly worry about my life. If the situation doesn't improve anytime soon, my condition will only get worse".

Right now, there are 12,600 cancer patients in the Gaza Strip, with the condition second to only heart disease in terms of deaths caused. Nearly 5,000 new cases were registered in the Strip and the West Bank in 2020.