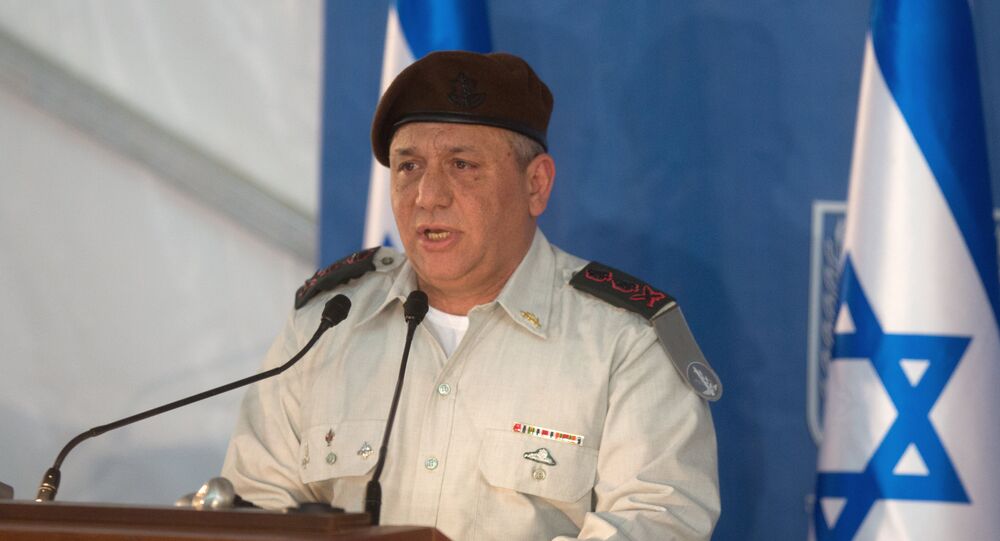 Generals to the Rescue: What's Behind Israeli Public's Obsession With Chiefs of Staff in Politics?

Following the shrinking power of the Blue and White party, that aimed at replacing Netanyahu but failed, many Israelis became disillusioned with the generals' ability to bring about much-awaited change, thinks a former politician. But the hunger for another Messiah, who'd topple the current PM, hasn't subsided.

Up until recently, Israel's former chief of staff Gadi Eisenkot was the hope of the country's liberal circles, who had prayed he would enter politics. Up until then, they were certain that his entrance to the political arena will challenge Prime Minister Benjamin Netanyahu and pave the way for his replacement.

At the end of December, however, those hopes have come crashing down, with Eisenkot announcing he would not run in the upcoming parliamentarian race set for 23 March.

But the hunger of Israel's liberal circles for army generals or people with relevant military background has not ceased.

Mossi Raz, a former member of the Knesset for Meretz, an Israeli party associated with left-wing circles that promotes notions of equality and speaks in favour of the two-state solution, says that the obsession with generals is largely attributed to the idea that only they can bring the country's liberals a much-awaited victory in the elections.

"The left has not been in power in Israel for many years. In fact, it only managed to get through when it had such generals as Yitzhak Rabin and Ehud Barak leading the camp, so many started to believe that this was the formula. If they have chiefs of staff, there will be victory."

For many Israelis, who have gone through two Intifadas and who have seen multiple wars and terrorist attacks, the factor of security is paramount.

In 2019, for example, a survey showed that 30 percent of the Israeli public said the security factor would end up determining the country's elections, as opposed to slightly more than 20 percent who shared similar views about the economy. Other issues like separation of religion from state, equality and education were less important for those polled.

"The problem is that the left is focusing on the economy, and this is where we lose, because when the public cares about security, the most natural thing for them is to vote for those, who are experts in this field, or in other words army generals," explains Raz, suggesting that those have been traditionally associated with conservative circles.

Do these generals deliver? Israeli history reveals more or less lacklustre performance. Rabin did produce historic results, as he was the one to bring a peace treaty with Jordan and seal a deal with the Palestinians, for which he was slammed and later assassinated.

However, those who came after him were considered far less successful.

Barak, for example, who was prime minister from 1999 till 2001 and whose name is associated with the withdrawal of the IDF from Lebanon, where they had been fighting Hezbollah, an ally of Iran, has been branded as "Israel's most failing PM".

In the previous round of elections, he started off with the Labour party. Then he took the tenth place in their united list with Meretz and now, with yet another poll looming, he seems to be hesitant about his future plans.

Benny Gantz, Gabbi Ashkenazi and Moshe "Bogie" Yaalon, the three chiefs of staff who formed a united front aimed at replacing Netanyahu, have failed to achieve that goal.

Gantz's party that in previous polls brought him more than 30 out of 120 seats in the Israeli parliament, but it is now toothless, barely passing the threshold, according to some surveys.

Ashkenazi decided to take a break from political life, whereas Yaalon, who is still determined to fight back, is struggling to find a party that would take him in, given his past failures to deliver.

Raz is not the only one to think this way and the Israeli press is replete with op-eds and analysis pieces that try to explain the failure of generals who dared to try their luck in Israeli politics and who mostly failed.

Now after another fiasco of those generals, Raz is certain that the country's liberal circles will be looking for someone else to change the situation in Israel but it won't relinquish its dream of replacing Netanyahu.

"Just like in previous rounds, these elections will revolve around whether you support or oppose Netanyahu. The public will not be happy if another general will join the race because we all saw what happened to the Blue and White. But they will be looking for another Messiah, who would be able to take the country out from the desperation it is currently in."