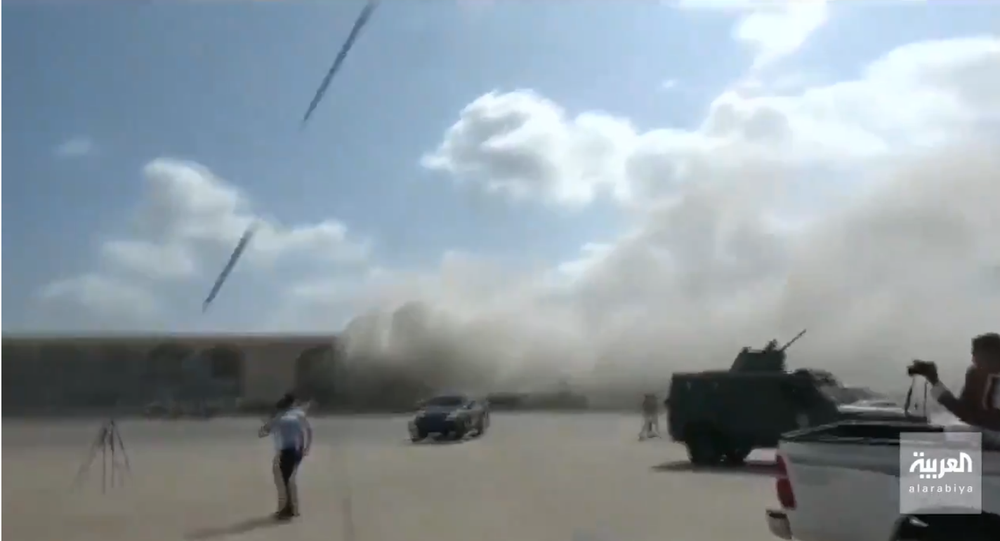 At least 22 people were killed and over 50 others injured in Wednesday’s attack on Aden Airport. Moammar Al-Eryani, information minister in the new Saudi-backed government, has blamed the attack on the Houthi militia although the group has yet to issue any formal statements.

The first footage showing the attack on Aden Airport has appeared online. In the video, which has yet to be independently verified, a missile hits the tarmac and creates a fireball that nearly consumes a stationary vehicle nearby.

The footage also shows billowing smoke from a nearby terminal building and the apparent sound of gunfire as government and military officials, journalists, and observers duck for cover or get into vehicles in a bid to escape the carnage.

At least 22 people were killed and dozens more injured in the wake of Wednesday’s attack on Aden Airport. A source told Sputnik that none of the members of Yemen's new cabinet were hurt. The ministers are said to have been transferred to the safety of Maasheeq presidential palace.

The new government’s information minister blamed the attack on the Houthis, the militia group which has been in control of much of the country, including the capital of Sanaa, for over six years, and which has been targeted by a Saudi-led coalition since 2015.

The new cabinet arrived in Aden following a formal inauguration ceremony in Riyadh, Saudi Arabia on Saturday, after a power-sharing deal had been reached between the government of Saudi-based exile president Abd Rabbu Mansour Hadi and the Southern Transitional Council (STC), a separatist government in control of much of the country’s south. Receiving support from the United Arab Emirates, the STC was formed in 2017, two years after Saudi Arabia and other Gulf States began their intervention in the Yemen conflict.

© REUTERS / FAWAZ SALMAN
Live Updates: 22 Dead, Over 50 Injured as Blast Rocks Yemen's Aden Airport Upon Gov't Plane Landing
The Houthis have not claimed responsibility for Wednesday’s airport attack. However, the group has previously launched dozens of missile and drone attacks against Hadi loyalists, the STC and Saudi Arabia proper, hitting military facilities, airports, ports, and other infrastructure. In September 2019, the group took responsibility for a major attack on a pair of Saudi oil processing facilities which temporarily halved the kingdom’s oil production.

The war in Yemen has devastated the already impoverished nation, with over 233,000 people killed, both during the fighting and as a result of a humanitarian crisis. The United Nations estimates that up to 22 million people, or three quarters of the country’s population, are in dire need of humanitarian assistance, including urgent food aid.