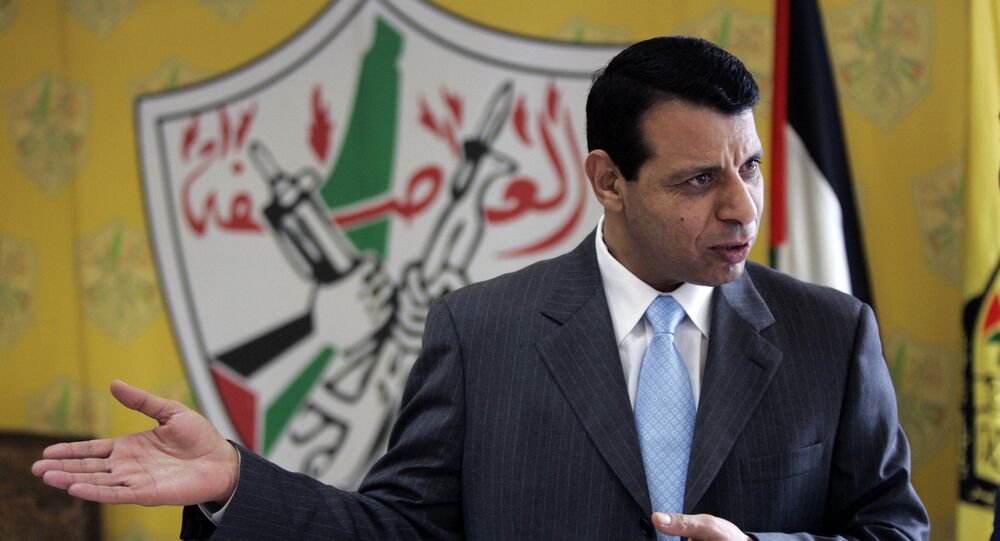 Palestinian Leader-in-Waiting? Who's Mohammed Dahlan and How Likely Will He Replace Abbas?

A delegation of Hamas and Fatah officials are set to meet in Cairo on Monday to hold another round of talks that would pave the way for their reconciliation, Israeli media reported.

If the upcoming negotiations between Hamas and Fatah bear fruit, and the Palestinian factions manage to bridge the gaps that widened in 2007 following Hamas' seizure of the Gaza Strip, the Palestinians are likely to head to the polls in spring of 2021. However, it is still unclear whether Israel will allow these elections to take place in East Jerusalem, home to more than 300,000 people.

Elections as a Challenge

For Palestinian leader Mahmoud Abbas, these elections, if they end up happening, are expected to pose a serious challenge.

Over the years, his reputation has cracked, whereas his approval ratings hit a low in February, when a survey revealed that 62 percent of Palestinians wanted him to leave office, as opposed to 33 percent who objected to his resignation.

The anti-Abbas sentiments have only grown stronger with the eruption of the coronavirus pandemic that has pushed the Palestinian economy into an unprecedented crisis from which it is still struggling to recover.

And now, with elections on the horizon, that sinking popularity might hamper his re-election chances, especially given the fact that other contenders who are set to run in the race enjoy greater public support than the long-time president.

One of thse contenders is Mohammed Dahlan, a former security chief of Fatah and one of the group’s ex-leaders in the Gaza Strip.

Back in the day when Fatah was still running the show in the Palestinian enclave, Dahlan was close to President Abbas and even served as his security adviser.

That partnership, however, didn't last long. In 2007, Hamas took control over the strip, driving the forces of Fatah out of the enclave. Dahlan fled the area and entrenched himself in the West Bank. Although back then he still enjoyed popularity, his relations with Abbas started going from bad to worse.

The president reportedly held Dahlan responsible for the failure to retain the Gaza Strip in the hands of Fatah, accusations denied by the former security chief.

© REUTERS / MOHAMAD TOROKMAN
Partners in Crime: Are Abbas, Hamas and Israel United Against Palestinian Elections?
Rumours that the US was grooming Dahlan to be his successor as well as reports that suggested a big chunk of Fatah officials preferred the former security chief over the president aggravated the situation further and this eventually led to an explosion.

In 2011, Dahlan was suspended from the Fatah party, his home was raided, and he was forced to flee the West Bank, finding refuge in the United Arab Emirates.

Now, he appears to be in for a comeback.

Although Dahlan hasn't announced his intention to run for the presidency yet, the prospect of him putting forward his candidacy makes many Fatah officials sweat, and Dimitri Diliani, a member of the group’s Revolutionary Guard and a man who has known the former security chief for years, says the PA leadership has every reason to worry.

"Dahlan is charismatic and yet very down to earth. He is hard working, organised and well-connected. He is not part of the Palestinian apparatus and this is why so many would like to see him in office", Diliani explains.

That detachment from the allegedly corrupt Palestinian government has largely proven itself, and Diliani claims the popularity he enjoys in the Gaza Strip and the West Bank is impressive.

Yet, a recent poll found that only six percent of Palestinians saw him fit to stand at the helm of the Palestinian Authority and replace its current leader.

The low numbers can be attributed to several factors. PA officials close to Abbas have repeatedly said that Dahlan was corrupt. In 2011, a Palestinian court even ruled that he was embezzling official funds and that he tried to accumulate weapons to seize control over the West Bank and oust President Abbas.

Allegations have also been made that Dahlan was involved in the killing of Palestinian Liberation Organisation chief Yasser Arafat in 2004, although doubts run high as to whether the Palestinian public actually buys these and similar accusations, considering their long record of not telling the truth.

© Sputnik / Ahmed Abed
Second Intifada Was Natural Response to Israeli 'Occupation', Top Abbas Adviser Says
What the public does buy, however, is the connection of Dahlan to the ruling UAE family and allegations that he played a pivotal role in creating a bridge between Israel and a number of Arab nations, eventually leading to the signature of normalisation pacts between them.

In his interview with the Middle East Eye, Dr Sattar Kassem, a former presidential candidate, said that in the eyes of the Palestinian public, Dahlan was no better than Abbas. In fact, he was a copy of him.

"The way I see it, there is no difference between Mahmoud Abbas and Mohammed Dahlan. If Dahlan takes over Fatah, he will [continue to] fight with Hamas and coordinate with the Israelis".

And this is something that the Palestinian public is trying to avoid.

In 2019, a Palestinian survey found that the majority of Palestinians wanted to see Fatah and Hamas reconcile, whereas another study found that 64 percent of those asked opted for an armed struggle against Israel rather than cooperation with it.

If these findings are accurate, Dahlan's return to the central stage of Palestinian politics may be thorny, especially given the fact that he is now perceived as a man who brokered Israel's deals with two Gulf nations at the expense of his own people.

Abbas, on his part, will also want to make sure that Dahlan stays out of business and the recent crackdown on his supporters in the West Bank was just a message to the former security chief to stay at bay.

Diliani says these measures will not deter Dahlan if he decides to set foot in the area he left some nine years ago, but claims he is unlikely to do so to prevent potential bloodshed.

"He has enough people to protect him but he knows that if he comes back, there will be a civil unrest. To prevent that from happening and because he is caring for peace, Dahlan will not be coming back any time soon".

"Dahlan is already a winner. He has the loyalty of most Fatah officials and he is not even paying them salaries, which cannot be said about Abbas, who tends to buy loyalty".