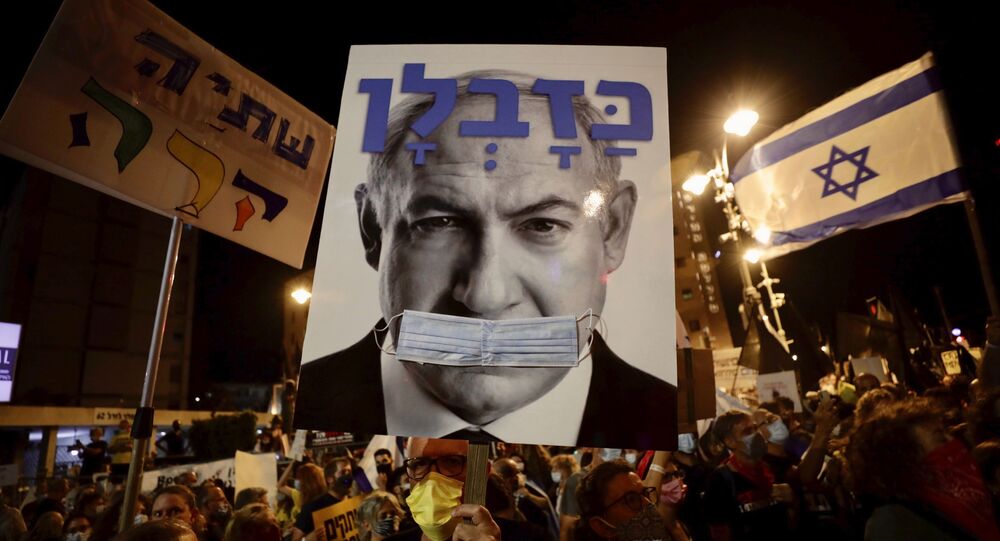 Israel is the only country to dictate where protesters could demonstrate, previously introducing legislation barring residents from exceeding a one-kilometre radius from their homes. Now that this restriction has been lifted mass rallies promise to erupt with even bigger force. One such demonstration is already scheduled for Saturday.

Israel will remain in a state of lockdown until at least midnight Sunday, the coronavirus cabinet set up to tackle the crisis decided on Tuesday.

But the government will not renew emergency regulations that banned Israelis from exceeding a one-kilometre radius from their homes, meaning that prayers and protests in remote places are once again possible.

Groups of protesters have already said that they intend to hold a mass rally against Prime Minister Benjamin Netanyahu on Saturday.

Just like in previous weeks, they will call for him to step down following his alleged mishandling of the coronavirus pandemic and his three corruption charges; and Dr Amir Fuchs, the head of the Defending Democratic Values Programme at the Israel Democracy Institute, says it is every citizen's "basic right to be able to protest against the government".

That right was taken away from Israelis at the end of September, when the government decided to impose a number of restrictive measures on protesters, limiting their numbers, forcing them to adhere to a distance of two metres, and banning them from exceeding a one-kilometre radius around their homes.

The government explained its decision due to the growing numbers of coronavirus patients, which at the time were in excess of 5,000 people daily. But the move sparked a barrage of criticism from various liberal groups that slammed Netanyahu and accused him of passing the law for personal gain.

By citing "personal gain" they referred to the PM's alleged desire to limit the mass rallies taking place in Israel for weeks and that have intensified during the second wave of the pandemic that started a month ago.

Netanyahu never admitted that this was his real intention and has always stressed that the demonstrations against him were dangerous, calling them a "coronavirus incubator", while those participating in rallies were touted as "anarchists" accused of not adhering to the rules and obstructing public order.

"There was no epidemiological excuse to limit those protests", said Fuchs, referring to claims, according to which scientists could not find any evidence those rallies were contagious.

"At the same time, I do not think that Netanyahu was moved by political reasons only. He did want to limit those demonstrations but the health situation in Israel was bad and restrictive measures were indeed needed. Yet, the government's decision was disproportionate, especially if you compare it to the way other countries have treated gatherings amid the pandemic".

According to Fuchs' research, a number of European states have opted for mild measures when limiting rallies amid the raging virus.

Denmark and the Czech Republic, for example, didn't introduce any limitations on protests at all, while Spain and Portugal, who did ban public gatherings, demonstrators were given a permit from local authorities.

"Israel was the only country that introduced the one-kilometre rule and thus told demonstrators where to rally. By doing so it almost took away their right to protest, a move that only triggered more dissatisfaction and opposition".

Two weeks ago, more than 100,000 people took to the streets across Israel to protest against Netanyahu and his alleged mismanagement of the crisis, and now, with the main obstacle on mass demonstrations lifted, more rallies are expected, including in front of the prime minister's official residence in Jerusalem.

For Fuchs, the fact that the emergency regulations have expired and that the government didn't prolong them was a sign that Israel's democracy is alive and kicking.

"Of course, we will not go back to what we had before, when protests were free and unlimited but the government will no longer dictate where people [can] demonstrate. This is why we shouldn't take our democracy for granted. It is fragile and we should protect and cherish it".