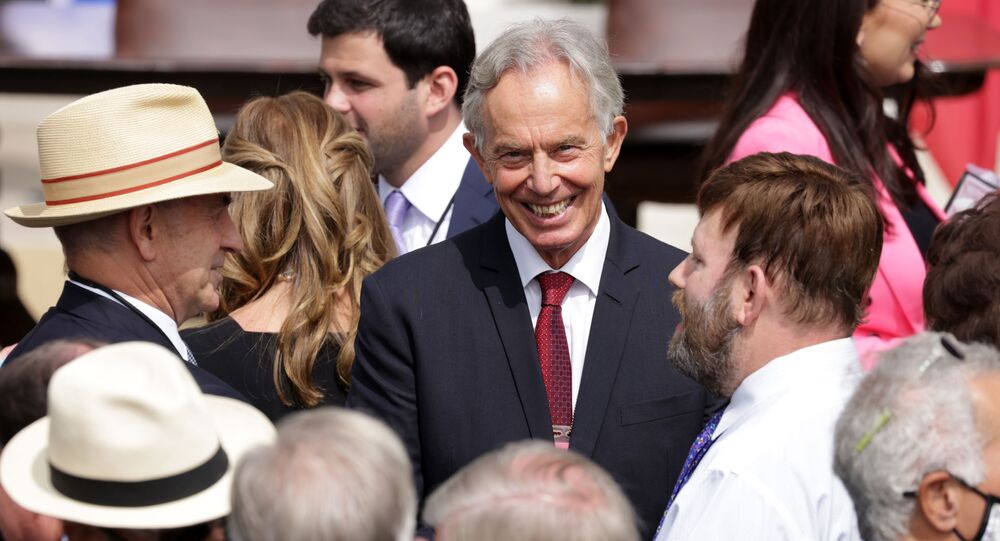 The former British prime minister and Tony Blair Institute for Global Change chairman was a guest at last week’s signing of the Abraham Accords between Tel Aviv, the United Arab Emirates and Bahrain, and has touted his own work on “deepening relationships between Israel and the Arab world.”

Ex-UK Prime Minister Tony Blair has praised the rise of a new regional approach for solving the Israeli-Palestinian conflict, saying it was about time that Israel and the Arab countries work to normalise relations, instead of waiting for the Palestinian issue to be resolved first.

“I came to two conclusions, not just from the 12 years since I left office but even before that when I was in office," Blair said, speaking at a virtual conference hosted by The Jerusalem Post on Thursday.

“The first was that this isn’t really a question of negotiation around territory. It is of course, but it’s not primarily about that. It is about genuine, deep cultural acceptance. Secondly, I came to the conclusion that the foundation of the approach in the region which is ‘Israelis and Palestinians negotiate peace then the rest of the region joins in’ was literally the diametric opposite of what needed to happen. What you need to do was to create peace between Israel and the Arab nations and include the Palestinian issue in that peace,” the retired politician added.

According to Blair, what’s needed now is for Israel, the US and their allies to “bring forward and persuade a generation of Palestinian politicians that the only way that you’re going to get a Palestinian state is through a genuine and deep understanding between people, between cultures, and not just a negotiation around territory.”

The former Prime Minister and Labour Party leader did not specify what steps the West would have to take to "bring forward" these new Palestinian leaders. Existing leaders from the Palestinian Authority in the West Bank and Hamas in Gaza have called the recent move by the UAE and Bahrain to establish relations with Israel as a “betrayal” of the Palestinian cause and a “treacherous" stab in the back.

Eighteen of the Arab League’s 22 members continue to have no formal relations with Israel.

Blair, who was Britain’s Prime Minister between 1997 and 2007, and along with US President George W Bush instigated the 2003 invasion of Iraq to eliminate the nation’s (non-existent) weapons of mass destruction, praised the signing of the Abraham Accords last week, calling the agreement “a massive and welcome opportunity to recast the politics of the region in a way consistent with the only future for the Middle East which works.”

© AFP 2020 / GHAITH ABDUL-AHAD
British paratroopers participate in exercises with helicopters from the 845 Royal Navy Squadron in the southern Iraqi city of Basra, January 16, 2005.

The joint US-UK invasion of Iraq in 2003 led to the destabilisation of the region, the death of more than a million Iraqi civilians, as well as 4,825 US and 179 British troops. In 2014, Iraq witnessed the rise of the Islamic State (Daesh)* terrorist group, with that conflict spilling over into neighbouring Syria and leading to the displacement of more than 11 million Iraqis and Syrians and the death of tens of thousands of civilians.