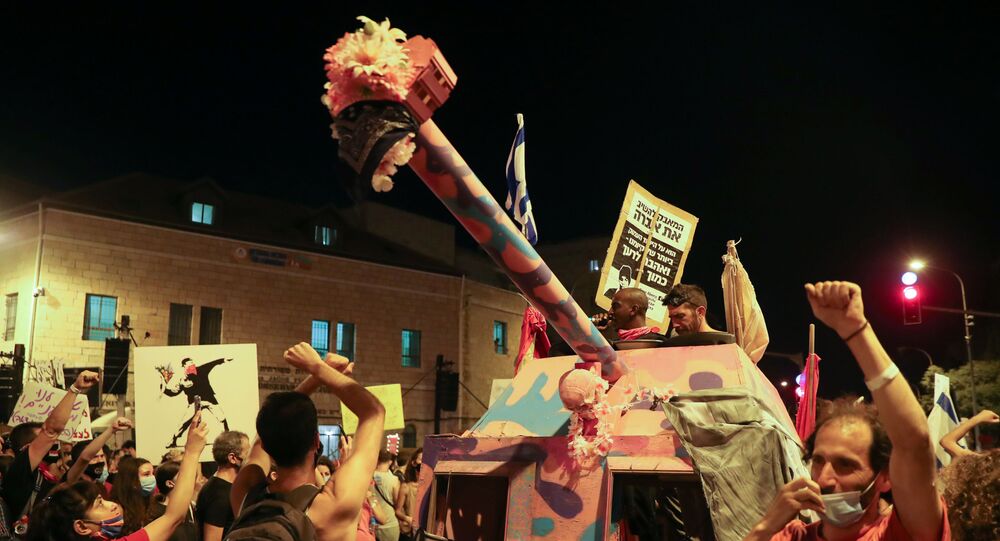 TEL AVIV (Sputnik) - Two police officers sustained injuries and 12 people were arrested as anti-government protests in Jerusalem grew into unrest, the Israeli police said in a press release on Saturday.

Earlier in the day, the Israeli police warned that they would suppress any protest breaking the authorised noise level as people took to the streets for the 11th Saturday straight. Footage from the scene show protesters, carrying inflatable models of submarines with the inscription "investigation", initiating clashes with law enforcement which try to push them back.

"Police in Jerusalem are responding to an unauthorised protest. Protesters have broken the police cordon. Two officers have sustained injuries", the press release read.

As reported by The Times of Israel, the protests in Jerusalem had several simultaneous hot spots, with thousands in attendance. The groups reportedly marched from different parts of the city towards the central Paris Square, where the residence of Prime Minister Benjamin Netanyahu is located.

🏴🇮🇱 The banner for Democracy Square is hung in front of the Terra Sancta College, that abuts Jerusalem's Paris Square pic.twitter.com/oWrW2qlNFs

Senior Jerusalem police commander Amir Barazani was quoted in the report as saying that 12 people were arrested overnight the Saturday protests. This includes performance artist Zeev Engelmayer, who had shown up in a costume depicting a naked woman.

Police said in a statement, as quoted in the report, that Engelmayer's costume was found unacceptable due to that it "could constitute sexual harassment of the public".

In Israel, a notorious corruption case, known as Case 3000, has been underway since 2018. It implicates high-ranking officials from the Netanyahu government in illegal soliciting of multi-million-dollar state contracts on nuclear submarines for German company Thyssenkrupp. Several individuals close to Netanyahu were indicted in Case 3000 on various corruption-related charges, including suspicion of fraud, breach of trust, and conspiring to commit a crime.

Netanyahu himself was indicted in several other cases on charges of illegal lobbying for positive media coverage, corruption, and bribery, among other things.

The next hearing in his cases is scheduled to take place on 6 December.