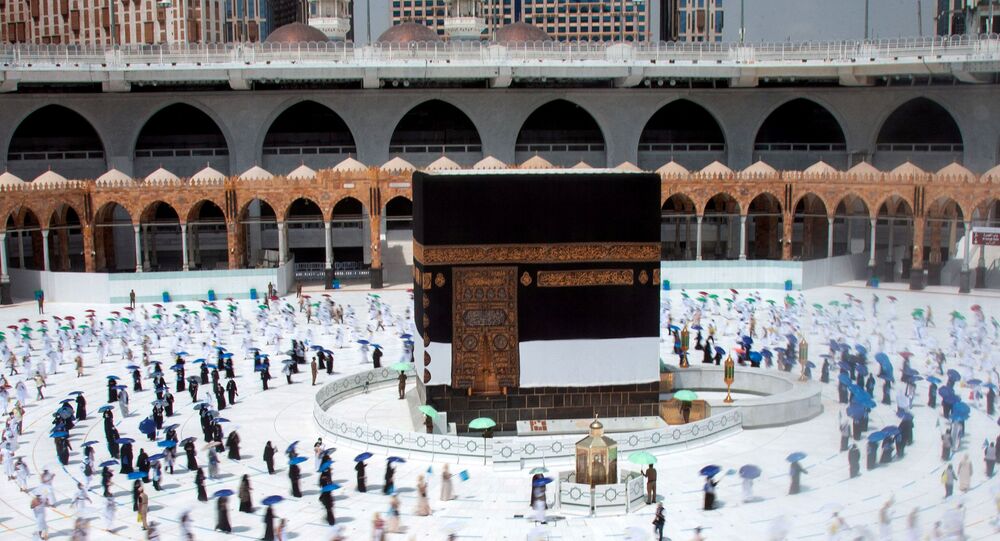 Hajj Amid Pandemic: What Will Be Different About This Year's Pilgrimage to Mecca?

The Hajj starts on 29 July in Saudi Arabia, and only about 1,000 people will be able to take part in the pilgrimage this year due to the COVID-19 pandemic. The Hajj will last six days, ending on 2 August.

As Hajj pilgrims face a number of restrictions this year due to the ongoing pandemic, Sputnik talked to Saudi experts to find out what will be different compared to previous years.

Earlier, the Kingdom announced that only about 1,000 people would be able to take part in the Hajj this year due to the precautions against the coronavirus. In 2019, 2.5 million people from all over the world took part in the Hajj.

© REUTERS / SAUDI PRESS AGENCY
Muslim pilgrims circle the Kaaba at the Grand mosque during the annual Haj pilgrimage amid the coronavirus disease (COVID-19) pandemic, in the holy city of Mecca, Saudi Arabia July 29, 2020.

According to the Ministry of Hajj, non-resident citizens will make up 70% of the total number of pilgrims this year. Mostly doctors and security personnel, especially those who've recovered from the coronavirus, were selected from the Kingdom’s residents.

In turn, Saad Jamil al-Quraishy, member of Saudi Arabia’s National Commission for Hajj and Umrah, pointed out that due to the many restrictions imposed, this year’s pilgrimage may be called symbolic.

“This year’s pilgrimage breaks all established traditions: as you know, no one will be able to come from abroad. 1,000 pilgrims is a drop in the ocean. Unfortunately, due to the pandemic we cannot receive millions of people in a relatively small area. This year’s Hajj turns out to be more symbolic than real", he said.

“If earlier we imported a huge number of sheep for the holiday, this year we won’t have to do this. There will be no foreign pilgrims and guests; and our sheep will be enough for our own needs", Al-Quraishy added, speaking about importing animals for Eid al-Adha.

Muhammad al-Muajel, Chairman of the tourism committee at the Riyadh Chamber of Commerce and Industry, explained that the Hajj can’t be completely abolished, since no one can remove one of the pillars of Islam. However, certain things had to be suspended due to precautions, including the ritual part of the pilgrimage.

“Unfortunately, we had to sacrifice some of the rites. The stones used for the Stoning of the Devil will be disinfected. No one can come up to kiss the Black Stone. All pilgrims must wear face masks. Moreover, this year the Kingdom won’t import any sacrificial animals", he said.

According to the expert, the tourism sector will suffer the most from the restrictions imposed.

“The Kingdom has lost 4 million tourists and pilgrims, and this is about 2.5 billion Saudi riyals. However, the Ministry of Tourism is planning to encourage domestic tourism this year; this will help to somehow compensate for the losses", he explained.