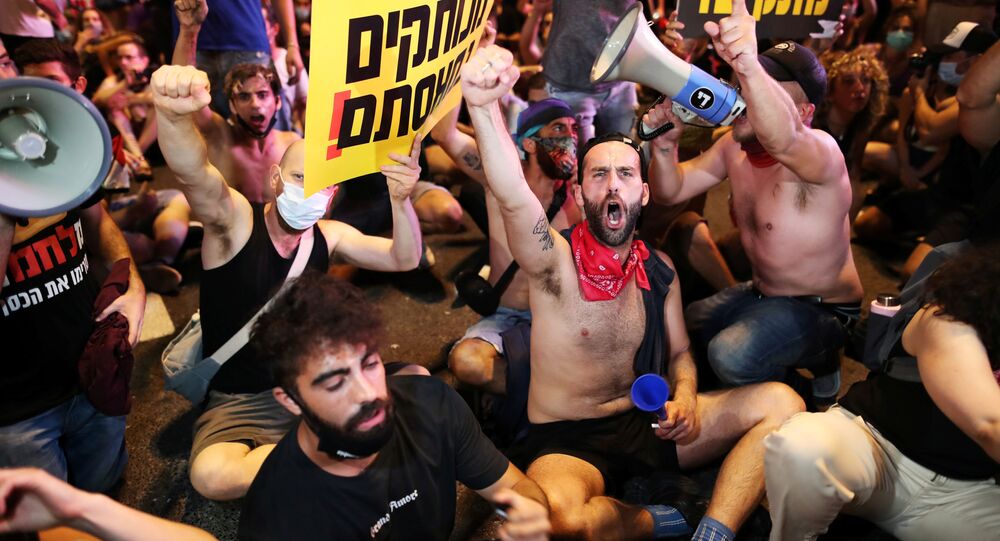 A massive protest erupted in the Israeli capital on Saturday, as citizens are dissatisfied with the government who they say has failed to address the economic challenges during the COVID-19 pandemic.

Protesters engaged in clashes with police during a massive rally on Saturday, videos shared online show.

According to the Jerusalem Post, as the Saturday rally was about to end, protesters blocked the roads on their way from Rabin Square. Clashes occurred at several spots, including Ibn Gabirol Street, Rothschild Boulevard and the Azrieli intersection, The Times of Israel reported.

Some were throwing eggs at the police.

Police were on the spot to disperse the crowd and restore order, the authorities said. Some of the officers were on horseback. Arrests have also been conducted by police, online footage shows. According to media reports, at least 19 people were arrested.

Thousands of protesters reportedly gathered on Rabin Square on Saturday to protest the government's handling of the coronavirus pandemic.

Due to the virus-induced measures, small businesses have suffered the most, as they have had to remain closed until the economy fully reopens. Other people have also lost their jobs or have been furloughed.

The Israeli government eased COVID-19 restrictions in May as new cases per day started to drop, but reintroduced some of them recently, as the daily number of infections began to grow again.