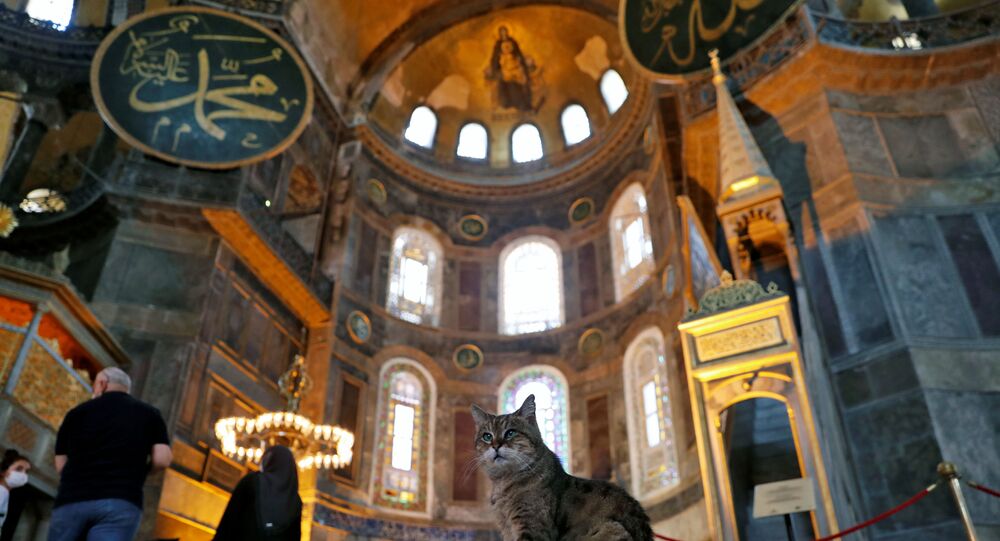 The EU, along with a number of countries, including Greece, France, and the US, have already voiced serious concern over Turkey’s decision to convert the Hagia Sophia into a mosque, a move that came amid fears over the future of the Christian shrines in the UNESCO World Heritage Site.

During upcoming Muslim prayers in the Hagia Sophia, its ancient mosaics depicting Jesus, Mary, and Christian saints may be covered with special technology and lighting, the Greek City Times reports.

According to the news outlet, special curtains will be used during the prayers, “while carpets will be placed on the floor which will be illuminated to darken the space” so as not to show Christian images.

This will apparently see visitors to the Hagia Sophia being asked to take off their shoes before entering the temple.

© AFP 2021 / OZAN KOSE
A woman takes a picture with mobile phone inside the Hagia Sophia museum in Istanbul, on July 2, 2020. - Turkey's top court considered whether Istanbul's emblematic landmark and former cathedral Hagia Sophia can be redesignated as a mosque, a ruling which could inflame tensions with the West.

The report comes after Turkish presidential spokesperson Ibrahim Kalin assured on Friday that “a loss from the world's heritage is not in question” as far as the Hagia Sophia is concerned.

Speaking to the Turkish news agency Anadolu, he stressed that “opening up Hagia Sophia to worship doesn't keep local or foreign tourists from visiting the site”, and that Turkey would preserve the unique Christian icons and mosaic images of Jesus Christ in the building.

Kalin, however, did not elaborate on the matter, further, fuelling concerns about the future of these Christian shrines following the Turkish president’s decree earlier on Friday to convert the Hagia Sophia into a mosque.

This was preceded by Metropolitan Hilarion of Volokolamsk from the Russian Orthodox Church warning last week that the temple’s “miraculously spared” mosaics will most likely be damaged if Ankara makes the conversion decision.

In an interview with Russia’s Rossiya 24 news outlet, he said that he would like to know about “the fate of these mosaics” and “how this building will function if it is turned into a mosque again”.

He spoke after the EU’s High Representative for Foreign Affairs and Security Policy Josep Borrell lamented Erdogan’s “regrettable” move on changing the status of the Hagia Sophia.

© REUTERS / Murad Sezer
Views of Hagia Sophia in Istanbul as Court Annuls 1934 Ruling - Video
The same tone was struck by Greek Prime Minister Kyriakos Mitsotakis, who said that Athens “categorically condemns Turkey's decision to convert Hagia Sophia to a mosque” and that “this decision, taken 85 years after Hagia Sophia was declared a museum, is an affront to its ecumenical character”.

The US State Department, in turn, expressed disappointment over Ankara’s decision on what it described as “an important part of the 'Historic Sites of Istanbul' UNESCO World Heritage Site”.

On 10 July, Erdogan confirmed that he had signed a decree on the temple’s new status, shortly after Turkey's highest administrative court annulled the 1934 decree converting the Hagia Sophia into a museum, meaning that it can now be used as a mosque.

First Muslim Prayers to Be Performed in Hagia Sophia on July 24, Erdogan Says