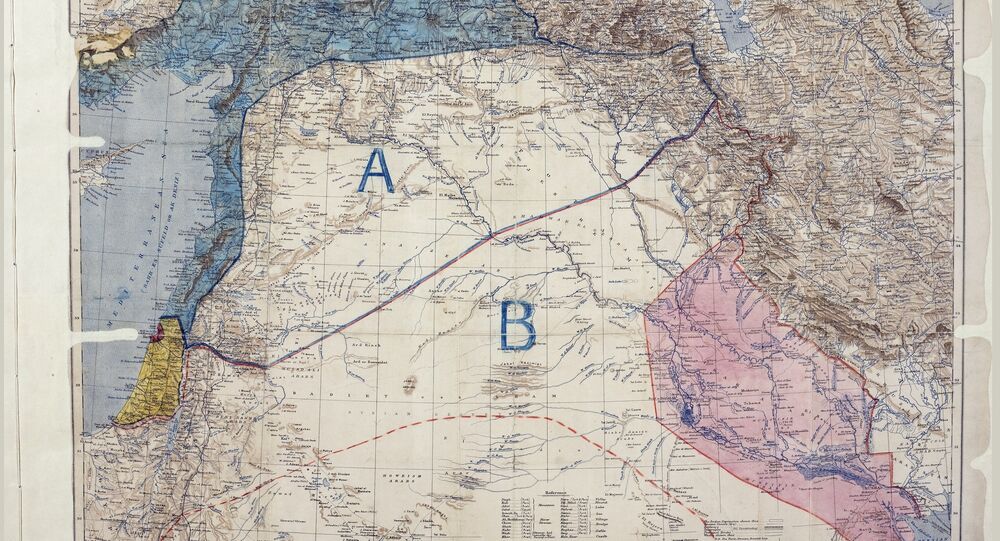 It has been 104 years since the ratification of the Sykes-Picot agreement, a pact that divided the Middle East between the victorious allies of the First World War after the collapse of the Ottoman Empire.

Signed by the diplomats of Britain and France and okayed by Russia and Italy, the deal, inked in 1916, granted London control over today's Israel, the Palestinian territories, Iraq and Jordan. The French were given access to Syria and Lebanon, whereas Russia was set to get western Armenia, Constantinople and the Turkish Straits. Italy was to receive southern Anatolia.

Often referred to as the "root of all evil" in Middle East's modern history, the pact is still being debated by experts who are trying to answer the question, whether the deal was legitimate and Dr. Mordechai Kedar, one of Israel's leading Middle East experts, says the answer to that is widely disputed.

"The Arabs and Muslims, who inhabited these areas, considered the agreement illegitimate and looked upon themselves as the rightful owners of this land. The West, on the other hand, was convinced that the mere fact of liberation gave them the right to control those areas and promote a set of their interests there".

One such interest was the desire to keep controlling the Suez Canal that shortened the western vessels' routes to India bypassing the dangers of Africa, while the other was the colonialists' urge for oil.

After scrapping the use of coal and replacing it with oil, the British navy was looking for steady supplies of crude and the Middle East, rich in this resource, presented them with such an opportunity.

To make sure their interests were maintained, the colonial powers placed stooges in the areas they came to control and implemented a "divide and conquer" policy, dispersing some ethnic groups, like the Kurds, between vast territories, while framing other, very often incompatible, ethnicities in one area without taking into account the demographic, socio-cultural and religious aspects of the region. That, very often, led to chaos, turbulence, instability and a lot of spilled blood.

But that mess was just the beginning. "The Sykes-Picot agreement only divided the areas between the world powers, it didn't create states. That decision occurred much later when the League of Nations gave Britain and France a mandate over these areas [in the early 1920s], while the idea was that by the end of their 25 year long rule, these entities would finally become independent," explained Kedar.

The only problem was that people of the area, who have been hoping to get independence instead of the mandate that was perceived as no more than colonial rule, did not want to wait, rocking the already shaking boat with clashes, riots and demonstrations, problems that never ceased even after the last foreign soldiers left the region's soil.

"You can't sit peoples with major differences around the same bonfire and expect them to be united around a common goal. The modern state failed to replace people's traditional allegiances because apart from artificial borders nothing really glued them and that often resulted in failed states mired in violence and blood," said Kedar.

The only countries that managed to avoid that fate, says the Israeli scholar, were the ones comprising homogeneous tribes, something that can be seen in the seven Emirates of the UAE, Qatar or Kuwait, and something that can also be applied to the Palestinians.

"Palestinians are a tribal community residing in eight major areas which possess traditional tribal leadership structure: the Gaza Strip, Jenin, Nablus, Ramallah, Jericho, Tulkarem, Qalqilia and parts of Hebron. That's why establishing one state will not help them to achieve any stability. What they need is an eight-state solution".

In 1993, after a long and laborious peace process mediated by the Americans, Israel and the Palestinians struck a historic deal in Oslo that paved the way for the creation of the Palestinian Authority, with the idea that over the years Palestinians will get their own independent state in the West Bank and Gaza.

© Photo : Rex Features
Yasser Arafat shakes hands with Yitzhak Rabin on the Oslo Accord at the White House in 1993. A peace treaty designed to deliver the "right of the Palestinian people to self-determination"

However, 12 years later, in 2006, that utopia collapsed after militants of Hamas, considered a terrorist organization in Israel, seized control over the coastal enclave, ousting the Strip's previous rulers, the officials of Fatah, and prompting Tel Aviv to impose a full blockade of Gaza that eventually led to an acute economic and humanitarian crisis.

For Kedar that disintegration made perfect sense. "Gaza might have a lot of problems with Israel but they do function well internally simply because they know how to manage those clans that make up the Gazan society," he said, suggesting that Israel should apply that pattern on other Palestinian areas.

The problem is that no one in Israel's ruling elite is listening, says Kedar.

According to some estimates, 80 members of the 120 parliamentarians that make up the Knesset support a two-state solution to the Israeli-Palestinian conflict.

Israel's general public is also supportive of this idea with a 2018 poll suggesting that 47 percent of the country's Jewish population believed it would bring peace to the volatile region.

© AFP 2020 / HAZEM BADER
Demonstrators wave Palestinian flags as they burn effigies of US President Donald Trump and Israeli Prime Minister Benjamin Netanyahu during a protest against Trump's proposed Israeli-Palestinian peace plan, dubbed as the "deal of the century", outside an Israeli checkpoint in the flashpoint city of Hebron in the occupied West Bank on February 28, 2020.

Yet, the trend is slowly changing. In 2007, for example, some 70 percent of Israelis expressed their support to the solution coined in 1993 but a decade later that number has dropped to 63 percent and has continued to dive down ever since.

The reason for this, says Kedar, is the realization of many that a two-state solution won't work. "When then foreign Minister Shimon Peres [who was one of the architects of the peace agreement with the Palestinians] wrote his book detailing his vision of the new Middle East [that called on all the conflicting sides to scrap bitter memories and work together towards a joint goal of prosperity and stability], many in Israel were enchanted by the idea. Soon enough they realized that was a fiction. Nevertheless, it is not too late to change that equation: all politicians needs to do is to listen," he summed up.