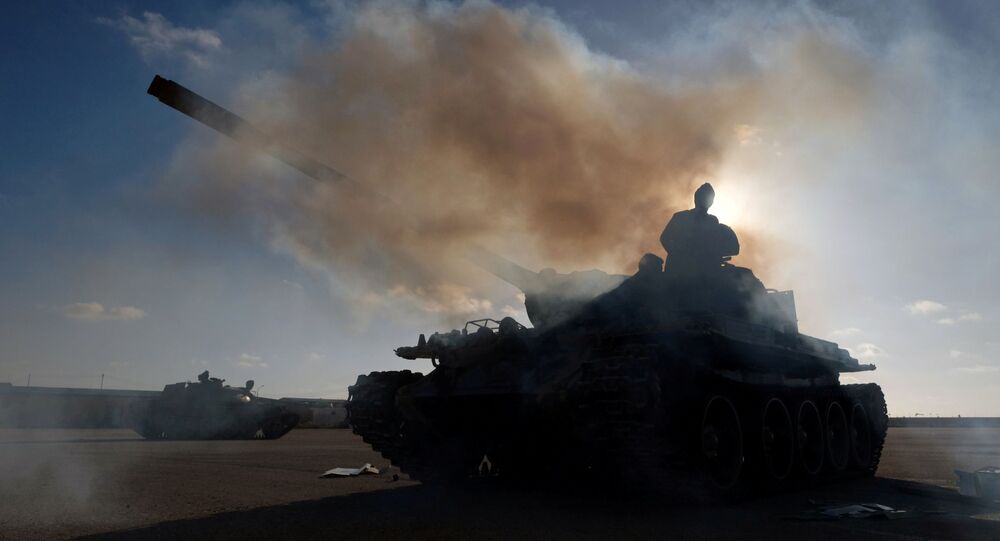 Libyan National Army Field Marshal Khalifa Haftar on Monday announced a withdrawal from the political agreement that led to the formation of the Government of National Accord (GNA). He said the country was coming under the control of the army. Meanwhile, the GNA has called on members of parliament in the east of the country to back it.

As Field Marshal Khalifa Haftar announced that the Libyan National Army (LNA) was quitting the Skhirat Agreement that led to the formation of the UN-backed Government of National Accord (GNA), Sputnik spoke with Libyan experts, who have offered their views on potential future scenarios for the war-torn country.

Chairman of the Defence and National Security Committee of the Libyan House of Representatives (HoR) Talal Al-Mihoub said that he fully supported Haftar's decision.

“I strongly support the withdrawal from the Skhirat Agreement. The army is capable of kicking the terrorists out of the country and bringing order to political life much quicker and more effectively. The GNA has never been able to get out of chaos. Parliament is indeed better off resigning and supporting the initiative. It is imperative to change something urgently, otherwise, the anarchy will not stop”, he said.

Othman Baraka, who is head of the Saif al-Islam's Popular Front for the Liberation of Libya (PFFL), believes that Khalifa Haftar's move was quite successful, as it will ultimately lead to constitutional elections under the auspices of the UN.

“The freezing of the Skhirat Agreement has contributed to the disbanding of the Government of National Accord. This means the main problematic issue will finally be resolved: it will be possible to hold all-Libyan parliamentary elections under UN supervision. The tragedy is that this government can't even resolve internal disputes, so Haftar did the right thing”, he said.

According to Baraka, however, there is a risk that the situation could seriously deteriorate.

“First of all, given the current situation, Tripoli's parliament may incorporate such forces, which in the end will only contribute to the processes of the division of the country. Secondly, the army still cannot impose control over the western part of the country, and that too threatens to perpetuate the division”, the politician said.

Position in the Upper echelons

Member of the High Council of State (HCS) Mohammad Muazab believes that Haftar's statements on the transfer of power in the country to the army are not surprising.

“Everyone knows how Haftar has longed for power since the fall of the Gaddafi regime. He has repeatedly said that the 'only difference between him and Gaddafi was that he was better than him'. Therefore, his actions are not surprising in general”, the HCS member said.

He also noted that Haftar “was hopelessly stuck in the 70s, when it was possible to gain power in this manner. But now, in the era of social networks, it is not going to work that way”.

Muazab added that Marshal Haftar would only lose his popularity among Libyans with his demarche. He felt that in this way, the LNA was trying to distract attention from its own failures near Tripoli. However, this illusion of Haftar's total superiority would only make things worse for everyone, pushing the country into even greater chaos.

© REUTERS / Esam Omran Al-Fetori
Russian FM Source Says Moscow 'Surprised' at Haftar's Claims of LNA's Control Over Libya
In turn, Government of National Accord Foreign Affairs Representative Mohammad al-Kiblawi said that it was virtually impossible to abandon the Skhirat Agreement because it was the basis for the entire system of solving the Libyan crisis.

“The provisions of the Skhirat Agreement were included in the constitutional declaration, which was supported by an overwhelming majority of Libyans. To freeze it unilaterally and declare the supremacy of the army is simply criminal. We have guaranteed our people the removal of the military and totalitarian regime forever”, the diplomat said.

Commenting on the legitimacy of such a decision, al-Kiblawi noted that Haftar opposed even the political bodies supporting him: “They once appointed him. Thus, his actions have no legitimacy”.