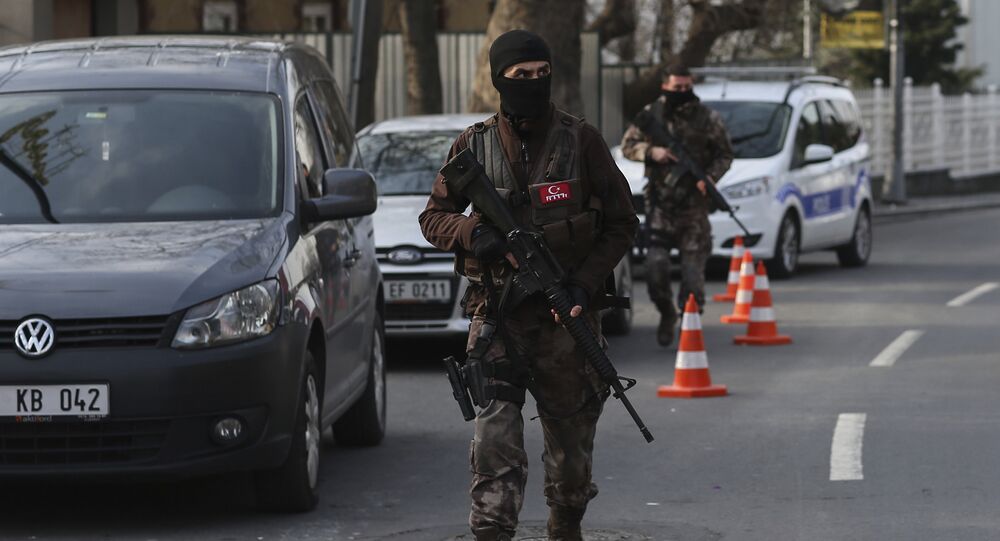 Turkish forces operating in northwest Syria got in a shooting war with Syrian government troops this week after the shelling of a Turkish observation post in Idlib province. Syrian forces began an operation to liberate the militant-controlled province late last year after repeated violations of a regional ceasefire.

According to the news agency's sources, armoured transports containing special forces troops were sent to Idlib through Reyhanli, a city near the border with Syria in Turkey's Hatay province.

The Turkish military has also reportedly deployed multiple launch rocket artillery systems on the border with the Arab Republic.

Later Thursday, Turkish Defence Minister Hulusi Akar confirmed that reinforcements were being deployed to Idlib to "ensure the ceasefire," and warned that the military would use force against anyone who violates the ceasefire, including unspecified 'radical' groups.

Moscow: Syrian Troops Fighting Terrorists on Their Own Territory

Commenting on the situation in Idlib on Thursday, Kremlin spokesman Dmitry Peskov stressed that Damascus had every right to engage in anti-terrorist operations on its own territory.

"This is a matter of fulfilling the Sochi Accords and the obligations that the parties assumed in accordance with this document. Also, perhaps first and foremost, we're talking about the fight against terrorism that the Syrian Armed Forces are waging on the territory of their country," Peskov said, answering a reporter's question on a possible US intervention in the Syria conflict.

On February 3, five Turkish troops were killed and five more injured in clashes with the Syrian Army, with Turkey responding by attacking Syrian army positions in the region. On Tuesday, the Turkish Defence Ministry claimed that dozens of Syrian troops, two tanks, an anti-aircraft installation and a munitions were destroyed. On Thursday, the Turkish military reported that it had 'neutralized' 55 more Syrian servicemen.

Idlib is one of four de-escalation zones created in Syria through the joint efforts of Russia, Iran and Turkey in 2017. The region is believed to contain tens of thousands of terrorist militants, as well as hundreds of thousands of civilians. Late last year, the Syrian Army began an operation in the region after repeated attacks on Syrian military positions by militants claimed the lives of dozens of servicemen.