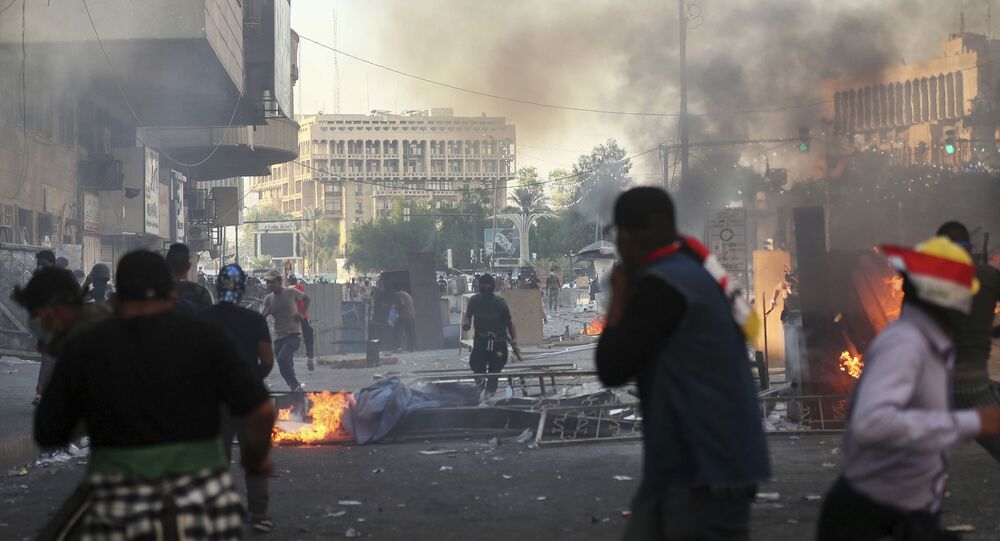 MOSCOW (Sputnik) - At least two people have died and 18 others were injured after a tent camp used by protesters in the southern Iraqi city of Nasiriyah was set on fire, the Iraqi Al-Sumaria TV channel reported.

According to the news outlet, citing a source in the security forces, unknown assailants attacked the protesters in Nasiriyah on the morning of 27 January and set fire to their camp.

The Iraqi human rights commission on 26 January pronounced 12 people dead and 230 injured in the recent clashes between protesters and the security forces in the southern provinces of Dhi Qar, where Nasiriyah is located, and Baghdad.

Screenshot/Steven Nabil
Videos: Anti-Government Protesters Set Fire to Iranian Consulate in Iraq
The protests in Iraq have been ongoing since October 2019, with the participants demanding the ouster of the government, as well as economic reforms, better living conditions, social welfare and an end to corruption. The rallies led to Prime Minister Adel Abdul Mahdi's decision to resign last November. However, he remains in office in a caretaker capacity until a replacement is found. Salih submitted his resignation last December.

The demonstrations and the ensuing civil unrest have led to the deaths of more than 600 people, according to official estimations.