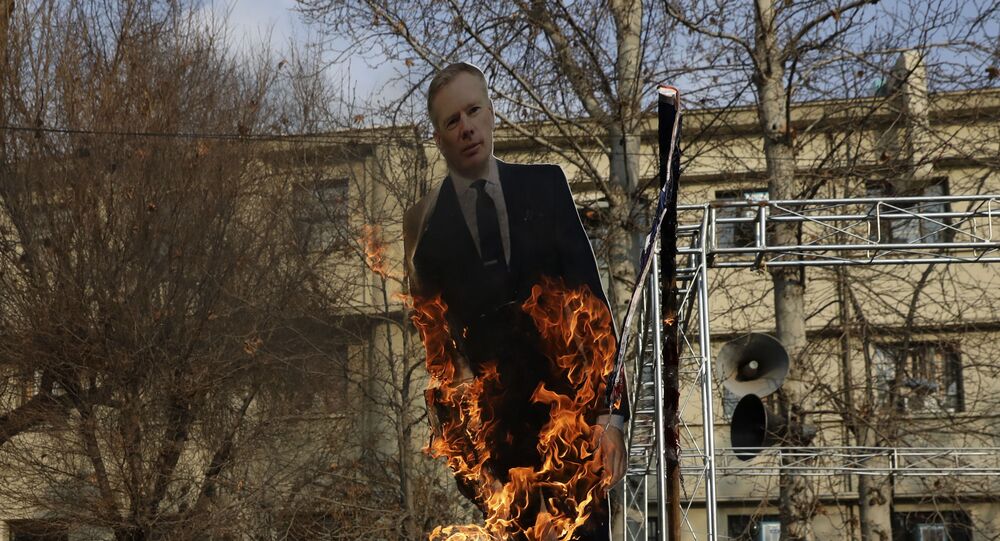 UK envoy to Iran Robert Macaire was detained days ago due to his alleged participation in unsanctioned protests in Tehran over the downing of a Ukrainian Boeing 737, but was released 15 minutes later. The ambassador claims that he only briefly visited the rally, with London criticising his detention as a "flagrant violation of international law".

A member of Iran's Islamic Consultative Assembly, Mousavi Largani, has called on the country's Foreign Ministry to react to the recent incident involving British Ambassador to Iran Robert Macaire and expel him from the country over his alleged attempts to meddle in the country's domestic affairs.

Largani also called on the government to consider downgrading Iran’s ties with London.

"Of course, we can reduce the level of our engagement with the UK and downgrade our relationship with the country to a consular level", the Iranian lawmaker said.

The member of the Iranian parliament said that Macaire's alleged participation in the 11 January protests was not the first time that he had been spotted trying to meddle in Iran's affairs. He insisted that the envoy had gathered other ambassadors from European states in order to discuss how to "drag" Iranians to the streets to participate in the fuel price protests that erupted in the Islamic Republic in November 2019.

Macaire was arrested by Iranian authorities on 11 January over his alleged participation at an illegal gathering in Tehran, but he was released 15 minutes after his identity was confirmed.

The envoy himself claims that he only paid homage at a vigil for the victims of the Ukrainian Boeing 737 crash in Tehran and that he left the site after five minutes, when the people around him started chanting. The UK condemned its ambassador's brief detention as a violation of the Vienna Convention on Diplomatic Relations.

The chants later morphed into anti-government protests as Iran confirmed that its air defences had mistakenly identified the jet as a missile approaching a sensitive military installation and downed it. The incident took place on the same day as the Islamic Republic carried out retaliatory strikes against the US for killing its General Qasem Soleimani, with all of its defences going on high alert in case of a possible American response. Tehran has vowed to identify those responsible for the mistake and punish them.