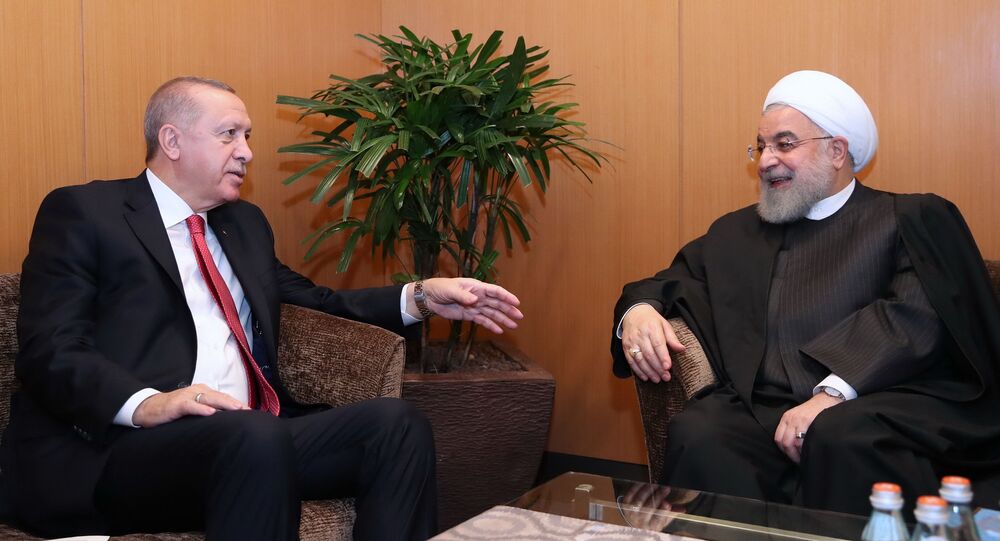 Rouhani Wants Tehran, Ankara to Cooperate With Damascus to Tackle Terrorists in Idlib

On Tuesday, the Al-Watan newspaper quoted a military source as saying that the Syrian Army may start a large-scale military operation in the north-western province of Idlib which remains one of the last terrorist strongholds in the Arab country.

Iranian President Hassan Rouhani has called for the situation in Syria’s Idlib province to be resolved during discussions between Tehran, Damascus and Ankara.

Rouhani made the statement after his meeting with Turkish counterpart Recep Tayyip Erdogan on the sidelines of the 2019 Kuala Lumpur Summit on Thursday.

“[…] Rouhani called for more cooperation of Iran and Turkey with the Syrian government. He also went on to call for cooperation with Damascus in the attempt to drive terrorist groups out of Idlib and promote peace in the country”, according to a press release published on the Iranian President’s website.

The Erdogan-Rouhani talks came after the Syrian newspaper Al-Watan cited a military source as saying that the country’s military is pulling reinforcements into the country's northwestern province of Idlib and might start a large-scale offensive there to drive terrorists out of the area.

Idlib Should Be Freed From Terrorists

This was preceded by Russian Foreign Minister Sergei Lavrov stating last week that Idlib had been taken over by the Jabhat al-Nusra* but that eventually it has to be completely liberated from terrorists and returned under the country’s government control.

The terrorist group, Lavrov added, took control of the zone and attacked Syrian troops, civilian infrastructure and Russia's Hmeymim airbase. Russian and Syrian forces responded to each of the attacks, but, Lavrov added, it is impossible to endlessly maintain the status quo.

Separately, he added that Turkey is still unable to separate opposition fighters from terrorists in Syria’s Idlib despite having promised to do so.

In September 2018, Russian President Vladimir Putin and Turkish President Recep Tayyip Erdogan agreed to set up a demilitarised zone in Idlib along the contact line between the armed opposition and government forces during talks in the Russian resort city of Sochi. The withdrawal of heavy weaponry operated by militants is also part of the agreement.

Russia, alongside Turkey and Iran, remains a guarantor of the ceasefire in Syria. Russia regularly carries out humanitarian operations across the country and helps Damascus in providing safe passage for the return of Syrian refugees.

*Jabhat al-Nusra, a terrorist group banned in Russia and a number of other countries