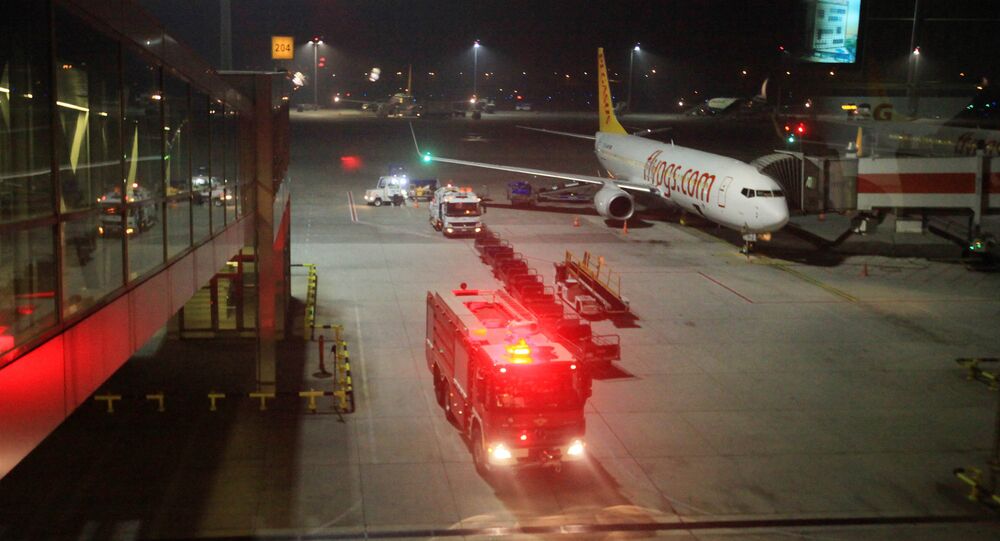 Panic On Board as Veiled Woman Waves Koran, Threatens to Blow Up Plane in Istanbul Airport - Reports

A flight from Istanbul to Tymbou in northern Cyprus was reportedly cancelled over a terror scare prompted by one of the passengers. The woman, who wore sunglasses and covered her face with a veil, claimed to be a member of FETO – the Fethullah Terrorist Organisation, linked to US-based Muslim cleric Fethullah Gulen by the Turkish government.

A woman claiming to be a terrorist and threatened to blow up an aircraft in Istanbul's Sabiha Gokcen airport was surrounded and restrained by fellow passengers.

The Turkish newspaper Hurriyet reports that the woman, wearing a face veil and dark glasses, started shouting and waving a Koran before take-off, right when the plane, destined for Tymbou in northern Cyprus from Istanbul, was on the runway.

“I am a Feto member, and I will blow up the aircraft”, she reportedly shouted in Turkish, referring to the Fethullah Terrorist Organisation, accused of orchestrating the 2016 coup attempt and linked to US-based Muslim cleric Fethullah Gulen by the Turkish government.

Before security arrived and escorted her off the plane, she is said to have had a row with other travellers and lit cigarettes. Although she allegedly claimed that she had five bombs, nothing was found on board.

A woman claiming to be a terrorist on a Cyprus-bound flight from Istanbul was detained on Wednesday by Turkish police.Waving around what seemed to be the Muslim holy book, the Quran, Nikar D. at #Istanbul's Sabiha Gökçen Airport, and threatened to blow up the aircraft.#Turkey
📸 pic.twitter.com/WePma5sI91

​While the Cyprus Mail reports that the flight was cancelled, some reports suggested that it took off late. Following the unrest, some passengers are said to have returned to the tarmac.

© REUTERS / Kevin Lamarque
Erdogan Blames Washington for US-Turkey Visa Dispute, Hints at FETO Trace
According to the Turkish government, FETO is comprised of followers of Fethullah Gulen, a former political ally of President Recep Tayyip Erdogan, who currently resides in the United States. However, he denies these claims, insisting that his movement is peaceful. Turkey has demanded Gulen’s extradition for a number of years.

Ankara accuses the organisation of orchestrating the 2016 coup attempt that left 251 people killed and nearly 2,200 injured. Since then, over 50,000 citizens have been arrested, including state and military personnel, civil activists, journalists, and teachers. Tens of thousands more citizens accused of having ties with FETO have been dismissed or suspended.