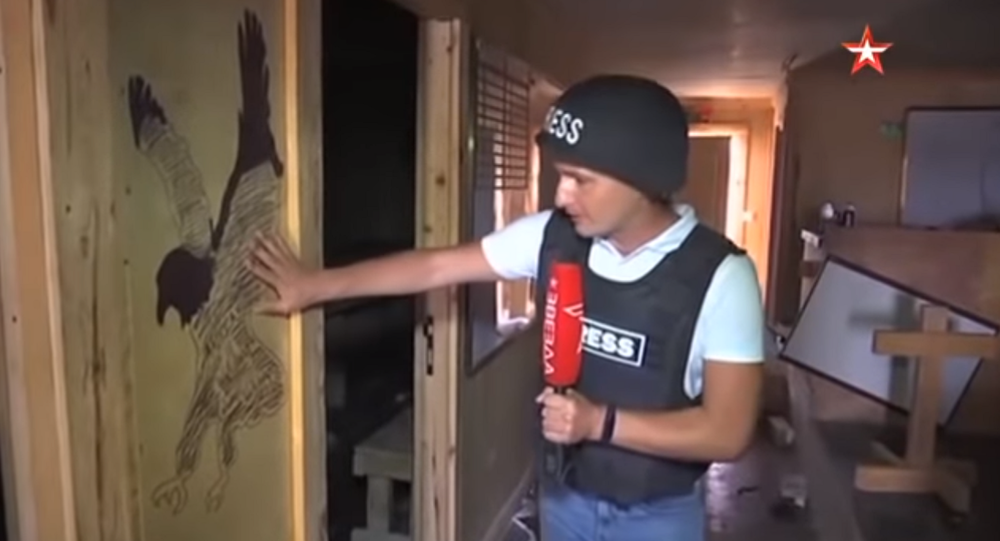 This week, Russian peacekeeping forces were spotted operating in the city of Manbij, a key population centre about 25 km from the Syrian-Turkish border, with their deployment said to be aimed at preventing conflict between Syrian and Turkish forces in the region.

Russian journalists accompanied a Russian military patrol as it visited an abandoned US base outside Manbij, Syria providing unique footage showing what American troops left behind during their hasty retreat from the area earlier this month.

The journalists included a correspondent from Zvezda, the official television channel of Russia’s Defence Ministry. The correspondent gave a tour of what remains of the base, which was built about three years ago, and is situated about 7 km outside the town of Manbij itself.

Along with an estimated 300 US servicemen, the base housed about 15 vehicles, which US forces used to patrol the area.

“It appears that US forces managed to evacuate only their weapons, ammunition and vehicles; they weren’t even able to set fire to the base. However, it seems they understood perfectly well who would come to replace them. Across the base one finds messages for Russians,” the correspondent explained, pointing to a makeshift drawing of a bald eagle with the phrase “America is watching – always watching” written on its feathers. Separately, he pointed to a book with the message “With love from the US Army” written into its cover.

Zvezda’s reporters weren’t the only ones to make it into the base, with News-Front posting another video featuring several more of the so-called “messages to Russians” mentioned by the outlet, including a whiteboard with the message “WE LOVE USA, heart, Russia @realDONALDTRUMP” and “#TheComrades” and a separate whiteboard proclaiming that American Nike was better than Adidas (the German clothing brand preferred by Russians, according to US pop culture) and that whiskey was superior to vodka.

At about 9:50 into the video the correspondent discovers a notebook with the phrase “I expect Nothing from this deployment, and I’m still let down,” in the cover.

The videos also showed other areas of the base, including a soundproof room believed to have been the base’s command centre, the canteen, laundry room, barracks, and more.

According to the Syrian Army, which now controls the facility, most of the equipment left behind by the US is in working order. The military said a second US base about 9.5 km to the north near the settlement of Dadat has also been placed under Syrian military control.

Earlier this week, a senior state department official informed Reuters that US troops had completed their withdrawal from Manbij, but added that the US retains control over airspace in northeastern Syria. US troops began withdrawing from northern Syria in early October, with Turkey kicking off a military campaign in northern Syria on October 9 targeting Syrian Kurdish forces, the US’s erstwhile allies.

Turkey received criticism from the US and other NATO allies over the operation, while Syria has demanded the immediate withdrawal of all forces illegally present in the country. Turkey’s operation prompted the local Kurdish forces in de facto control over much of northern Syria to pen an agreement with Damascus allowing Syrian Army troops to take up positions along the entire length of the Syrian-Turkish border to prevent a Turkish assault. On Thursday, US Vice President Mike Pence and Secretary of State Mike Pompeo flew to Ankara to discuss Turkey's operation with President Recep Tayyip Erdogan, with the US and Turkey hammering out a 120 hour ceasefire.

Turkish Ceasefire in Northern Syria: US Solves Another Problem That It Created