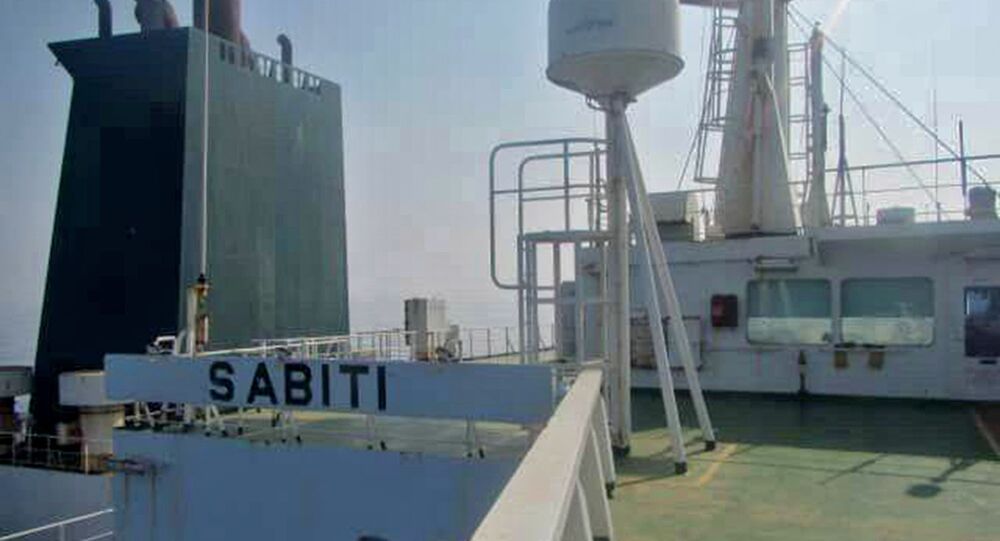 The initial reports of an Iranian tanker being struck by two missiles claimed that they came from Saudi Arabia. However, the National Iranian Oil Company (NIOC) that owns the vessel later dismissed those claims.

Saudi Arabia's Foreign Minister Adel al-Jubeir, answering journalists’ questions on 13 October, dismissed the allegation that Riyadh could have attacked the Iranian oil tanker Sabiti in response to attacks on Saudi Aramco facilities in September, attributed by the US and Saudi Arabia to Iran.

Al-Jubeir said that while Riyadh had indeed blamed Iran since it believes the drones were made in the Islamic Republic, it will not respond in kind. The minister added that the investigation into the Saudi Aramco attacks is still ongoing and the drone launch site has not been determined yet.

The foreign minister also indicated that the story about the attack on the Iranian tanker is imbued with conflicting reports concerning the incident and hence it's too early to "jump to conclusions".

Iranian media reported on 9 October that an explosion had set the National Iranian Oil Company's tanker on fire 100 kilometres from the Saudi port city of Jeddah, suggesting it was a missile attack by the Saudis. NIOC, the company that owns the vessel, later dismissed the claims that it had been a Saudi missile attack, but confirmed that the ship sustained damage.

Following the incident, Iranian government spokesman Ali Rabiei said that Tehran would give an "appropriate response" to the attack on the tanker, but first it would investigate who was behind the incident.

When asked by reporters if Russia could play a role in easing the tensions between Saudi Arabia and Iran, Foreign Minister Adel al-Jubeir stated that Riyadh's problem with Iran is its behaviour as a country and that unless it changes this behaviour, no normal relations between the two are possible.

The minister further argued that Riyadh is not alone in viewing Iran in such a light and that therefore the Islamic Republic is facing international sanctions and not just "Saudi sanctions".

Riyadh has long accused Iran of allegedly trying to meddle in its domestic affairs and of supplying weapons to its enemies, namely Yemen’s Houthis, who have been launching attacks against Saudi Arabia for the last three years. Tehran, however, vehemently denies the accusations and has called for the establishment of normal relations between all Gulf States, including Saudi Arabia.

'Attacks on Saudi Aramco Facilities are Attacks on Entire World'

Al-Jubeir refused to give details on how Riyadh plans to prevent future strikes on its oil facilities, but assured that such measures are being taken. He also stressed that the September attack on Saudi Aramco refineries was not simply an attack on the Saudi energy industry, as it affected the entire planet.

"The attack against Abqaiq and Khurais was not an attack against Saudi Arabia, it was attack against the whole world. Every human being on this planet was impacted by this attack and could have been attacked more had Aramco not responded so efficiently, so quickly in order to minimise the damage and minimise the disruption of the supply of energy", he said.

On Turkish Ops in Northern Syria and US Withdrawal

Commenting on the situation in northern Syria, the foreign minister reiterated Saudi Arabia and the Arab League's earlier condemnations of the Turkish military operation there and called on the international community to ensure it won't last.

Commenting separately on Washington's decision to withdraw from northern Syria, leaving its Kurdish allies to fight Turkey on their own, Adel al-Jubeir said he believes that the US is continuing to work with the Kurds despite the pullback. At the same time, he added that he is not in a position to suggest to the US what steps would be more appropriate in such a situation.