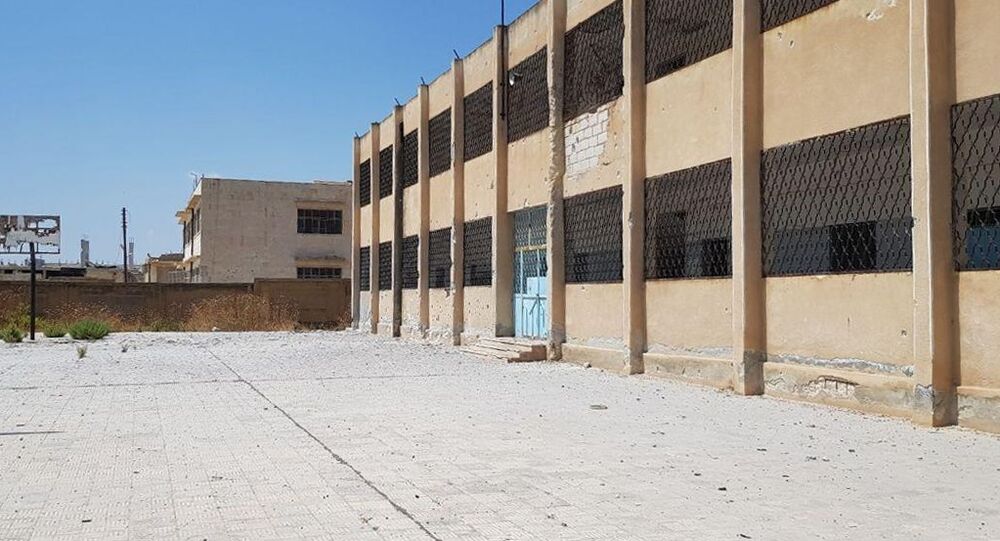 KHAN SHEIKHOUN, Syria (Sputnik): On Friday, the Syrian military announced that they had regained control over Khan Sheikhoun. Controlled by militants since 2014, the town has been practically destroyed.

Syrian authorities have started rebuilding infrastructure in the recently liberated town of Khan Sheikhoun, Idlib Province, with a group of foreign journalists having come to look at what had been a strategic stronghold of terrorists since 2014.

Foreign journalists, including those from Bulgaria, Greece, Italy and Russia, had the opportunity to look at how life is going in the liberated town. Italian correspondent Gian Michalisin noted that it was a strategically important task to clear Khan Sheikhoun of terrorists, recalling that 2,500 foreign militants had been operating here.

On Monday, the Russian military delivered humanitarian aid to the town.

"You can see the mosque that was the first to be put in order. Civilians have returned to neighbouring houses. Electrification is already underway, and this work has been going on for three days, since the city was liberated from militants", Maj. Gen. Ravil Muginov of the Russian Centre for Syrian Reconciliation said.

According to Muginov, the local administration is doing its best to return a sense of nomalcy to the town.

"When we were on our way [to the town], we saw that the roads have been patched, asphalt put down, they are trying to clean everything up. Of course, there is still a lot to be done, but the Centre for Reconciliation of Opposing Sides will also be doing everything possible", he added.

According to Idlib Governor Muhammad Fadi Sadun, over the past three days, a road to one of the local schools has been rebuilt. The building itself is being repaired to open on 1 September.

"It is very painful to see all this destruction that happened to Khan Sheikhoun. Before the war, it was a very beautiful town, people lived a good, wealthy life. Thank God, now it is liberated, and we will try to do everything to make it as soon as possible the same as before, so that people live peacefully and children go to school", he said.

According to the governor, the provincial authorities have set a goal of facilitating the return of local residents. To do this, first of all, the town needs to restore electricity and water supply.

The Syrian Army regained control over the city of Khan Sheikhoun, located in Idlib Province in the northwest of the country, last week.

In early August, a long-discussed truce entered into force in Idlib. The Syrian military said it would resume its military operation in northwestern Syria if Ankara failed to implement its obligations under a Turkey-Russia agreement reached in Sochi last September. Three days later, on 5 August, Syrian government forces resumed the operation due to the militants' non-compliance with the ceasefire agreement brokered by Russia and Turkey.