The visit is widely viewed as a “take that” move towards US President Donald Trump, who visited Iraq last year.

Iranian President Hassan Rouhani has arrived in Iraq on his first visit to the country in the six years since his election, the Washington Post reported Monday.

The president met with his Iraqi counterpart, Barham Salih, shortly after arriving in Baghdad on Monday. Following brief negotiations, the two leaders held a joint press conference saying several framework agreements had been reached, which would be unveiled later.

"Strengthening ties between Tehran and Baghdad works to the benefit of both countries, and we won't let this positive path towards progress slow down to a halt," Rouhani said at the conference. "We want to forge very close relations with Iraq. We do not seek to be allied against others, but rather seek to invite other regional states to our alliance as well."

"We need to get past trivial details in mutual relations and think about the bigger and broader space for cooperation and ties because this would best serve the interests of both countries," Salih added, according to PressTV.

Message of this visit is that No bureaucracy & third country can affect amicable &brotherly relations between Iran & Iraq:#Iran's President,Rouhani.

We will never forget Iran's brotherly backing of Iraqi Ppl in hard days.We will stand by Ppl of Iran as well:#Iraq's Pre.,Salih. pic.twitter.com/us8RXK6lpQ

​Rouhani's three-day visit will also include meetings with Prime Minister Adil Abdul-Mahdi and Parliament Speaker Mohammed al-Halbusi, as well as with a number of prominent lawmakers. He will also make stops at Shia holy sites and meet top Iraqi Shia cleric Grand Ayatollah Ali al-Sistani, the PressTV report says. Both Iraq and Iran are Shiite-majority countries. 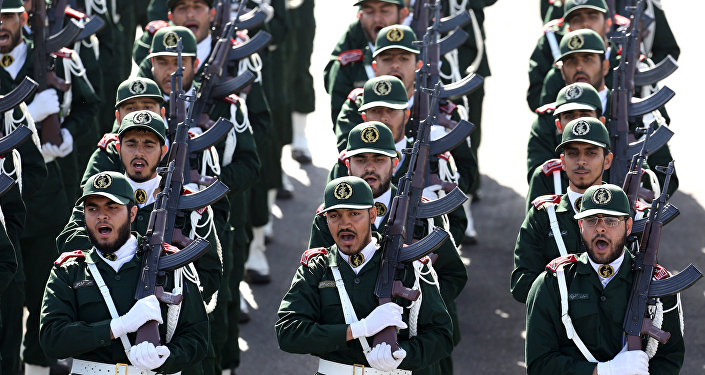 © AP Photo / Ebrahim Noroozi
Iran's Rouhani Urges Pakistan to Crush Terrorists ‘Whose Source of Financing and Arms are Known’
Rouhani's visit has been widely compared to the one by Trump earlier in December, when 45 arrived at a US military base in Iraq in the middle of the night and was not greeted by any Iraqi officials. Back in December, Rouhani asserted that flying into Iraq under the cover of darkness meant "defeat" for the US in the country and asked the US president why he did not opt for an "open and official visit" instead.

The unannounced visit angered both Iraqi officials and other Middle Eastern leaders, who said Trump visited Iraq like he would a US state, showing disregard for the nation's sovereignty.

By comparison, Rouhani landed in broad daylight and was received by high-ranking authorities, PressTV reports.

"I feel like I am in my second homeland," Rouhani said. "We have had deep relations for thousands of years — religious, historical, cultural — and we are not planning to let that go."

​Many observers note that Rouhani's visit underscores Washington's failure to drive a wedge between the two neighboring nations.

© Flickr / Day Donaldson
US Commanders Once Again Warn Syria, Iraq at Risk of Daesh Resurgence
On Sunday, Salih said Baghdad would not abide by US-imposed sanctions against Tehran, even though such a decision will definitely have consequences.

"Let me tell you that Iraq will not become part of the US unilateral sanctions regime against Iran. There is no doubt that we will be affected by these sanctions, but it is certain that we will not be part of them," he said. "Iraq insists that the interests of our friendly and neighboring country must be met. We will do our best to reduce tensions in this regard and decrease the damage that will be done to the Iranian nation."

Iran is currently Iraq's top trade partner, with an annual turnover of about $13 billion, which they hope to increase to $20 billion. Iraq also relies on its eastern neighbor for electricity, military assistance in its battle against terrorism and more, the Washington Post reports. Besides that, tourism between the two countries amounts to some $5 billion annually.

"Iraq is an important Islamic and Arab country and has a major role in the region," Rouhani said Monday, according to the Washington Post.

Trump's Comments on Watching Iran from Iraq ‘Humiliating' for Baghdad