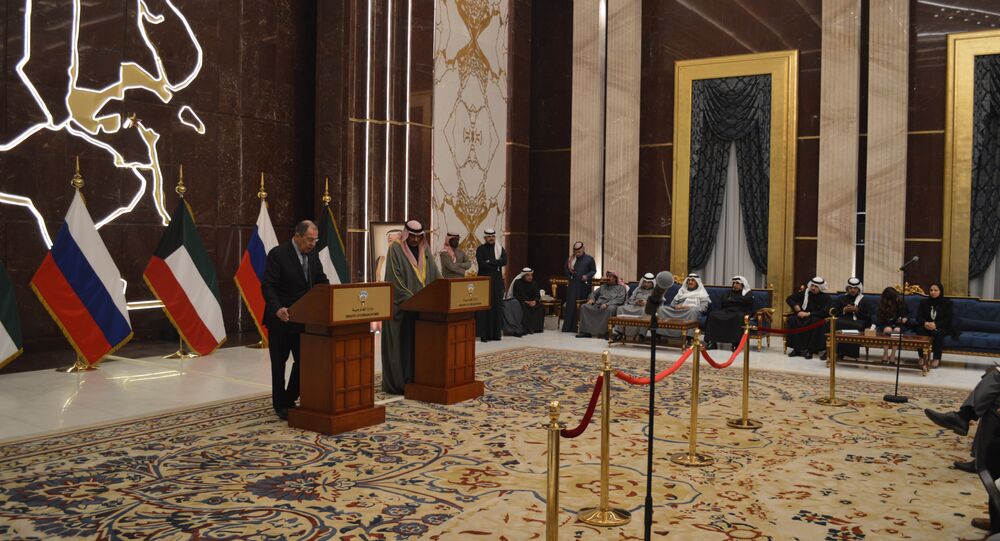 Syria’s Return to Arab League Not a Taboo, Brought up During Lavrov’s Gulf Tour

Sergey Lavrov’s plane made four stops in Gulf nations this week. It takes about an hour to travel from one location to another, but each country that Russia’s top diplomat visited has unique history and traditions.

​Moscow has big plans for cooperation with Gulf states. According to Sergey Lavrov, in Kuwait alone, Russian Direct Investment Fund in cooperation with Kuwait’s investment agency are working on several dozen projects with a total worth close to two hundred million dollars. Russian companies, such as giants Gazporm, Novatek and Zarubezhneft also have joint projects with local partners.

According to Sergey Lavrov, military cooperation with Kuwait is another important joint venture:

“Kuwait takes part in the annual “Army” military and technical forum, and participates in “Tank biathlon” organized by Russia’s defense ministry. It helps to establish contacts between people, when they take part in these “sports battles”.

When it comes to real battles, such as the fight against terrorism in Syria, Kuwait and other Gulf nations seem to have varying approaches.

Syria was mentioned on many occasions during Lavrov’s Gulf tour, and virtually everywhere journalists were asking the same question: what’s the view of each country on the possibility of Damascus re-joining the Arab League.

Foreign Minister of Kuwait Sabah Al Khalid Al Sabah, when asked about the matter, was quite optimistic:

“We are calling for Syria’s return to normal life, for Syria’s return into the Arab family. We will be welcoming that and we will be happy if it happens. We welcome Syrians’ participation in political process, in solving the problems which are present, in overcoming the chaos of the past 8 years in their country. Syria plays key role in the region when it comes to security and stability.”

​In the United Arab Emirates, which was the last stop on Lavrov’s Gulf trip itinerary, the issue of Syria’s return to the Arab League was raised at the press conference, this time by local media.

It appears that that UAE sees this process from its own perspective. According to UAE’s Minister of Foreign Affairs and International cooperation Sheikh Abdullah bin Zayed Al Nahyan, the country is taking steps to resume dialogue with Damascus, with re-opening of the embassy in an attempt to counter the growing influence of Tehran and Ankara in the war-torn country.

“We in UAE aim for the increase of the Arab countries’ role on the Syrian track. It has to be a political role, a role in restoring security and stability. There is no doubt – we didn’t like Damascus’ domestic policies. But today we see the growing influence of Turkey and Iran, and the absence of the Arab nations’ role. We feel that such situation is unacceptable, so, together with our Russian and other colleagues we look for ways to overcome the crisis, to make steps forward, and to make Syria a part of the Arab family, a part of the region.”

Syria was one of the founding members of the Arab League – a regional club currently comprised of 21 nations with a total combined GDP of $6.48 billion. In 2011 Syria’s membership in the League was revoked.

Besides Kuwait and the UAE, Russian foreign minister Sergey Lavrov, who embarked in a 4-day Gulf tour on Sunday, also visited Saudi Arabia and Qatar.