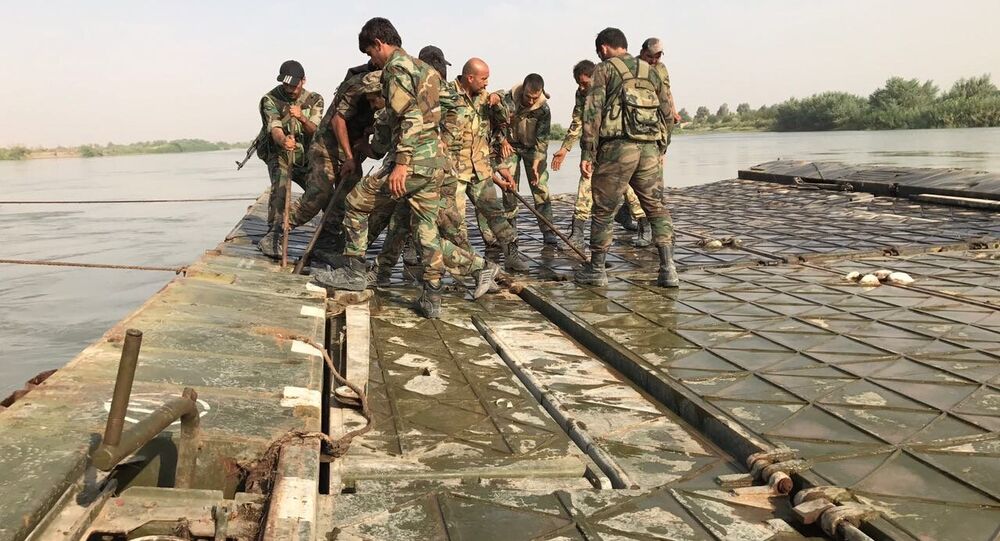 Turkish President Recep Tayyip Erdogan announced in December that Ankara was ready to launch a military operation against Kurdish fighters on the eastern bank of the Euphrates River as well as in Syria's Manbij, located near the Turkish border, if the United States did not remove the militia from there.

Moscow hopes that Damascus and the Kurds will manage to find a solution regarding the eastern bank of the Euphrates that would guarantee Syria's sovereignty and territorial integrity, Russian Ambassador to Damascus Alexander Yefimov told Sputnik in an interview.

"In connection with [US prospective withdrawal from Syria], we hope that Damascus will manage to find an acceptable solution on the issue of restoring Syria's sovereignty over the eastern bank of the Euphrates during contacts with the Kurds and take into consideration interests of all local ethnic groups", the diplomat said.

Alexander Yefimov continued by saying that Russia believes that Syria should return to the Arab League as soon as possible.

"It is obvious that Syria's return to 'the Arab family' will have a broader positive influence in the context of international efforts on settling the Syrian crisis. That's why we speak for Syria returning to the Arab League as soon as possible", the diplomat stressed.

He has also mentioned that Moscow has not seen progress in the United States implementing its decision to withdraw troops from Syria.

"Time will tell how this decision will be implemented in practice. So far, we do not see serious steps on the US part in connection with this", the diplomat said, adding that there is strong opposition in Washington to US President Donald Trump's decision to disengage from Syria.

© AP Photo / Syrian Democratic Forces
US Urges Allies to Take Back Daesh Terrorists Captured by Kurds in Syria
The statements come after Kurdish militia units in January blocked a convoy of humanitarian aid sent by the Syrian authorities to the city of Hajin located on the eastern bank of the Euphrates River, forcing the vehicles to turn around.

Earlier in January, the Turkish Defence Minister stated that the country's military had completed their preparations for a military operation in the northern Syrian city of Manbij, and east of the Euphrates River.

The Turkish offensive against Kurdish militias was postponed in January after Erdogan's conversation with Trump, which ended in a plan to create a 30-kilometre (18-mile) buffer zone in Syria. Turkey has been opposing the presence of Kurdish militia in the north of Syria, claiming that the militants posed a threat to the country's security.