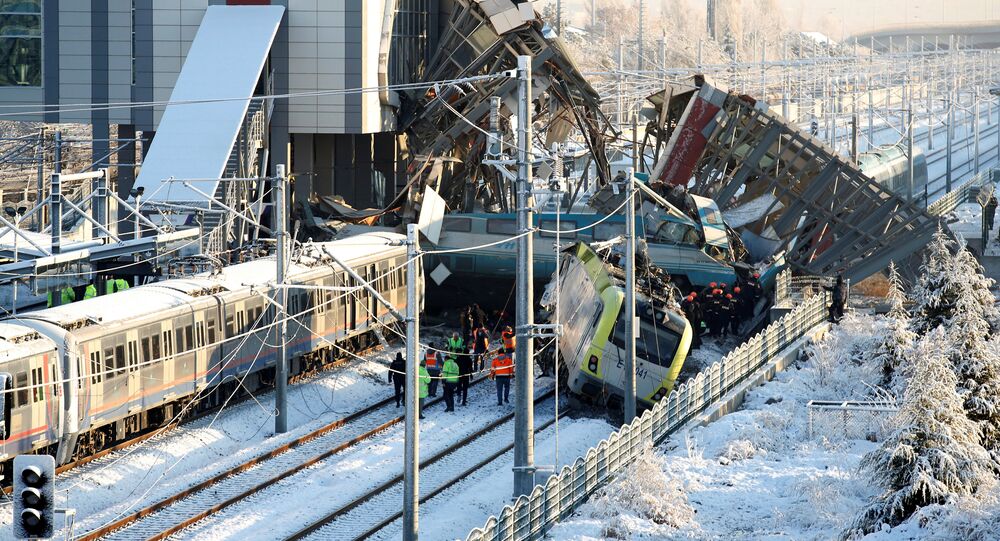 According to the Ankara administration, a crash, in which two railcars derailed, had been caused by the high-speed train's collision with a suburban passenger train.

The death toll in the high-speed train crash in the Turkish capital of Ankara has increased to nine, while 46 people were injured, Turkish Minister of Transport Mehmet Cahit Turhan told reporters.

"A total of seven people died as a result of the crash, including the driver. A total of 46 people were injured, and the condition of three of them has been assessed as grave", the Ankara administration said in a statement earlier.

Earlier in the day, Ankara Governor Vasip Sahin said that four people had been killed and 43 others had been injured.

"The train collided with a shunting locomotive that should not have been on that rail track. A total of four people were killed and 43 others were injured. These figures will be defined more precisely later. All the rescue teams are operating, and investigation into the incident is underway", Ankara Governor Vasip Sahin said.

The high-speed train crash in the Turkish capital of Ankara was caused by a collision with a shunting locomotive, the Turkish Transport Ministry said in a statement.

The train collided with a shunting locomotive that should not have been on that rail track", the statement read.

Ambulance cars are reportedly arriving at the site of the crash.

High-speed train traffic from Ankara on all routes has been suspended after a deadly train crash that happened earlier in the day, a representative from the Turkish State Railways told Sputnik.

Earlier on Thursday, Turkish media reported about the crash of a train from Ankara to Konya.