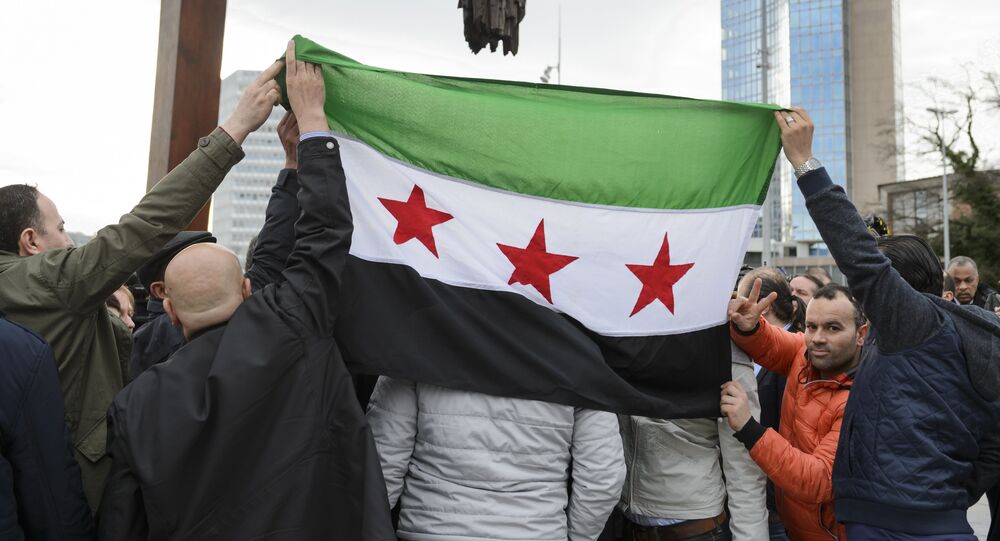 Besieged in the Idlib province, the Syrian opposition, interlaced deeply with the former Nusra Front, has undergone another rebranding, changing its flag to bear a Shahada religious inscription.

As the operation against terrorists in Syria comes close to its end, terrorists besieged in the Idlib province have undergone another rebranding, this time changing their flag.

The so-called "Syrian Revolution Flag" — a green, white and black tricolor with three red stars, adopted back in 2012 — became a unifying symbol for a large variety of smaller terrorist and opposition movements (Daesh excluded) that fought against the elected government of President Bashar Assad throughout the entire Syrian war.

In 2015, the flag saw a new wave of popularity as the Syrian opposition sought to distance itself from Daesh and other radical jihadists.

"The opposition flag remained a point of contention between the opposition's so-called "revolutionary" and more hardline Islamist wings for years," War on the Rocks author Sam Heller wrote in October.

© AFP 2021 / DELIL SOULEIMAN
US-Led Coalition Probing Reports About Strikes in Syria That Killed Civilians
However, according to Séamus Malekafzali, a writer at the International Review focusing on Middle Eastern affairs and the war in Syria, the so-called General Syrian Conference, has now adopted a new version of the flag, in which stars have been replaced by a red-inked Shahada, an Islamic symbol of faith.

"The General Syrian Conference of the #HTS-backed Syrian Salvation Government has come to a compromise resolution regarding the flying of the Syrian revolution flag," Malekafzali tweeted, referring to Hayat Tahrir as-Sham, a rebranded Nusra Front, an internationally recognized terrorist organization.

The General Syrian Conference of the #HTS-backed Syrian Salvation Government has come to a compromise resolution regarding the flying of the Syrian revolution flag.

The flag to be flown will retain the triband colors, but the red stars have been replaced by red-inked Shahada. pic.twitter.com/Pnlf5ywtxP

Translated as "I believe that there is no God beside Allah and that Muhammad is His prophet," Shahada is present on the flag of Saudi Arabia, as well as several other nations, including Afghanistan and the unrecognized state of Somaliland.

The General Syrian Conference is an organ within an opposition structure, akin to a constituent assembly. Back in 2017, the Conference formed the so-called Syrian Salvation Government, a ruling body of the opposition.

"For a group that has been designated a terrorist organization internationally, HTS's integration into the Syrian rebellion is key to its survival. A group that is flush with its Syrian opposition surroundings is one that cannot be easily isolated and destroyed," reads commentary by Heller.

"HTS's fusion of jihadist and Syrian rebel rhetoric, on display in its recent video, evidences the group's duality," Heller continues. "It is also part of how the group frustrates attempts to separate it from its Syrian context, by policing opposition discourse and deterring Syria's other rebels from turning against it."

If Heller's analysis is to be believed, HTS leaders despise their revolutionary counterparts for their willingness to reconcile with the Syrian government.

© AP Photo / Syrian Civil Defense White Helmets
Evidence Shows That White Helmets Is Branch of al-Nusra - Russian Foreign Ministry
In a video recorded earlier in September — just as Russian President Vladimir Putin and Turkish leader Recep Tayyip Erdogan negotiated a truce in Idlib — the leaders of HTS were seen discussing the ideology of the group. Talking about non-radical revolutionaries, the leaders openly expressed their distrust, if not open animosity.

"[They're] the first ones to jump into the regime's embrace," one participant said in the video.

"That's why, in reality, they're the enemy. We need to call these things by their names. They are munafiqoun. We need to label them as God Almighty did," another suggested, using a term that officially translates as "hypocrite," but is closer to "traitor."

The change of flag could signal the opposition's sway toward jihadism, although underlying reasons for such a step remain unclear. One idea put forth by an unnamed source suggests that Hayat Tahrir al-Sham is no longer pretending to be the "good guys" as an appeal to other radical islamists.

"Seems like the money from US/Europe stopped, thus FSA no longer cares about appealing to westerners," one Twitter user commented, referring to the Idlib-besieged opposition as Free Syrian Army.

Seems like the money from US/Europe stopped thus FSA no longer cares about appealing to westerners pic.twitter.com/wPUYhfaTUU