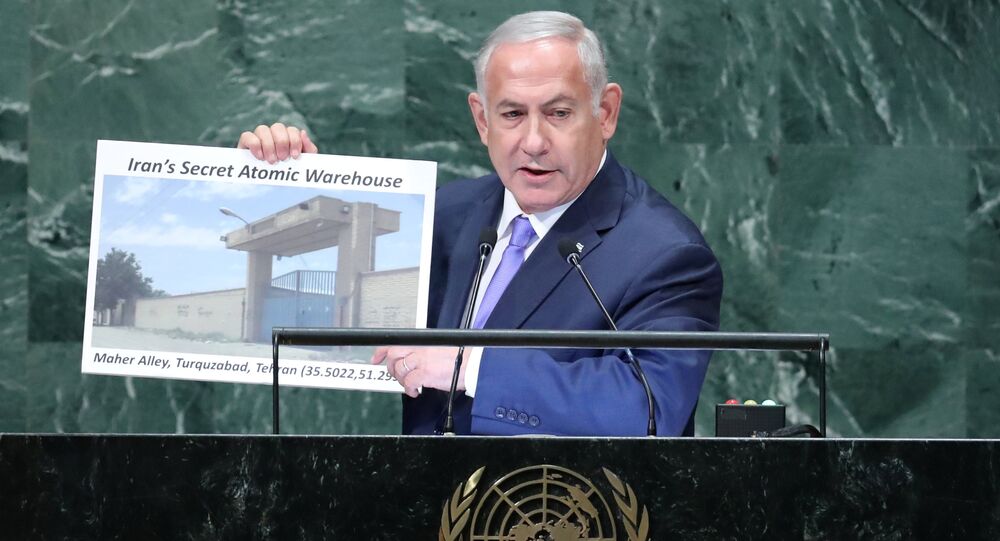 Iranian, US Officials Push Back on Netanyahu’s Claims of New Nuke Warehouse

The prime minister called on the International Atomic Energy Agency (IAEA), a United Nations group, to immediately inspect the location. A US State Department official has also called on the IAEA to investigate Netanyahu's claim, according to Reuters. Not everyone, however, is buying it. The atomic inspection agency has repeatedly said Iran is in compliance with its nuclear obligations — still in effect with France, Britain, Germany, China and Russia — as recently as this summer.

Israel itself is exempt from inspections by the IAEA because it is one of four UN members to have never accepted the Non-Proliferation Treaty. Israel has also successfully defeated UN resolutions to bring it into compliance with the treaty.

Netanyahu said the warehouse in question once held some 33 pounds of radioactive material. "I am disclosing for the first time that Iran has another secret facility in Tehran, a secret atomic warehouse for storing massive amounts of equipment and material from Iran's secret nuclear program," he said.

"He's obviously being utterly dishonest, as he always is," Mohammad Marandi, a professor at Tehran University, told Sputnik News. "He's the person who 30 years ago, almost, back then was saying that Iran would have a nuclear weapon in a couple of years — he's been saying that for 30 years now."

In 1992, after his tenure as Israeli ambassador to the UN, Netanyahu was a member of the Knesset, and he told the body, "Within three to five years, we can assume that Iran will become autonomous in its ability to develop and produce a nuclear bomb." In 1995, he wrote in a book that "the best estimates at this time place Iran between three and five years away from possessing the prerequisites required for the independent production of nuclear weapons." In 1996, he delivered foreboding remarks to a joint session of US Congress. In 2009, as a candidate for prime minister, Netanyahu warned a US Congressional delegation that Israeli experts "say Iran was probably only one or two years away" from a nuclear weapon, according to a US State Department cable released by Wikileaks.

Israeli media, for its part, has been trumpeting claims about Iranian nuclear capabilities that have never proven accurate since 1984 during the Iran-Iraq war.

In 2012, Netanyahu warned that Iran was "just a few months away" from reaching nuclear capabilities and then later in the year told the UN that Iran was less than a year from being able to construct an atomic weapon, using a cartoon-style depiction of bomb to make his case.

The UN speech was derided by everyone from Israeli media to, years later, the Obama White House, which signed the Joint Comprehensive Plan of Action (JCPOA), or Iran nuclear deal.

Just over one week before US President Donald Trump's decision deadline on whether to pull out or continue US involvement in the deal, Netanyahu gave a televised presentation from Tel Aviv, complete with props and a backdrop of Powerpoint slides, claiming to have evidence of Iran's secret development of a nuclear bomb in violation of the JCPOA. "Tonight I am here to tell you one thing: Iran lied. Big time," he said.

Later that same day, US Secretary of State Mike Pompeo declared that Iran "lied about their program to the six nations who negotiated the Iran nuclear deal."

"The documents obtained by Israel from inside of Iran show beyond any doubt that the Iranian regime was not telling the truth. I have personally reviewed many of the Iranian files," Pompeo wrote.

"It's proven right what Israel has done today with the news conference. And Prime Minister Netanyahu just gave a very — I don't know if everybody has seen it, but I got to see a little bit of it. And that is just not an acceptable situation," Trump said hours later at a press conference in front of the White House.

Trump did pull out from the Iran nuclear deal on May 9, and he cited Netanyahu's presentation in his comments afterward. "Last week, Israel published intelligence documents long concealed by Iran, conclusively showing the Iranian regime and its history of pursuing nuclear weapons."

In July of 2018, Netanyahu was captured on camera bragging, "We convinced the US president [to leave the deal], and I had to stand up against the whole world and come out against this agreement."

Perhaps due to the history of Netanyahu's of false statements on the issue, not every US official is eating up his claims like the president and his secretary of state. One anonymous US official told Reuters that the facility identified by the prime minister is actually filled with "records and archives" from Iran's nuclear program. Another intelligence official said Netanyahu's comments were "somewhat misleading."

"We have known about this facility for some time, and it's full of file cabinets and paper, not aluminum tubes for centrifuges," the second official said.

In Marandi's remarks to Sputnik News, he also accused Netanyahu of hiding the fact that Israel has nuclear weapons. According to an email written in 2015 by former Secretary of State Colin Powell and leaked in 2016 by DCLeaks, "The boys in Tehran know Israel has 200 [nuclear weapons], all targeted on Tehran, and we have thousands."

Because of this, Powell argued, "Iranians can't use one if they finally make one."

The Israelis "have really nothing to complain about," Marandi told Sputnik News.