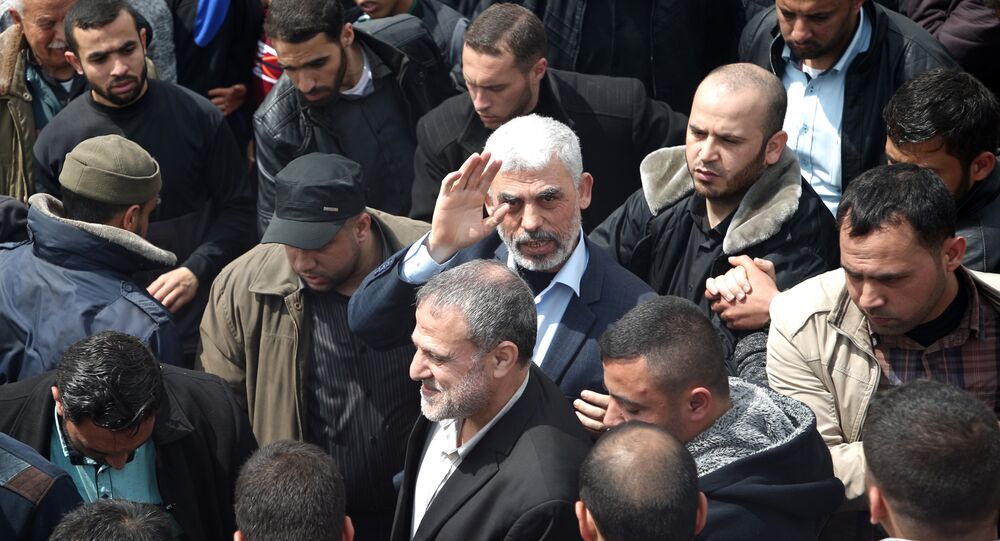 The United States and Egypt are trying to ramp up pressure on Palestinian President Mahmoud Abbas to reach an agreement on restoring calm to Gaza and to have the Palestinian Authority gradually reassume responsibility for the long-troubled enclave.

On Wednesday, the leader of Hamas in the Gaza Strip, Yahya Sinwar, said that negotiations were underway on reaching a ceasefire deal with Israel even without an agreement on a long-term truce, the Israeli newspaper Haaretz wrote.

© AP Photo / Adel Hana
Hamas Urges Palestinian Leader to Avoid Sanctioning Gaza Over Attack on PM
He warned, however, that "all of the missiles that the Palestinian resistance fired [at Israel] during the 51 days of the last war [in 2014] it can fire in five minutes."

Sinwar noted that he had conveyed a message to Israeli through intermediaries about Hamas’ ability to cause “six months of rising and falling air raid sirens" in the Tel Aviv area.

"We don't want a military confrontation, but we are not afraid of one," he added.

Mentioning the ongoing Egyptian- and UN-mediated talks with Israel, Yahya Sinwar raised the possibility of progress on the return of two Israeli civilians currently being held in Gaza and of the remains of two Israeli soldiers killed in combat there in 2014 in exchange for the release of Palestinian prisoners being held in Israel.

According to the Palestinian news agency Ma'an, even though Sinwar said that the possible exchange was not linked to contacts with Israel on a long-term cease-fire, a temporary truce could be reached even in the absence of reconciliation between Hamas, which is in control in Gaza, and the Palestinian Authority in the West Bank.

He mentioned Egypt’s desire to pursue such a deal.

In a statement on Wednesday, which came shortly after Egyptian President Abdel-Fattah al-Sissi had spoken to Palestinian President Mahmoud Abbas about Gaza, the United States chided Ramallah for refusing to make peace with Hamas in order to restore calm to Gaza and gradually reassume responsibility for the enclave.

Tensions on the Israeli border with Gaza flared up during the Great March of Return rally, which began on March 30 on the 70th anniversary of the foundation of Israel and in protest against the moving of the US embassy to Jerusalem, which Palestinians consider to be their capital.

Hamas seized control of Gaza from the Palestinian Authority in 2007 following Fatah’s defeat in the 2014 parliamentary elections.

Peace At Last? Israel and Hamas Come Close to Breakthrough on Ceasefire Deal