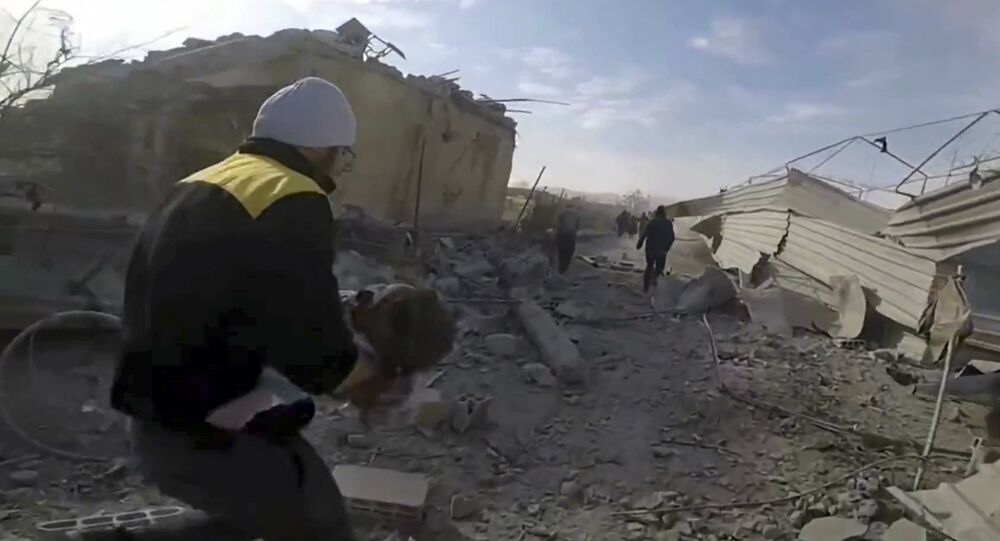 TEL AVIV (Sputnik) - Israel has evacuated members of the White Helmets and their families from Syria at the request of the United States, Canada and European countries, Israeli Foreign Ministry spokesman Emmanuel Nahshon said on Sunday.

"Upon request of the US, Canada and European states Israel has completed a humanitarian effort to rescue members of a Syrian civil organization ('White Helmets') and families. They were evacuated from the war zone in southern Syria to a neighboring country," Nahshon said on Twitter.

The Israeli Defense Forces (IDF) earlier said that they had evacuated members of an unnamed local civil organization from southern Syria. According to the IDF, people were evacuated from the war zone in Syria's south due to an "immediate threat to their lives."

RESCUED: @SyriaCivilDef faced an immediate threat to their lives in Syria. We rescued hundreds of them and their families. They passed through Israel and are now out of harm's way. We conducted this life-saving mission at the request of the US, Canada, and EU countries.

Separately, German newspaper Bild reported that Israel had evacuated nearly 800 personnel and families of the White Helmets from the southwest of Syria to Jordan, where they would later be transported to Great Britain, Canada and Germany.

The evacuation reportedly began at 9:30 p.m. local time on Saturday evening, when the United Nations assisted the White Helmets personnel to safely cross into the contested Syrian region of the Golan Heights.

According to Bild, the evacuation was negotiated between the United States, Russia and the Syrian authorities.

Its 5am here in Israel now. We are at the border crossing to jordan. Many busses with white helmets plus families arrived. @BILD pic.twitter.com/RNHKlixmNK

On Monday, CNN reported, citing sources, that the evacuation of about 1,000 White Helmets and their families from Syria had been discussed during the NATO summit last week amid the progress the Syrian government is making in regaining control over the rebel-controlled regions.

Several days ago President Trump contacted me, as did Canadian Prime Minister Trudeau and others, and requested that we assist in evacuating hundreds of White Helmets from Syria. These are people who have saved lives and whose lives were in danger.

At the same time, the Jordanian Foreign Ministry said in a press release that Amman had allowed the United Nations to arrange passage for some 800 Syrian refugees, including members of White Helmets, through its territory for their further resettlement in Western countries that have agreed to accept them.

"The [Jordanian] government allowed the UN to organize passage of about 800 Syrian citizens through Jordan for their naturalization in Western states after the three Western states, namely the United Kingdom, Germany and Canada, proposed in writing… to undertake their resettlement for a certain period of time due to the threat to their lives," the ministry's press release obtained by Sputnik reads.

© Sputnik / Morad Saeed
US Plans to Resume Support for White Helmets Despite Alleged Ties to Jihadists
According to the statement, Amman agreed to provide the passage solely on humanitarian grounds.

Jordanian Foreign Minister Ayman Safadi said in late June that his country would not accept refugees from southern Syria and that its border would remain closed, adding that Jordan’s efforts were aimed at the prevention of violence and support for political reconciliation in Syria.

Canada Ready to Accept Up to 50 White Helmets

The government of Canada has agreed to accept up to 50 activists of the White Helmets non-governmental organization and their family members, who were recently evacuated from Syria during a secret operation, CBC broadcaster reported, citing sources.

According to the broadcaster, in total, Canada may accept 250 people and the authorities are expected to immediately start talks with UN officials in order to organize their transfer to Canada. The process may take up to several months.

The White Helmets volunteer group considers itself a non-governmental organization aimed at protecting Syrian civilians. However, Syria's President Bashar Assad says that the group is affiliated with the al-Qaeda terrorist organization.

Moscow and Damascus have accused the White Helmets of helping to stage a chemical attack in Eastern Ghouta’s Douma on April 7 that prompted the United States, the United Kingdom and France to launch more than 100 missiles on multiple targets in Syria one week later.