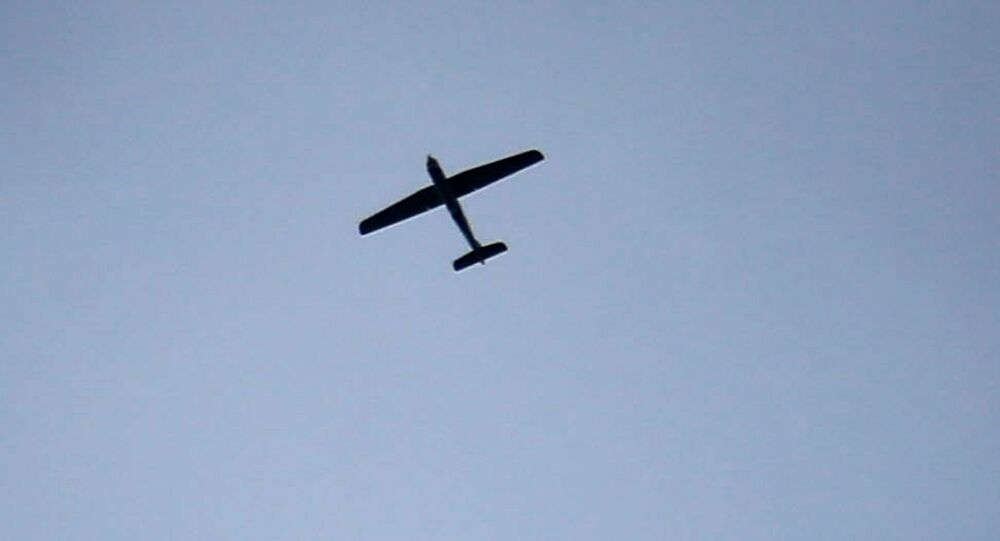 According to the Russian Center for Syrian Reconciliation, militants are continuing to deploy drones near the Hmeymim airbase in Syria.

A drone launched from a militant-controlled area was detected and destroyed near the Hmeymim airbase in Syria, according to the Russian Defense Ministry's Reconciliation Center.

"From the territory occupied by militants, launches of unmanned aerial vehicles in the direction of the air base Hmeymim are not stopping. On the night of July 21, air control at the Russian Hmeymim airbase detected a UAV launched from territory controlled by illegal armed groups in northern Latakia," the statement read.

The center added that the drone was destroyed sufficiently far from the airbase, thus there were no casualties or material damage.

"The Russian Hmeymim airbase is working according to its standard mode of operation," the statement said.

© Photo : Russian Defense Ministry
Drones Shot Down Near Russian Base in Syria Were Western-Made – Source (PHOTOS)
READ MORE: Russian MoD Dismisses Reports of Casualties Among its Servicemen in Syria

Russia launched a military operation against terrorist groups in Syria in September 2015 at the request of Syrian President Bashar Assad.

Moscow has also been providing humanitarian aid to residents of the war-torn country and is also a guarantor of the ceasefire regime in Syria, along with Turkey and Iran.

Militants in Syria's Idlib de-escalation zone have refused to allow humanitarian aid provided both by the Russian side and the Syrian authorities to pass through areas under their control, the Russian Defense Ministry said in a daily bulletin.

"Despite the extremely difficult situation to provide the population in the Idlib de-escalation zone with food and medicine, the leaders of illegal armed formations are refusing to allow humanitarian aid from the Russian Reconciliation Center and from the Syrian authorities to the areas they control," the bulletin said.

© AP Photo
Thousands of Syrians From Towns in Idlib Are Set for Evacuation - Reports
According to the document, over the past 24 hours, illegal armed groups in the southwestern de-escalation zone have handed over three tanks, one anti-aircraft gun, four mortars, one howitzer, four heavy machine guns, as well as a large number of various types of ammunition.

"Only in the past day, 105 people returned to their homes. Over the past day, Russian military medics provided medical assistance to 13 Syrians, including six children," the document added.

Civilians are continuing to leave militant-controlled areas through established humanitarian corridors, with over 300 people having been withdrawn from the area through the Kafer-Shams checkpoint over the past 24 hours.