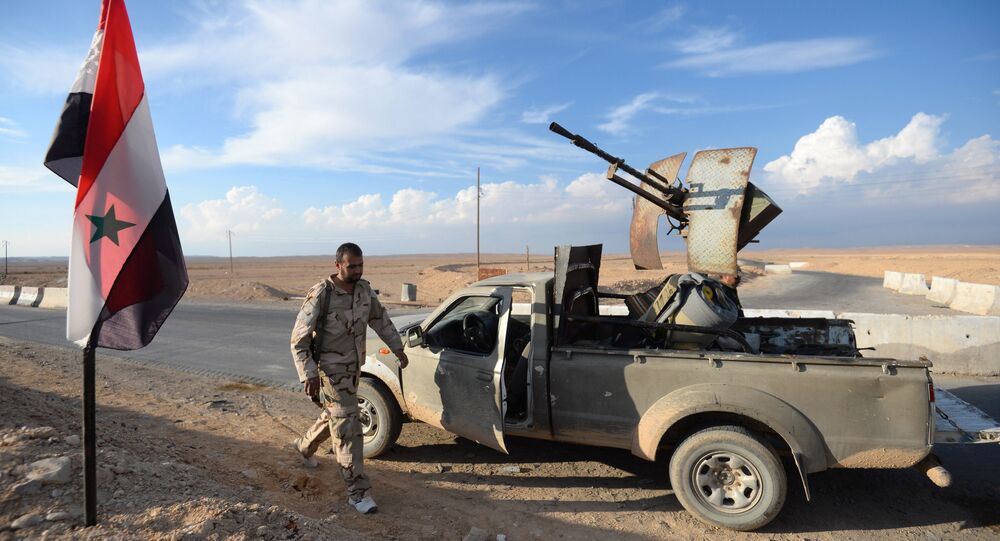 A Sputnik correspondent has received an exclusive first-hand look at the situation in the large, sparsely populated but strategically crucial desert territories in the Badia (the Syrian Steppe) following its liberation from jihadists.

Traveling from Palmyra in central Syria to the border with Iraq and the so-called 55-kilometer "security zone" around the US base at Al-Tanf in the country's south, journalist Mikhail Alaeddin surveyed the situation on the ground now that the Daesh (ISIS/ISIL)* caliphate has been smashed.

"On the road from the city of Homs to Palmyra I recall last year's experiences. Today, the road is paved with descent asphalt, without pits or burnt-out cars on the roadside. Last spring, the day Palmyra was freed from the terrorists, after slamming into a pit from a mortar shell, my car lost a wheel," the journalist recalled.

© Sputnik / Mikhail Voskresenskiy
Syrian Army Prevents Attempted Offensive Towards Palmyra – Russian Military
"At first glance, Palmyra has changed little. However, now, when you pass through the historical complex and the city itself, you see the signs of peaceful life which, like the buds on trees in the spring, hint at a coming flowering," he added.

"Yes, peaceful life is returning to our city, and we have returned," a local resident, Abu Hamza, told the journalist. "Our home is here; we are restoring it little by little. In Homs, where we fled from the terrorists, we felt a burden to our relatives. But here everything is our own," the resident added.

It's too early to talk about a real return of peace, Abu said. The city is filled with many bombed out and looted buildings. "But one can live here already," he explained. The authorities have taken to the task of restoring the infrastructure, including electricity, water supply and sewage. The threat of another terrorist incursion has subsided, with Daesh having been pushed back to the north of Deir ez-Zor over 200 km to the northeast.

In the evening, the Sputnik correspondent met up with a Hezbollah fighter who called himself Ali. The Lebanese militia group joined the war in Syria in 2012, motivated by the argument that if terror wasn't stopped in Syria, it would come to Lebanon.

Alaeddin asked Ali what he was doing in the center of Syria, some 200 km from his home country.

"You're a strange guy," the militant quipped. "When the Soviets were fighting the fascists in WWII, did it stop when it reached the border? No, the Red Army did not stop until it reached Berlin and completely crushed the enemy. We are fighting Daesh. Of course this is incomparable with the Soviet feat, but we, together with the Syrian Army, started to defeat the terrorists near Damascus, and today have reached the Iraqi border. It's necessary to clear the whole of Syria, without exceptions, and Hezbollah only assists the Syrian Army in this matter," Ali explained.

© AP Photo / Bassem Mroue
Hezbollah fighter looks toward Syria while standing in the fields of the Lebanese border village of Brital, Lebanon. (File)

The Syrian military recently announced a sweep of a strip of the Badia stretching several thousand kilometers from At-Tanf to Al-Bukamal.

Ali and local Syrian forces agreed to take the correspondent on a ride through the desert. "You're in luck. They're going now to rotate the group on the border; we will go with them. … The escort is good; the guys are experienced. Although the desert has been cleared, from time to time you'll still find 'nomads' who want blood," Ali said after finishing his morning prayer and inviting the journalist into a vehicle.

"The road from Palmyra is quite monotonous, consisting of a desert, colored by the rare oasis, where army positions are based," Alaeddin wrote. "It is here on these sandy expanses that a considerable part of Syria's oil and gas are extracted. Through this desert, pipelines from north of Deir ez-Zor carrying natural riches to major stations stretch into the center of the country."

On the eastern shore of the Euphrates are the large Koniko and Omar oil fields, controlled by the US-allied Syrian Democratic Forces. West of that, the Syrian government has re-established control.

© AFP 2021 / STRINGER
A picture taken on July 9, 2017 shows the damage at Syria's Arak gas field, 35 kilometres (20 miles) northeast of the ancient city of Palmyra, in the central province of Homs, a few weeks after it was retaken by government forces from Daesh terrorists

"On the road, we spoke of Syria's peaceful future, and Russia's role in the victory over terror. Finally, our column makes it to the last strong point. A local commander greets us, pointing with his index finger: 'It's 6 kilometers to Iraq and 55 kilometers to the US base at Al-Tanf," he said.

There, according to the officer, the militants feel at home, engaging in joint patrols with US forces and periodically violating the buffer zone.

"Daesh tried to attack our strongpoint a couple weeks ago," the officer recalled. "We chased after them as far as we could, but they disappeared into the Al-Tanf zone; apparently they do not touch them there. Before that, mobile terrorist groups came by jeep from Iraq, but now the Popular Mobilization Forces [Iraqi Shiite militia] has strengthened border security, and the enemy doesn't poke his nose in here anymore," he added.

© AP Photo / Hammurabi's Justice News
In this photo taken on Tuesday May 23, 2017, provided by the Syrian anti-government activist group, the Hammurabi's Justice News, which has been authenticated based on its contents and other AP reporting, shows a U.S.-backed anti-government Syrian fighter form Maghaweer al-Thawra stands on a vehicle with heavy automatic machine gun, left, next of an American soldier who also stands on his armored vehicle, right, as they take their position at the Syrian-Iraqi crossing border point of Tanf, south Syria
© AFP 2021 / IAKOVOS HATZISTAVROU
UK Warplanes Bomb Pro-Gov't Forces in Syria Following Attack by 'Unidentified Force'
The size of the desert is a headache for Syrian forces, the commander explained. Having lost control of the cities, Daesh switched to bandit tactics, attacking army positions in small mobile groups under the cover of night.

Pointing to a map, explaining the local military situation, the commander explained that the 55 kilometer zone around the US base had been isolated. "In the artificially created reservation at Al-Tanf, militants from a number of groups are trained under the flag of the Free Syrian Army, created under the pretext of fighting Daesh. Now, with the defeat of the terrorists, their future is unclear," Alaeddin summarized.

* A terrorist group banned in Russia and many other countries.