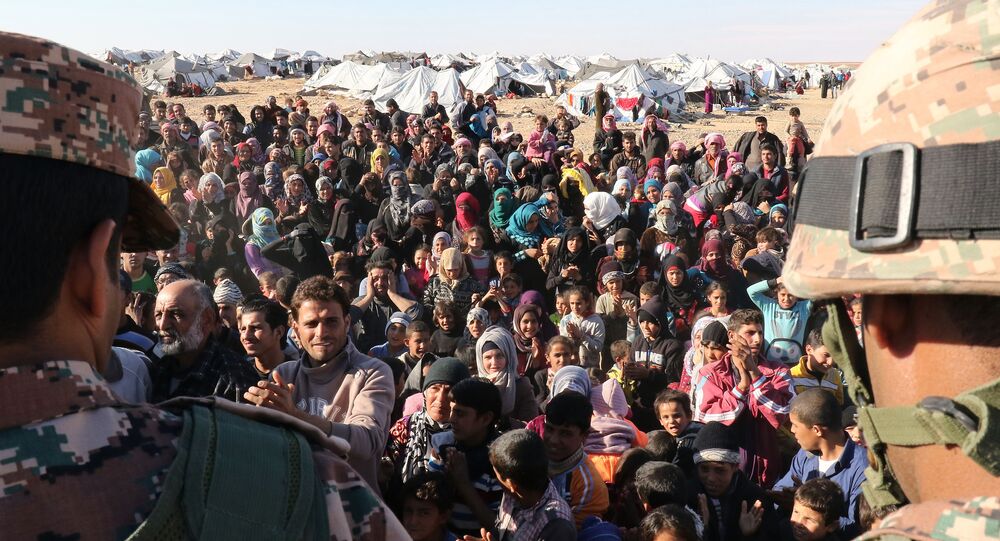 WASHINGTON (Sputnik) – A military offensive by the Syrian government has forced up to 270,000 civilians to flee toward the Jordan border, United Nations spokesman Brenden Varma told reporters on Monday

"Over the weekend we received reports that intense air and ground based strikes continued in multiple areas … resulting in the death and injury of civilians and the largest displacement in the area since the conflict began," Varma said. "Our humanitarian colleagues say that an estimated 270,000 have been displaced."

The latest estimate represented more than a five-fold increase from 50,000 migrants reported by the UN last week.

© Photo : Russian Defense Ministry
Drones Shot Down Near Russian Base in Syria Were Western-Made – Source (PHOTOS)
Many of the refugees are huddled on the Syrian side of Jordanian border crossings, with the UN providing food, medicine and other relief supplies in Jordan for Syrian aid agencies to transport across the border, Varma explained.

About two weeks ago, the government of Syrian President Bashar Assad launched an offensive to regain control of the region from a variety of terrorist groups and US-backed rebels.

Over the weekend, more than a dozen towns and villages reportedly agreed to surrender and accept government rule, according to media reports.

Several Humanitarian Corridors Have Been Opened Out — Russian Military

the Russian military's center for Syrian reconciliation said Monday that several humanitarian corridors have been opened out of the southern militant-held territories to let civilians escape the fighting.

"Over the past day, 5796 people with private properties have passed through four control posts with the terrorist-controlled territory of South-West zone of de-escalation, 428 of them sent to refugee camps Gebab and Rsas," the reconciliation center's head Maj. Gen. Alexei Tsygankov said in a briefing.

© REUTERS / Rodi Said
US Pullout From Syria Would Just Be 'Recognising Reality on the Ground' – Prof
The Russian military also discussed the issue of returning Syrian refugees who fled abroad to their home provinces.

"Working meeting with the governors of Quneitra, Daraa and As-Suwayda held on the issue of returning Syrian refugees from abroad. The governors confirmed their readiness to assist the returning citizens and their accommodation in the settlements of these provinces," Tsygankov said.